Hey Rockets fans, did you think it was going to be easy?  Do you really think the Basketball Gods would allow the Rockets to get a 2-0 lead and relax?  No way.  (And for you monotheistic readers... rest assured that there is no way in hell God would let my favorite team win without torturing me a little more.)

Enough with the blasphemy for today though...

Nothing about Game 2 surprised me.

Brandon Roy had a monster game.  LMA couldn't miss for about 10 minutes in the 2nd quarter.  Joel Przybilla established himself as the biggest non-Utah flopper this side of Manu Ginobili.

Meanwhile, the Rockets did not get the ball to Yao Ming.  At all. 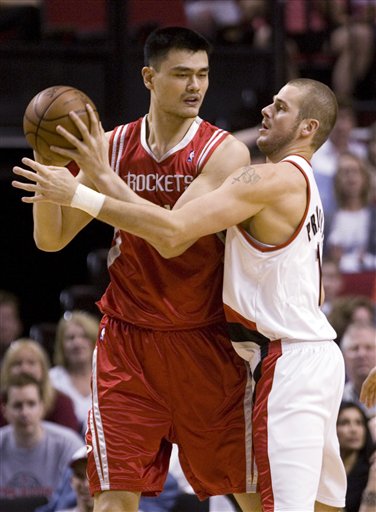 Then they missed free throws.

... and then they missed more free throws.

(Aaron Brooks of all people missed a free throw at a critical time.  It was a freakin' epidemic that only Yao was able to avoid.  Luis Scola had a real bad case of the "yips" from the charity stripe.  Even Chuck Hayes cringed.)

But, hey, we knew Game 2 would be a much tougher battle.  Brandon Roy made sure of it.  Though, it might have helped if Ron Artest didn't go underneath the pick EVERY SINGLE TIME (stop that, Crazy Pills!  Please!  Fight through it!).  Yao picking up a total bullshit fourth foul with 6:30 left in the third quarter -- hey, I sense a trend! -- and once again after a Blazer flopped.  Joel P is quite the accomplished thespian.

It's okay, we got even and flopped a couple times against Joel.  Payback is a bitch.  Problem is that Joel is nowhere near as valuable an asset to his team as Yao is to the Rockets.  It's a bad tradeoff for us.  Then again, Joel didn't foul out, so he was able to camp in the lane for about 10 seconds when Roy hit the backbreaker 3 with 2 minutes left.  That one hurt.... a lot.

And can someone please answer me this question:  Why the hell was Von Wafer removed from the game in the 4th quarter?  Our only consistent scoring threat... the guy who was continually going to the basket, drawing fouls and putting pressure on Portland?  Yeah... him.  Why did Sleepy remove him?

Lastly, it would be nice if Aaron Brooks would score his points when they are truly needed.  He got most of his stats in Game 1 when the game was decided.  And his flurry of crazy 3s tonight would have only helped if Joey Crawford didn't blow the whistle with 1.3 seconds left when Rudy tripped over his own two feet (i.e., not a foul and it should have been Rockets' ball).

It doesn't matter.... the refs are not to blame in any way, shape or form.  Not that it makes me think Joey Crawford sucks any less.  Because he sucks.  A lot.

Nonetheless, to win this series, the Rockets will have to make free throws.  Continue taking the ball aggressively to the basket.  This is good.  But no more missing 32% of your attempts (10 tonight).  They will also have to keep Portland from shooting 51% (the Rockets shot 50% but we all know the playoffs are about defense...).

Fundamentals, gentlemen.  Remember them.  You have three days.

See you Friday night for Game 3.