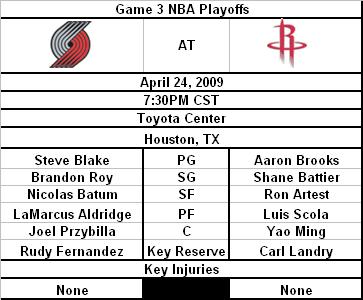 This is going to be slightly abbreviated as honestly, how much can be said for six games in a row about the same players?  After finally getting to watch Game 2 from beginning to end, whining about the refs in either game was silly.  Joey Crawford sucks, I get it.  But there were equally bad calls each way in both games, period.  The Rockets lost Game 2 because they missed 10 free throws, Brandon Roy was on fire and they decided that Yao shouldn't be the focus of the offense.  It's really that simple.

Point Guard
Brooks/Lowry vs. Blake/Rodriguez - Two games in a row the Rockets guards have outplayed the Trailblazers guards, that's not an accident.  That said, Aaron Brooks, if you wouldn't mind scoring a little earlier I'd appreciate it.  Not saying what you did wasn't good, just that it could even be better.  This match-up should continue to favor the Rockets throughout the series.  Blake cannot keep up with Brooks and he is easily defensed by Lowry.  I think he bounced back a little bit as a faciliatator in Game 2 though and that's where I expect him to be the rest of the way.
Edge: Rockets - Still there

Shooting Guard
Battier/Wafer/Artest vs. Roy/Fernandez- Brandon Roy was superstar good in Game 2, it's something that he has had the potential for and even displayed for a while.  Unfortunately he's not flashy nor is he is an extreme leaper, so the NBA has not chosen to market him as well as Wade/Lebron/Kobe.  That may come if the Blazers can get to the second round.  I'm going to rely on the defense of Battier here to even this out a bit.  Some of what Roy threw up was just him being in the zone, the defense on him at the rim wasn't great, but it was solid on him on the perimeter.  We will see if the Rockets can game plan better for him in Game 3, similar to how they did in Game 1.
Edge: Trailblazers - Did I say Brandon Roy was good?  I meant great.

Small Forward
Artest/Battier vs. Batum/Outlaw - It all lies on Artest to keep the offense flowing through Yao.  When he decides it's not going to happen, the Rockets are likely to lose.  Batum and Outlaw have been no shows in this series.  I don't think that will last the whole way, but Outlaw's strengths won't play against the Rockets on a night in/night out basis and Batum is still very young.  Ron Artest, it is up to you to be a facilitator and to play good team defense, without that, the Rockets are 40/60 to win the series even with homecourt advantage.
Edge: Rockets

Power Forward
Scola/Landry/Hayes vs. Aldridge/Frye - Aldridge had a fantastic game in Game 2 and a terrible game in Game 1.  This series he is more likely to be nearer to his season averages.  The Trailblazers did a good job of getting him quality shots and he did a good job of hitting even the ones that weren't open looks.  Scola has to win the rebounding battle over him, and I expect it to play out that way the rest of the way.  Hayes will once again be called on to put defense on Aldridge when a change of pace is needed, but Landry may be the X factor.  The Rockets need him to snap out of his funk.  I realize that's slightly insensitive, but I don't mean it that way, I just want Carl Landry to come back.
Edge: Trailblazers

Center
Yao/Hayes vs. Przybilla/Oden - Game 1 to Yao, Game 2 to the Trailblazers.  Game 3 I expect the Rockets to force the issue every single time they can.  There is no way they can allow Portland to have confidence that they can play Yao with a simple front and double team.  Yao must fight through it, and dominate.
Edge: Rockets - Biggest advantage in the lineup.  Now the Rockets just have to get their heads out of their asses and get Yao the ball.


My Prediction: Rockets win, that's all that needs to be said

Also: Tom will be at the game tonight.  He'll be the young guy in sandals, a Yao jersey, and a team warm-up jacket.  Holler at him if you see him.