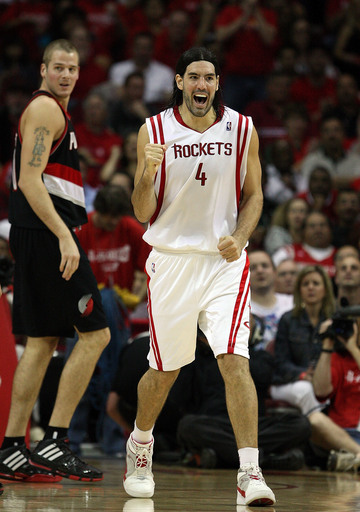 Lee didn't set up a game preview template before he disappeared for the weekend, so you don't get the usual fancy graphics today.

I heard somewhere on ESPN that the team that wins Game 3 (or has a 2-1 lead after Game 3) goes on to win the series something like 75% of the time.  Of course, the Rockets have been on the 25% side of this all too often.  It's time to make that statistic work in our favor.

Game 4 is the time when teams are truly sick of seeing each other.  Tempers may flare.  Profantities may be uttered.  Cheap shots may occur.

... and I'm just talking about my reaction in the stands if I see Steve Javie or Bennett Salvatore anywhere in the building tonight.  If they send Violet Palmer to Houston, there may be a freakin' revolt before the game even begins.

In Game 3, the Rockets remembered how to play defense and shoot free throws.  Quite simply if they keep up that formula for success, it does not matter if Yao only gets 7 shot attempts again... or that Artest doesn't score in double figures... or that Von Wafer again doesn't get enough playing time.  Defense and free throw shooting.  Also known as "fundamentals."

On to the matchups.  Again.

Point Guard
ABZ/Lowry v. Blake/Rodriguez - Steve Blake finally remembered how to shoot.  Right around the time Aaron Brooks became gun-shy.  Fortunately, Blake's final attempt in Game 3 came up about as short as John Starks' attempt did way back in Game 6 in 1994.  Thanks, Hakeem.  Anyway, I expect this to be the game where Brooks decides to be aggressive from the start.  If they try to front/manhandle Yao again, Brooks should go directly to the basket.  Do no pass Go.  Do not ask Daryl Morey for $200.  Directly.  To.  The.  Basket.  Put the Blazer bigs in foul trouble early.  Then watch how easy it will be to get the ball to Yao.  (Note:  Lowry did this in Game 2, but ABZ is the one who should dictate the pace of the game early.)
Edge:  ROCKETS.  Still.  (And I'm a huge Steve Blake fan.)

Shooting Guard
Battier/Artest v. Roy/Rudy - The story of Game 3 is that the Rockets stumbled upon a new hypothesis:  Brandon Roy is human after all.  The goal for Game 4?  More of the same.  He's going to make some shots.  Make him work very very hard to get open looks.  If they can make Yao struggle to get open shots, we can do the same for Mr. Roy.  If Roy gets 25+ shots tonight... that's bad.  Oh, and I'm not going to overlook Shane's crazy awesome 3 pointer towards the end of the last game.  The whole bar did the "no no no no... YES!" when Battier launched from 27 feet.  Hopefully we don't need a miracle shot like that tonight.
Edge:  BLAZERS.  (Roy is going to get his... and probably a lot.  if Battier/Artest can counter even slightly... Rockets win.  It really is that simple.)

Small Forward
Battier/Artest/Landry v. Frenchy/Outlaw - Here is where the Rockets should be exploiting the mis-match more.  Early in the game, the Blazers have an effective offensive sinkhole at the small forward position.  Batum is a decent defensive player.  He's got some talent.  He also averages about as many points per game as I do.  The problem is that Artest is going to take some crazy shots... and he's either going to make them or give me a heart attack.  I can never guess which.  Batum has been a surprise in keeping Artest away from the rim for extended stretches.  Now's the time for Crazy Pills to attack the rim and ignore the arc.
Edge:  ROCKETS.  (Though I do expect Travis Outlaw to have a big game tonight.)

Power Forward
Scola/Landry/Hayes v. LMA/Frye - The Rockets have a three-headed monster at this position (and to think it was our supposed weakness two years ago).  The Blazers, meanwhile, will run Aldridge into the ground in this series.  Do not expect to see much more of Channing Frye.  Scola and Landry lick their chops with Frye in the game.  Scola was the Rockets best player in Game 3.  Landry was the key reserve.  Landry says he is 100% recovered from the gunshot wound.  This is huge.  With Dikembe out, we may see Scola/Landry or Landry/Hayes both paired on the court at the same time.  How the Rockets do offensively during these moments could be a turning point in the game.  Oh, and LMA still scares me.  Why we don't just glue Chuck Hayes to him at the end of the 2nd half baffles me.
Edge:  ROCKETS.  I am not the LMA homer that Lee is.  Scola + Landry > LaMarcus.  Math is fun, kids.

Center
Yao.  No one else matters.
Seriously, I am sick of this.  Adelman has got to find a way to get the ball to Yao.  Fronting defenses have been around since the era of George Mikan.  Yet Sleepy acts surprised every time Portland refuses to be nice and play behind Yao.  Draw up a freakin' play... slow down Portland's intent to "overplay" every pass.  A modified Princeton offense would keep Joel P where he belongs... on the bench with foul trouble.  And Oden would pick up a foul on his way to the scorer's table to check in.  Game, set, match.  Alas, Rick Adelman wants to make this difficult.
Edge:  ROCKETS.  The fact that it is not "BIG EDGE" to the Rockets or "MAJOR ADVANTAGE" speaks volumes though.  Yao has to be a bigger contributor tonight.  Somehow.

Lee and I will both be at the game tonight.  Yes, having playoff tickets is nothing less than freakin' awesome.  Especially when the home team wins.  I think I'll break out my Carl Landry #14 jersey tonight.  He's a badass who is going to have a big game.  I just sense it.