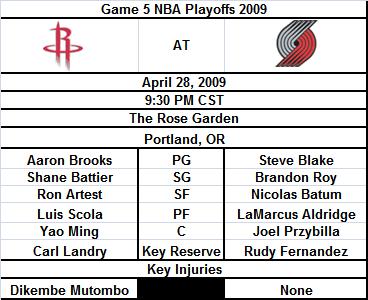 Point Guard
Brooks/Lowry vs. Blake/Rodriguez - Blake had a much better game in Game 4, and I'd even give him the advantage for that game, however, that's 3 games to 1 now and Aaron Brooks is back in Portland.  How about this Kevin Pritchard: you give us Bayless, you get Brooks.  He gets to play where he puts up 20 a game, and the Rockets get a big upside guy, it's win/win!  In all seriousness, Aaron Brooks will likely be his first 2 games self tonight and I expect that to be a huge difference for the Rockets.  And I wouldn't expect either of the Rockets point guards to miss any more free throws.  If they do, I want them running laps, it's that bad.
Edge: Rockets

Shooting Guard
Battier/Wafer/Artest vs. Roy/Fernandez- Brandon Roy did exactly what he should do in Game 4:  Take the ball, run to the basket, draw the foul.  It's the simplest play in basketball when you are good at ball control.  He should never go away from that, no matter what for as long as he can in his career.  It's a full proof plan and one that Battier and Artest can't really stop.  That said, they can completely slow him down, and regardless of his points total, he was slowed in Game 4, and halted in Game 3.  Ultimately, Roy is going to get his points, it's about keeping him from facilitating for other players and that's what Batt-man and Ron Ron have done so well in this series.
Edge: Trailblazers - Seriously, Brandon Roy is every bit as good as D-Wade, it's time people recognize it

Small Forward
Artest/Battier vs. Batum/Outlaw - I was asked why Batum started over Rudy Fernandez today, and it seems like it's only because the Blazers want Fernandez's scoring off the bench, ala Manu Ginobli.  It's a pretty solid strategy, they just need to trust Rudy Fernandez to be the guy if that's the case.  I'm not completely sold that McMillan does trust him but it's coming with every big shot he hits.  I could not be more impressed with Fernandez when they let him roam free.  For all the Blazers Batum fans, I'm just not seeing it guys, and I'm hoping I don't for the rest of the series.  Ron Artest has been incredibly solid except for a couple of 5 minute stretches in this series.  He's been calm and slowly has gotten in the heads of the Trailblazers team.  It's been pretty fun to watch.  His stats are not there offensively, but a lot of that is because Scola, Battier, Brooks and Lowry have stepped up.  His assist numbers are up to almost 5 per game though, and that is a testament to how good of a passer he is when he chooses to be.
Edge: Rockets

Power Forward
Scola/Landry/Hayes vs. Aldridge/Frye - In games one through three of this series I put the edge to the Trailblazers in this category.  I was doing that completely on the basis of LaMarcus Aldridge and not looking at the whole picture because typically, I do these previews on a starter vs. starter basis.  Luis Scola along is averaging 16.8 and 7.5 while Aldridge is at 16.5 and 8.3.  When you throw in Landry's contributions and Hayes' defense, this leans towards the Rockets a bit.  Scola has come alive in the playoffs, and I hope it's that way for the rest of his career.  Opposing teams fans may hate him, but he is everything that is right about basketball.
Edge: Even

Center
Yao/Hayes vs. Przybilla/Oden - This has been a fantastic series because of all the little things that have gone on.  I think the two biggest outcomes will be (regardless of the series winner) that 1.  Portland will be playoff tested next season for sure, I certainly would want nothing to do with them and 2.  Yao Ming had a chance to really work on the fronting/double team defense and Rick Adelman finally worked out an offensive tweak that allows the Rockets to take advantage of it.
Edge: Rockets


My Prediction: Rockets make it tough, Blazers take a 9 point lead in the third and the Rockets fight back.  It will end with a close score and the Rockets will have a chance to win it.  I think the Blazers should win the game, will they though?