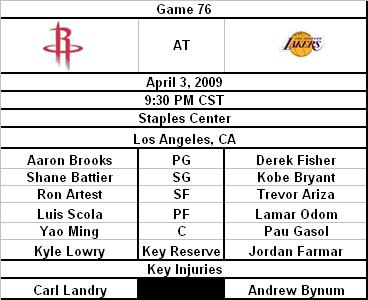 Point Guard
Brooks - Aaron is so tough for me to figure out.  I know he's small, but Nash isn't big and he doesn't play defense.  Brooks can pass well, and when he goes into that mode he's very good, but he picks and chooses when to do that in odd fashion.  I guess I'm just dealing with a second year player that is not above 6 feet tall.  I just get this big feeling that Kyle Lowry should be starting, if for nothing else but to get Brooks back into "I can prove I'm the starter" mode.
vs.
Fisher - He doesn't turn the ball over much, but then again, Kobe has the ball in his hands 80% of the time.  I've been indifferent to Fisher since 04-05, if he played for anyone but the Lakers at this point people would ride him mercilessly.  Instead, he's "solid".
Edge: Even - Basically a wash statistically, Fisher's not fast enough to use his strength on Brooks anymore

Shooting Guard
Battier - Shane has been on absolute fire in the last 5 games shooting 14-22 from the 3 point line and 20-30 overall.  I know I put something like that in the last preview, but he got even better against the Suns.  It's encouraging that he is playing this well and if the rest of the team can take advantage it could be the difference tonight.
vs.
Bryant - One of the hardest working profesional athletes around.  This season he has kept his mouth completely shut and let his play, and his team's record, speak for itself.  I don't understand people that loved Jordan but hate Kobe, they are effectively the same guy.  An argument could be made that Kobe is actually the nicer, kinder and gentler of the two.  I guess it's the Lakers thing, but come on, Kobe is a phenomenal player and he's one of the best of all time already.  And don't forget, he's only 30 and has a good 5+ years left in the league.
Edge: Lakers - The Rockets hope here is to get Kobe shooting.  If he takes 25+ shots in this game I'm calling it a Rockets victory.  Shane can guard him, but Kobe can be vain and make sure he gets his 25 points.  That's what you have to do, challenge him.  For everyone that got mad at Ron Artest last game, that's just silly.  Ron did exactly what you have to do to the Lakers, make Kobe a one man machine.  The problem was that the Rockets were not executing on offense, not that Kobe went off.

Small Forward
Artest - I've been firm in my stance that I want Artest back next year, that's not changing, but sometimes he makes me want to throw things at my television (Note to the 50 incher: It's okay big guy, I wouldn't hurt you).  His shot selection, even going 50% from the field was awful against the Suns.  I really, truly believe he will see the light, but I thought that with McGrady too and it never happened.  Why will no one in the media ask him the point blank question: "Ron, why do you take such ill advised shots"?  Why doesn't Rick Adelman ask him for that matter?  All that being said, I still love the guy and am happy to call him a Houston Rocket, he does all of the other things on the court well.  And I overheard Richard Justice saying that Ron is not a good passer, that's just about as incorrect a statement as can be said.
vs.
Ariza - He's a good player, not as good as Lakers fans think, but good.  He's fun to watch and plays hard.  I like just about everything about him as a player (don't know anything about him off the court).  He's having a career year across the board and is basically what I think Von Wafer can be for the Rockets.
Edge: Rockets

Power Forward
Scola - One of the worst games Luis Scola has ever played in his life happened on Wednesday night.  I don't think we'll ever see that from him again.  He was more tentative on offense then he was when Rick Adelman first let him play as a rookie.  He got the ball, he just chose to get rid of it.  No, it wasn't in great position, but Luis is a decent dribbler and could have taken it to the basket numerous times but did not.  He's going to have a big game against the Lakers, I'm sure of it.
vs.
Odom - I think of Lamar Odom as one of the biggest underachievers around.  His skill set is absolutely sick.  He can do everything under the moon but just doesn't.  Yes, he's a good player, but he's having his worst year as a pro statistically.  Some of that is his role in the offense and some of it is his coming off the bench for a good chunk of the season, but really he should have scored more in that role, not less.
Edge: Even, actually, I'd give it slight edge to the Rockets

Center
Yao - He had a really good game against the Suns, but the Rockets simply did not get him the ball enough on offense.  Part of that was from fatigue due to the offense that the Suns run, though he should have been well rested.  The Rockets have little to no chance to win this game if his teammates do not get him the ball.  The Lakers likely won't do more than flash a double team at him, and if Kobe comes to double they should have a way to deal with it after seeing it the last time out.  It should leave Battier and his recent 60% shooting from the three point line open.
vs.
Gasol - At the 4 he's deadly against the Rockets, at the 5 he may put up similar numbers but won' have the same impact.  Yao can defend him, because while he has some range, he's not going to step out beyond the three point line.  Yao can frustrate him on both ends of the court.
Edge: Rockets

Injuries/Suspensions
Houston Rockets
OUT - Carl Landry is still out, no timetable has been set for his return.
Los Angeles Lakers
OUT - Andrew Bynum - He's expected to come back before the end of the season for a few games, but won't be playing tonight.

My Prediction: Rockets are going to lose this one, the Lakers haven't been playing well, but they know this game is important and will be on top of their game.  But maybe, just maybe Shane can do this and the Rockets can sneak one in on them.