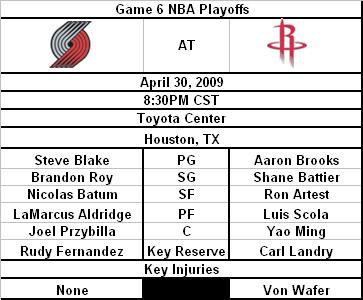 Alright, it's Game 6, the game most Rockets fans have said they would win the series in.  So far it has gone according to plan.  Of course Von Wafer is going to be out just to make it interesting.  I'm going to keep this short, we all know the match-ups at this point, so I'm going to point out some things to look for tonight, and maybe even some wishful/hopeful thinking.

Point Guard
Brooks/Lowry vs. Blake/Rodriguez - Brooks and Lowry, I need a favor.  Your heads are in this place on the wrong side of your bodies.  You have had some really good games this series, it's time to revert back to those.  I'm not saying you are the reason the Rockets lost, I'm saying you are one of the reasons they didn't win.  Oh, and that Steve Blake guy?  I know he had some tough games early, but in Games 4 and 5, that's who he is.  If you wouldn't mind guarding him, that would be really sweet of you.
Edge: Rockets - Brooks and Lowry WILL step up tonight, I have no doubt

Shooting Guard
Battier/Barry/Artest vs. Roy/Fernandez- In my mind, Roy is going to get his points, what's important is for Battier and Artest to stop Rudy Fernandez.  No Von Wafer tonight will really hurt if Rudy is allowed to score more than 10 points.  Battier and Barry are going to have to counter with about 18 points between the two tonight.  For some strange reason I think they are both up to that challenge on the offensive end.
Edge: Trailblazers -  Paging the No Stats All Star, I want to see all of your defense you have at your disposal tonight

Small Forward
Artest/Battier vs. Batum/Outlaw - It's time Crazy Pills, officially.  You've been storing up actual shot making all series, it's time to unleash it.  Batum isn't going to do much and Outlaw doesn't like you being physical with him.  It's time to unleash the fury.  Dunk on some fools, have fun, get to the second round, get money
Edge: Rockets

Power Forward
Scola/Landry/Hayes vs. Aldridge/Frye - Scola was killing it in Game 5, then the Rockets went away from him.  Granted, they did so to get Yao involved, so that's okay.  But when you took Yao out of the game/ couldn't get him the ball, why didn't you go back to Scola?  Aldridge was also on fire in Game 5 and has been good to great this series.  He's not playing a ton of defense as usual, though he is working the help defense well.  This matchup will not decide the series unless Carl Landry decides to show up full on for 20 minutes tonight.
Edge: Even - It's been proven to be so

Center
Yao/Hayes vs. Przybilla/Oden - I have a theory about Bennett Salvatore being the head official tonight.  Every second that Kobe Bryant and the Lakers aren't playing the NBA feels that it is losing money.  Maybe tonight is the night the Rockets finally come out on the good end of the worse official to ever step foot on a court.  We'll know in the first quarter.  Oden could foul out in 7 minutes tonight if that is the case.
Edge: Rockets - 32 and 15, book it

Houston Rockets guard Von Wafer has been ruled out for tonight's Game 6 playoff contest against the Portland Trailblazers due to muscle spasms in his lower back. Wafer underwent MRI and X-ray tests at Memorial Hermann-Texas Medical Center yesterday afternoon which revealed a bulging disc as the cause for the spasms. He will be listed as day-to-day.

My Prediction: This game is important to me.  The Rockets have to find a way to win.  This is a game that should mean so much to these guys that even Ron Artest can't miss.  I need to see that fire.  Rockets win, it's just our time.  (Oh, and yes, I said our, I say we.  I pay for this team, I write about it, I love it, they always say they can't do it without us, so we are in it together)