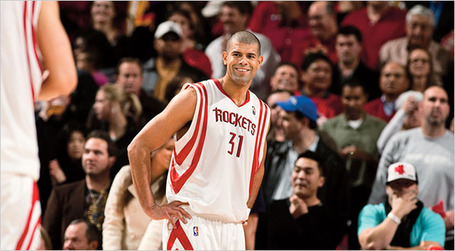 Shane Battier may be the "No-Stats All-Star."  He may be the unsung defensive hero, the man of a thousand intangibles, the NBA favorite to win Trivial Pursuit, and the classiest person you'll find on the basketball court.  But let's be honest for a second.

For the better part of this season, Battier, when healthy, has done his usual busywork.  He played excellent defense once his ankle healed, and he and Ron Artest have helped the Rockets become a lethal defensive team once again after some first half slacking.  But everything suddenly became about defense with Battier.  After a while, people, like myself, started wondering, "Hey, I haven't seen Shane hit one of those corner threes in a while."  Yet, I would remind myself of his true value to our team and move on.  It never occurred to me that his offense was becoming endangered.

If nothing else convinced me to forget about Battier's offense, then the Michael Lewis article certainly did.  For all of the praise that Lewis deserves for researching Battier and providing excellent analysis of all of the things that he does outside the box score, he gets a few bonus points in my book for deleting any memories that Rockets fans had of Shane on the offensive end of the court.  In describing all of the numerous ways that Shane Battier could affect a basketball game, Lewis effectively made him one-dimensional.

When glancing at Battier's career stats, it baffled me how steep a drop his shooting and scoring numbers took over the majority of this season.  Over the course of his career, Shane had been averaging about ten points per game on about 45% shooting.  Over the last four season, he had been taking eight shots per game.  But this season, or at least up until last week, the numbers were at 41% and 5.7.  Not only was Shane not making his shots as frequently, but he wasn't even taking them.  And when he did, he would try to force them up until he either made one or missed so many that he stopped shooting at all.  It was ugly.  But recently, Shane has had an awakening.

Against Utah: 18 points with four 3 pointers.

Against LAC: 15 points with two 3 pointers.

Against Phoenix: 18 points with four 3 pointers.

Against LAL: 14 points with four 3 pointers.

If you were to show me those numbers two or three years ago, I wouldn't be surprised at all.  But this season, it has been his best week to date.  According to Rockets broadcaster Matt Bullard, who frequently shoots with the Rockets during warm-ups, Battier has been working furiously to fine-tune his three point shot.  And on top of that, he has been much more aggressive.  He dunked (gasp!) against LA, and has brought back his trademark hook shot in the lane when he gets matched up on smaller guards.  I think it's fair to say that this work ethic of his is starting to pay off.

Shane, it's good to have you back on offense.  Keep it up.