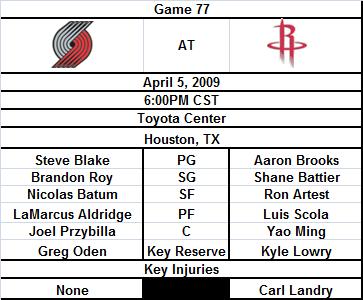 I do not even know what to say about this quote.  I know that I like Yao saying it because when he gets in jabs like this, the team typically responds.  Here's hoping tonight the team does just that:

"I would say every game we probably have 15 or 20 possessions that the play is ran to the wrong place, or when all five guys know the play there is only about 12 seconds left (on the shot clock)," said Houston center Yao Ming said, who scored 16 points while attempting just 12 shots. "That's our biggest problem right now. It (happens) too many times."

Point Guard
Brooks - You will not convince me that the Rockets would not have made the Lakers game closer if Kyle Lowry had closed the game out.  Brooks has to step his game up and he's just not doing it.  Maybe playing his home area team will help him focus better and keep his head in the game.  I am absolutely sick of turnovers happening because his guy beat him and then he didn't keep his head in the game and come get the ball from Yao, Scola or Artest causing them to throw a long, inevitably stolen, pass.
vs.
Blake - Good, solid, and still a guy I'd take on my team 100 times out of 100.  Even if you have CP3 you'd take him as your back up and gladly pay him his 4 million, he just is that good at controlling the team.  I can't say enough good things about him, he just gets the job done.  Kind of like some Rockets fans thought of Rafer Alston, but he actually DOES get it done.
Edge: Trailblazers

Shooting Guard
Battier - Continuing his hot streak is of the uptmost importance for a Rockets win tonight.  He will have his hands full with Brandon Roy on the defensive end, but he has to hit the open three when Roy rotates off to try and frustrate Yao.  It's as simple as that.
vs.
Roy - Quite possibly my 3rd favorite non-Rocket in the league.  It still pains me that the Rockets were not able to get him in the draft.  It would have meant no Shane Battier however, and while I love Shane, you'd be crazy not to take Brandon Roy over him.
Edge: Trailblazers

Small Forward
Artest - He effectively did what I asked of him, minus 3 or 4 possessions.  However, I can't help but believe that Yao's quote is directly pointed at him.  He doesn't flow the ball well and it is extremely frustrating at times.  He's leaving points on the board everytime he doesn't rotate over to throw the entry pass into him, either because Yao doesn't score or because Yao doesn't kick the ball out to him to hit a wide open three.  Seriously, how is this not a set play 50 times a game?
vs.
Batum - I wasn't impressed before the draft with him and the Rockets got more than I could have imagined by trading him to start off Daryl Morey's move to get Artest.  He's a better player than I gave him credit for, but is still a long way away in my opinion.  I don't think he's starting because he's that good, I think he's starting because the Trailblazers like Outlaw off the bench and they don't have any other small forward options.  He's a solid shooter and is clearly athletic though, let's hope the Rockets don't just leave him wide open like last game.
Edge: Rockets

Power Forward
Scola - Chuck Hayes is going to play a decent amount tonight and that won't be a knock on Luis.  Unless Scola is scoring stride for stride with Aldridge they are simply going to need Hayes' defense at times.  Luis will still play 30ish minutes and I think it will be in those minutes that the game is decided as the Rockets need him to step his offense game up like he did in Los Angeles.  10 shots a night should be his minimum and 3-5 of those should be of the driving to the hoop/post up drive variety.
vs.
Aldridge - LaMarcus Aldridge is living up to his second player drafted billing.  He's always been good, but as of late he has lifted his game leaps and bounds.  The Rockets have one great defender in Chuck Hayes that they will throw at him and one frustrating to play against defender in Luis Scola.  I don't see him going for 30 tonight unless it is at the detriment of his team.
Edge: Trailblazers -

Center
Yao - If Yao Ming is shooting 50% from the field, under no circumstances should he shoot less than 18 times in a game, none.  He wasn't being swarmed in LA, the Rockets simply were not getting him the ball.  The quote above really scares me too.
vs.
Przybilla - Good rebounder and team player, but when are teams going to stop taking flyers on guys like him in the first round?  For some reason just being 7 feet tall is magical to NBA teams.  Though, looking back at that draft and player production, he might have been drafted 2 picks too late.  The 2000 NBA draft was horrible.  Anyway, to the game tonight, he plays Yao tough, mostly because he's willing to hack at him until the refs call it, and then after they call it too.  He will play hard all night, and that's what they need to slow Yao Ming.  I'm still dumbfounded that he only had 3 fouls the last time out versus the Rockets.
Edge: Rockets

Injuries/Suspensions
Houston Rockets
OUT - Carl Landry
Portland Trailblazers
OUT -None

My Prediction: The Rockets pull this one out midway through the fourth quarter.  The Trailblazers have played fantastically as of late, but they are a poor road team and this is their first huge road game test to end the season.