A Quick Note on the Yao vs. Howard Debate

Share All sharing options for: A Quick Note on the Yao vs. Howard Debate 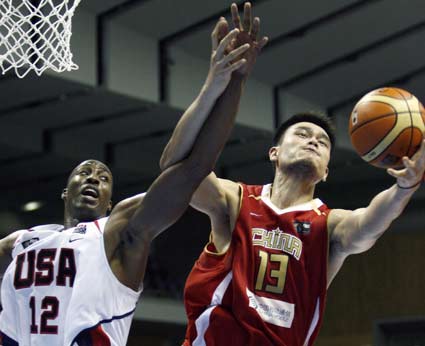 Dwight Howard is better than Yao Ming?  You can't be serious...

I've read countless arguments that crown Howard as the king of all centers.  There's definitely a case for Howard.  Problem is, his case is nowhere near as convincing as Yao's.  This is why I think Yao is better:

I'll get this out of the way, because for some reason, not many people are aware of Yao's domination of Dwight over the years.  Take a look for yourself at the head-to-head statistics, courtesy of Basketball-Reference.

If you can't read that, then click here to see an enlarged version plus the complete list of game logs for their head to head match ups.  Like I said, it's not even close.  Even better, the Rockets are 6-2 against the Magic in the 8 games that Yao has faced Dwight.  Just in case you want to get into a "which team is better" debate...

Here is my somewhat biased player analysis, as I have not seen Dwight Howard play as much as Yao.  That said, I believe what I have written down is a generally accurate portrayal of Dwight, and though it is jumbled and rushed, it should make sense:

While I can see why many people look at Dwight's dominating dunks, powerful blocked shots, his general athleticism, and his basic numbers as criterion for why he is a better center, I think that there is plenty more to it.  Based off this view, Yao is the better center.

Ask me again in five years, and I won't hesitate when I say that it's Dwight Howard.  But as for the here and now?  Yao Ming.