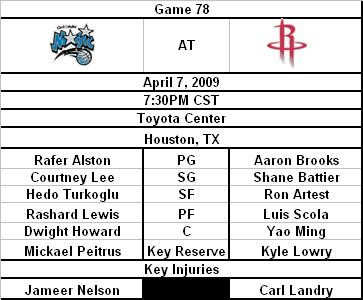 Before the season I said the Rockets would be playing the Magic in the Finals.  I'd love that to come true still, though it's a little longer shot on the Rockets end right now.  Consider this game the preview to Lee's Mythical Championship.

Point Guard
Brooks - He and Kyle Lowry are better than Rafer Alston, that's all that really matters.  The End.
vs.
Alston - He's actually shooting 40% from the field as a "Magic" (Side Note:  That's just weird to type), a full 3.5% better than as a Rocket.  That said, his three point shooting has gone from horrendous (34.8%) to unfathomable (28.6%), though he has at least somewhat gotten the hint and dropped his attempts by 1.  His free throw shooting has dropped from 78.9% to 67.9% as well.  Seriously, I love you Orlando Magic, I love you so much for taking him out of my hands.  I don't have any hair left, so I was down to pulling my scalp off
Edge: Rockets - That's right, Rockets

Shooting Guard
Battier - For the first time this year I sound like a broken record in a positive way with Battier.  He's playing his
vs.
Lee - This is the guy that I wanted in the draft, I just think he's going to be, and is already showing it, a great NBA player.  Plus, I could have had a jersey with my name on it and only been sort of lame, and not completely.  He has star potential and his shooting this year is off the charts.  41.8% from the three point line? Are you kidding me?  Note to Battier, do not leave him behind.
Edge: Rockets - Lee is good, and is getting better, but he's still a work in progress, I highly doubt he gets open looks tonight and then means Shane will have done his job (defending) better than Lee did his job (shooting)

Small Forward
Artest - He is extremely effective on quick drives to the basket, which makes it all the more mind boggling that he chooses to dribble for 10 seconds before he does it.  There is only one player in the league, Lebron, strong enough to stop him if he wants.  Now, time to choose them properly.  Let Yao get posted up on one side and as soon as the ball goes to you on the other, drive, don't hesitate, just take it to the basket and let Yao clean up.  Every other possession should have you tossing the ball to Yao while you set your feet from the three point line.  TIA
vs.
Turkoglu - He's had a scoring and shooting drop off this year, but otherwise is basically the same player.  Good player that is really pretty fun to watch unless he's on a shooting spree and torching your team.  This season those sprees have come at a lesser pace, but still have arrived.  Looking at his box scores, he plays better against up tempo teams, which is very good news for the Rockets.
Edge: Even

Power Forward
Scola - Thank you Luis Scola, thank you for coming back,  we all missed you for a few games there.   Two straight strong games from the Argentinean slayer were just what the Rockets need to see coming down the stretch.  Since Lewis can in no way guard him, I fully expect a similar game tonight.  Maybe not 80% from the field, but I would gladly take 60% and 12 rebounds.  Let's keep it going Mr. Scola, I think the playoffs are going to hinge on just how effective you are at scoring within the offense.
vs.
Lewis - 16 million a year, it still boggles my mind.  At the time the Rockets were trying to get him to take the MLE, which is less than he's worth, but much closer to the real value than the franchise player money he is making.  He is a very good scorer, though not elite.  I guess the money thing just gets in the way too much for me.  He really is a good player and if the Magic were paying him 10-11 million a year I'd say that would be about right, but you will not convince me that he should be getting 2.5 times what Turkoglu makes when they are basically the same type of player.  Let's not end it on such a down note, I don't want it to sound like I don't like Lewis, I really do.  He represents Houston well and I'm still angry that the Rockets didn't draft him.  He would have been the SF this team needed for a lot of years.
Edge: Magic - If salary counted this edge would go to the Rockets, plus, Lewis is not a power forward no matter how tall he is, it's still very close, but I'm giving it to the Magic based on stats alone.

Center
Yao - Yao:Okur::Howard: Yao, In fact, it's not even as close as that, as Yao still gets his points versus Okur.  I know one of these days Yao is going to have to pass the torch, and Howard will pass him in all likelihood in the all time centers debate, but that day has not happened yet and I don't think it will for another 2 years.  Mark Jackson saying that the only thing Yao does better than Howard is "his post up game" is beyond laughable.
vs.
Howard - There is one player in the league, Chris Paul, that is more fun to watch play than Dwight Howard.  He tries hard every night and just really gets what being an NBA player and a hard worker is all about.  His jumping ability at his height is phenomenal and his drive to win on the court is a thing of beauty.  One of these days, and again, I'm guessing 2 years from now, he's going to finally put the pieces together on a 15 foot jump shot and a true back to the basket spin towards and spin away, and he'll be in the conversation of top 10 centers of all time.
Edge: Rockets - You have to beat the best to be the best.  I get it, Dwight Howard is awesome, he's young, he's fun to watch.  I don't enjoy watching many players more than him, but when the head to head changes, we'll talk.

Injuries/Suspensions
Houston Rockets
OUT - Carl Landry, still out and I have not seen any news on when he will return.
Orlando Magic
OUT - Jameer Nelson, out for the season.

My Prediction: Aaron Brooks and Kyle Lowry take this game personally, so does Rafer Alston.  When Rafer takes it personally he shoots 4-16 and tosses the ball away 4-6 times, so Rockets win.