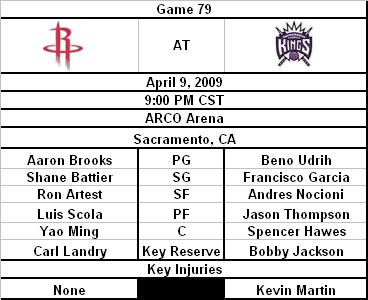 Point Guard
Brooks - I have almost run out of things to say about ABZ, so luckily the playoffs are almost upon us so I can dive more into the match-up.  For this game he should have a favorable one, though one that he's not necassarily favored for or against.  The jury is still out for me whether he can do this full time, though for now I'm still very much in favor of Lowry being the starter, more because "it would help them both and match their skills" more than "Lowry has played better" because that is debatable.
vs.
Udrih - Everybody talks about his contract, but come on, the guy makes a third of the max, he's not exactly breaking the bank.  He's a decent shooter though he has taken a step backwards this year from behind the arc.  He's at 2 to 1 on the assist to turnover ratio and he has no one at all to pass to when Kevin Martin is hurt.  I'm not saying he's a good player, he's merely middle of the road, but his contract is not what is hurting the Kings right now.
Edge: Even

Shooting Guard
Battier - He took a bit of a step back in the scoring department against Portland and Orlando.  In the Portland game he had to force up a few poor looks and in the Orlando game the offensive flow just didn't get him the ball much.  He still was 4-9 from the 3 point line and that's really all I ever want to see Shane shoot.  I do not like it when he posts guys up, he doesn't seem to get a high percentage shot very often when he does.  His defense has still be phenomenal making Brandon Roy take 20 shots and completely shutting down Courtney Lee and making him a non-factor hitting only 2-9 from the field.  He was also getting Rashard Lewis to rush his three point attempts repeatedly.
vs.
Garcia - Decent player but shold be a bench guy in the NBA and is instead the third best player of the starters right now for Sacramento.  He's having a very good shooting year.  Other than that I'd be lying to say I have much more insight into him.  The Kings have been horrible this year, watching other teams play them tells you nothing about those teams so I haven't seen a lot of Sacramento games.  Against the Rockets in two games he was decent in one and bad in the other.
Edge: Rockets

Small Forward
Artest - Ron Artest's return to Sacramento happens tonight for the first time in a Houston Rockets uniform (and hopefully not the last).  As much as players say they don't care about this kind of stuff, that is ridiculous.  He cares, possibly a lot since this is Crazy Pills we are talking about.  His first time playing at Indiana he shot 22 times (making only 6) in a season that he average 15 shots a game.  I'm thinking he shoots 32 times tonight.
vs.
Nocioni - I've always liked him, but I think it's the common perception that once he signed his big contract he got complacent.  He's been playing much better, by the numbers, since he arrived in Sacramento, getting closer to the numbers that Chicago paid him to have.  However, they also thought he was getting better than that and that they were paying for the future.  Still,Noccioni is a solid player that, when he plays with hustle, can be a tough match-up.
Edge: Rockets

Power Forward
Scola - Night in and night out, Scola does the dirty work.  He provides what the team needs when it needs it.  I can't count the number of times he's come up with a clock extending offensive rebound out of nowhere.  He's my favorite player not named Yao Ming on the Rockets and I still cannot believe Daryl Morey stole him for cap relief and VSpan.  Shades of Larry Anderson for Jeff Bagwell.
vs.
Thompson - He's young, he's raw and definitely needs to put on some weight, but so much for the reach opinion that most had when Sacramento made him the 12th pick in the 2008 NBA draft.  He's contributing to the team, and from what I can gather, Kings fans really like him.  David Thorpe of ESPN recently named him to the All-Rookie Third Team.  He's had some huge games and some small games, but the huge games clearly show the potential that he has.
Edge: Rockets

Center
Yao - Yao needs to average 28 points and 11 rebounds to offically be 20/10 on the season.  I don't see him getting to the 20 points, though most would still round up regardless, but the 10 rebounds a game should be right in his wheelhouse.
vs.
Hawes - Really Sacramento, you are making me write about Spencer Hawes?  Really?  In all truth, he's been better than I thought he would be.  Basically slightly besting what Chris Mihm was at this point in his career.  Still, he's a 7 foot white guy, expectations were low.  It saddens me every day that I wasn't 9 inches taller, I could be a millionaire!
Edge: Rockets

Injuries/Suspensions
Houston Rockets
OUT - None
Sacramento Kings
OUT - Kevin Martin

Check out Sactown Royalty, one of the Kings (if you will) of sports blogs

Tom Ziller recently did a post about Kevin Martin and what a statistical anomaly he is.