For McGrady, Houston's playoff success will be understandably bittersweet

Share All sharing options for: For McGrady, Houston's playoff success will be understandably bittersweet 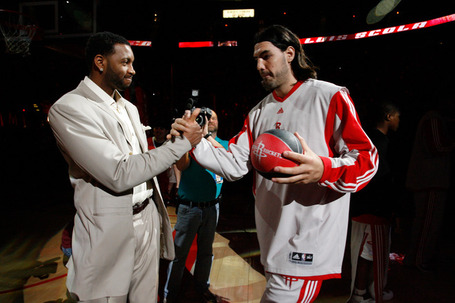 You knew that one of us was going to go there at some point.  It was only a matter of time.  The Rockets were able to break a long run of first round exits last night.  But Tracy McGrady's streak lives on.

It's got to be a strange feeling for McGrady, who has taken a boatload of criticism this season, either for his lackluster performance, or for his radio commentary.  He's got to be telling himself that the Rockets could have done it with him on the floor, that his absence couldn't have been a positive thing.  But the signs don't point in his favor.

As the season has progressed, the team has further distanced itself from McGrady.  When T-Mac finally departed for good during the All-Star break, the media began digging the Rockets' grave.  They doubted them so much as to not even mention them at times with other teams in playoff contention.  Without McGrady, the collective belief was that the Rockets may not even make the playoffs, much less advance.

But the Rockets prevailed in the end, making the playoffs as a fifth seed, though they could have finished as high as second in the West.  Suddenly, the talk became about the Rockets using McGrady's absence as motivation, that they were out to prove to the world that they could win despite not having their presumed best player.  There was plenty of talk surrounding Houston basketball, and yet, none of it came from McGrady himself.  And when Tracy ever opened his mouth, it wasn't exactly in overwhelming support of our chances.  Hell, he even picked the Lakers to win the NBA championship.  Talk about believing in your team.

Sometimes, you have to wonder if Tracy McGrady ever wanted this team to win without him.

It's not an outrageous question to ask.  Sure, if someone ever popped the idea to Tracy, he would certainly wave it off and declare his devotion to the franchise.  But official statements aside, does Tracy want this team to advance?  After all, if they are to be successful in the playoffs, it will be without him, and therefore will be somewhat detrimental to his star image.

It is safe to say that T-Mac has an ego, and it is just as safe to say that the Rockets playoff situation will make him look a lot worse publicly.  That's going to be hard for him to take.  Even if the Rockets don't beat the Lakers, people are going to remember that they won in the first round without him in uniform.  The assumption, fair or unfair, will be that there was a  common denominator in each playoff series over the last few seasons, and it was Tracy.  Take him out of the equation, and you've got yourself a playoff series victory.  It's a tough criticism to accept, true or untrue.

Had the Rockets not advanced, Tracy's image wouldn't be scratched whatsoever.  He might take criticism for having a subpar season, but his legacy wouldn't be near as affected.  The consensus would be something along the lines of, "Well, now we know that it wasn't Tracy's fault that the Rockets couldn't advance, seeing as they couldn't do it anyway.  Maybe it really was the team's fault."  Tracy's reputation would come out of this postseason unscathed.  He wouldn't be respected any more, but at least he wouldn't be respected any less.

But forget the image part for a second.  Think of how this affects Tracy mentally.  He now has to wake up every morning, look in the mirror, and tell himself, "They did it without you."  It doesn't even matter if it was because of his absence or not - just the mere fact they won would be painful enough to swallow.  All of the hard work that T-Mac put in for the team would seem meaningless.  All of the promises that he made to the team and to the city would be fulfilled without him.  And all of the accomplishments that he envisioned himself making with the Rockets would be accomplished without him.

Sometimes, you have to wonder, for Tracy's sake, if he ever wanted this team to win without him.  It wouldn't be so much a selfish wish as it would be a mental stabilizer.  He would like for the franchise to do well, but what does it all mean if he wasn't a part of it?  That's got to be the most devastating part of this whole ordeal.  Anyone questioning McGrady's injury or work ethic or dedication must be joking.  If you need any more proof that Tracy wishes like hell that he could be on the court, watch him during the games.  Even if you can't see his facial expressions, just look at his demeanor.  He is being supportive by even showing up, and yet, he looks constantly depressed.  This goes far beyond just wanting to play basketball - it is a mental battle that Tracy won't win.

Sooner or later, he is going to have to accept that, as far as this season goes, in all of the ways that he failed, his team succeeded.  For all the work that he put in to help this franchise win, there was no personal reward.  It will truly test his character above all else - were his goals team goals, or were they merely for his benefit?.  How Tracy responds to the reality of the situation will define what kind of person and player that he is in the years to come.  It certainly won't be easy.