Share All sharing options for: Ten things we can expect from the Houston Rockets in Game 5

To continue the "top ten lists" theme throughout the playoffs (and I hope the playoffs last at least six more games for the Rockets)...

Here are ten things you can expect to see from the Rockets in tomorrow's very, very pivotal Game 5 against the Lakers:

1.  Aaron Brooks will not score 34 points again.  His previous career high was 30 (thanks to Steve Nash), so it would be highly unfair of us to expect our favorite midget to have a similar encore performance.  He will still have a major impact on the game (good or bad), but I do not expect the Lakers to allow ABZ to put up 34 on them.  This, of course, could be to the Lakers detriment if they go out of their way to prevent ABZ streaking to the middle.  Hint, hint... you guys had better continue making open shots! 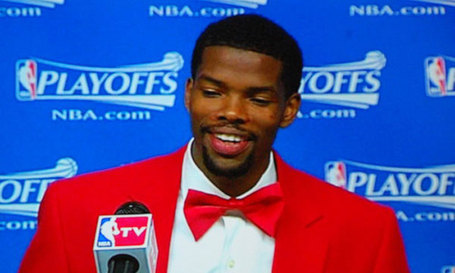 (though if the Rockets win Game 5, ABZ better break out that sweet ventriloquist's outfit again.  The bow-tie was an especially nice touch!  Thanks to Skeets at BDL for the image)

2.  Coach Sleepy might actually call a play.  Okay, this is just playing on the law of averages.  At some point he has to call an actual play out of a timeout.  Right?

3.  Von Wafer will play more than 7 minutes.  I fully believe that Adelman was continuing to punish our mohawked friend for his Game 2 attitude by not letting Von participate in Sunday's epic blowout.  I also know that the Baron would have wholly ignored Adelman's desire to run the "prevent offense" as displayed in the fourth quarter Sunday.  Von knows one speed and one direciton.  Holding the ball and looking at the clock ain't one of those gears.

4.  Ron Artest will make an open jumpshot.  Maybe even two!  I know, it's hard to believe given his 4-19 performance.  I aso know that Ron will need to pick up the slack left after ABZ returns back to his normal output level.  Here's me showing faith in Crazy Pills' ability.  We all know he can do it.  And, usually, he's a deadeye shooter when his feet are set.  Sunday just wasn't his day.

5.  Someone will pick up a technical foul.  I don't even think it will be Artest.  It will probably be Adelman or Von... but I'd pay good money to see Shane get T'd up just to prove a point, if necessary!  Wouldn't you?  "When Choir Boys Get Mad!"

6.  Luis Scola will stop playing tentatively.  For as awesome as Scola played in the series against the Blazers, he's been equally forgettable against the Lakers.  Yes, I know Scola had a career post-season high of 14 rebounds in Game 4.  I also know that he continued to pass up open 17 foot shots to either dribble or pass the ball one extra time.  This usually ended up being a turnover.  This has to stop Scola has to take that open shot every time he's open.  He also has to make more than 1/2 of his free throws.  (You ruined our perfect game at the charity stripe, Luis!  Please don't do that again!)

7. If the Rockets win... Phil Jackson will drop another F bomb on live TV.  Maybe that's just wishful thinking on my part though!

8.  Lakers fans will not show up for the game until midway through the 1st quarter.  They will also leave at least 10 minutes before the game actually ends (win or lose).  Yes, Houston fans have this bad habit, too - but Game 5 isn't in Houston now, is it?

9.  Carl Landry will make more than one shot.  Yes, the one shot he made in Game 4 was out-freakin'-standing and made everyone get out of their seats.  In Game 5, he's going to need to be a bit more assertive.  If only because I haven't been able to drop a "Luis Landry to the rescue" line all post-season.  Though, in a more tangible bit of reasoning, Landry will probably get a lot of playing time because I foresee Chuck Hayes being in early foul trouble (hey, you didn't think I'd get through a whole post without an indirect complaint about the referees, did you?)

In actuality, I have no idea what to really expect in Game 5.  The Rockets could come out flat thinking they proved their point in Game 4.  The good guys could also surprise L.A. once again by going on a 9-2 run to start the game.  What the statistics have shown us so far in the 2009 playoffs is that the Rockets win the game if they win the first quarter.  They also lose the game if they lose the first quarter.  We're talking 100% each way.  If that trend holds, the Rockets better score 20+ right out of the gate.  And hopefully hold the Lakers under 20 again.

Put the fear of God into Kobe and his minions.  See how they react.