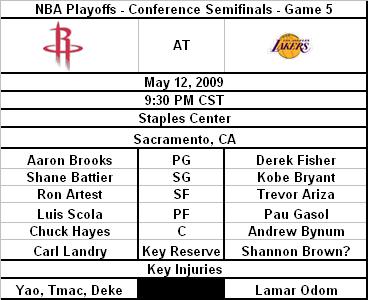 In the spirit of the troll thread, let's have a little fun.  No one thinks the Rockets will win this game.  Not even Rockets fans that say they think they'll win really BELIEVE it will happen, not deep down.  Can the Rockets win?  Of course, this Lakers team, other than Kobe Bryant and Pau Gasol, is not mentally tough.  So, in that spirit, let's do this from a Lakers troll fan standpoint. (Also, everything I've seen says Odom is likely out tonight)

Point Guard
Brooks/Lowry vs. Fisher/Brown/Farmar -  Aaron Brooks?  Come on now, the Lakers gave him Game 4.  They are a respectful and thoughtful team and knew the Rockets needed that win to keep up this moral victory of a season.  The Lakers are professionals and know that good karma will help them.  Derek Fisher is a fantastic defender, and a champion.  Do you really think Aaron Freaking Brooks could beat him?  EVER?  Of course not.  The Lakers are going to win this spot so badly that Phil J might even start Shannon Brown just to be fair to the Rockets.
Edge:  Lakers

Shooting Guard
Battier/Wafer/Artest vs. Bryant/Vujacic - Shane Battier, you have been warned.  Kobe's not going to take your dirty tactics anymore!  You've hit him in the face 11 times now with that stupid face guarding ploy.  Kobe is a fast healer though and you can't tell.  Your jersey pulling, flopping antics will not stand!  Kobe might go off for 87.  Even in Game 4 you can tell that Kobe just shut it down.  He wasn't wasting anytime finding Battier when he was shooting.  Rest assured that Kobe will be playing 36 straight minutes tonight on both ends of the floor until the dirty Dukie is shamed.  Clearly Shane can't guard him, even Kobe has said so himself.  I don't know why he got that technical in Game 2, it's not like he wasn't be truthful.  Did you see what Battier said?

"We have a free mentality," said Battier, who outplayed Bryant in Sunday's wipeout. "Every shot that everyone takes is a free shot. If it goes in, great. If not, we tried. We have nothing to lose. No one expected much out of us. We expect an effort out of us, but we're going to take our shots, play hard and take our chances."

Small Forward
Artest/Battier vs. Ariza/Powell - Artest is just a thug.  And I know thugs, I grew up in East St Louis and live in Mississippi now and my parents are from New Orleans.  Like I said, I know thugs.  He's not even a good player.  I could score if I launched 30 shots a game too.  The guy can't even dribble, it's pathetic.  Though, I have to say, I wouldn't say that to his face, he's cut guys for less.  Trevor Ariza is too athletic with too high of a ceiling for this to go the Rockets way.  Ariza shot 50% in Game 4, just showing that Artest doesn't care about defense anymore.
Edge:  Lakers

Power Forward
Scola/Landry/Cook vs. Gasol/Odom?/Powell - With Odom likely out, mostly because my boys don't need him, The Spanish Inquisitor is going to dominate that other European guy.  All Landry can do is dunk and get garbage rebounds, Powell can do that too, the Lakers just don't need it.  Scola is a greasy punk, I guess he's a decent shooter, but come on, the Lakers aren't scared of him, they are leaving him wide open DARING him to shoot it.
Edge: Lakers

Center
Hayes/Scola vs. Bynum/Gasol/Mbegna - No Yao means it's Bynum time!  Seriously, the guy is hurt, but he still goes out there like a champion and warrior.  If he's not in the Hall of Fame at the end of his career (unlike Yao Ming I might add) I'll let you have my apartment above the garage.  I'll keep paying the rent for you.  Basically, it's not happening.  Chuck Hayes had a nice game, but come on, we're going to foul him so often that people are going to the hospital for laughing so hard at his free throw shooting.
Edge: Lakers

Prediction: LAKERS 136 - rockets 73, no reason to double the Rockets up, the Lakers have more class than that