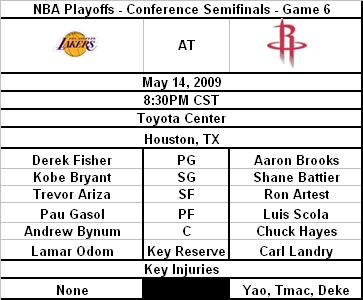 Point Guard
Brooks/Lowry vs. Fisher/Brown/Farmar -  Up,down,up,down, so is the life of a group of young point guards.  Brooks and Lowry have looked unstoppable at times in these playoffs, and at other times they've made it look like Rafer Alston is a better choice (say it ain't so!).  Currently, with no Yao or Tracy, the Rockets need offense.  Without that offense coming from the point guard slot all is lost.  Both players match up well with LA, however it's been their decision making that has made the biggest difference (other than LA just having more firepower) in the losses this series.  When they make good, solid decisions, the Rocket have a great chance to win.  Whether that be coming to the ball instead of letting a teammate throw an errant pass, or not letting Ron Artest run the offense, or having the confidence that their shot is going to fall, or driving to the basket, those are the decisions that help them win, lose or get blown out.  Fisher/Brown/Farmar are just not an impressive bunch.  Yes, there is some talent in the latter two, and a veteran presence in the former, but they cannot beat Brooks and Lowry if the two of them decide not to be beaten.
Edge:  Rockets - It's on these two guys' shoulders

Shooting Guard
Battier/Wafer/Artest vs. Bryant/Vujacic - Kobe Bryant IS that good.  He's that good of an offensive and defensive player.  Right now I think he's the 5th to 8th best player of all time.  I'm not exaggerating and it's really funny to me that since people don't like him personally they denigrate his greatness.  The guy is basically perfect as a basketball player.  He is the closest thing to a replacement for Michael Jordan that has ever played in the NBA.  Bryant is also possibly the only guy in the league that works harder at his game and physical ability than Yao Ming, and that's really saying something.  He's the reason Lebron James went supernova this year as well.  James watched his work ethic during the team USA run to the gold and has emulated him ever since.  With all that said, as much as Kobe haters delude themselves about how great he is, Kobe/Laker lovers delude themselves about how much of an impact Shane Battier has on him.  Yes, Kobe still gets his points; he may even shoot a high percentage.  That's all well and good, but here's what you aren't noticing; Shane makes him work harder than any player in the league can even dream of, much less actually do.  And what made Game 4 a blowout wasn't only Brooks and Battier scoring, it was Chuck Hayes coming over for help defense on an already flustered Bryant.  And yes, Kobe has been flustered, he has no other reason to try and taunt Battier.  Save your argument, smarter basketball minds than you and I agree with me.  It's just the way it is.  You should thank Shane; it means that if the Lakers get by the Rockets, Kobe will be that much better as the offense comes to him so much easier.
Edge: Lakers - Come on, it's Kobe Bryant for goodness sake

Small Forward
Artest/Battier vs. Ariza/Powell - Ron, Ron, Ron, or should I say Ron-Ron?  This is your battle to win man.  You have the ability, you have the basketball intelligence, it's just odd how you turn that part of your game on and off.  This playoff run has been mostly due to you, your shot selection and focus has been off the charts.  That is, until Game 5.  I know, the game was out of hand and you tried to do too much, I'm cool with it.  Now it's time to rein it back in and try to get this to a Game 7, where, yes, anything can happen.  Trevor Ariza, or Lamar Odom at the 3, or even Josh Powell don't matter.  You can take all of them.  You can post all of them but Odom up.  Let's give it a shot.  Less three pointers, more driving the lane and more dishing the ball.  Your passing is underrated and people are finally starting to see how good you are at it.  Let's show them a little more?  Okay big guy?
Edge:  Rockets

Power Forward
Scola/Landry/Cook vs. Gasol/Odom/Powell - Luis Scola has been a bit MIA this series.  He's been hesitant with his shot, something we didn't see in the first round and his defense has dropped off.  This needs to be a game where he goes off, 7-10 or so with some spin moves that get Gasol into foul trouble.  Get Gasol to the bench early and the Rockets could build a lead.  And speaking of Gasol, I would like to openly admit that this series has made me come around on him.  I still don't particularly "like him" but I have a healthy amount of respect for him that wasn't there before.  He's the only guy other than Bryant that has come to play night in and night out.  His motor is silent, but deadly.  If Odom plays a lot at the 4, then I expect to see big minutes from Landry.  He'll slide to defending the Lakers SF and Artest will guard Odom.  That lineup is very much in the Rockets favor.
Edge: Lakers

Center
Hayes/Scola vs. Bynum/Gasol/Mbegna -  Bynum has been predictably decent with no true center, or Chuck Hayes on the court.  He hasn't blown me away, but to be fair to the guy, he's playing on 75% of a knee.  But this matchup comes down to this: Can Chuck Hayes stay out of foul trouble?  If he can, this game will be within the Rockets reach late.  If he can't, it could be another huge loss.  Hayes' defense on Gasol, Odom and Bryant has been nothing short of phenomenal, when he's able to stay on the court.  In LA he was taken out by the refs (I won't argue this) and he needs to know in Game 6 what he can and can't get away with.  You know what would be the perfect ending to this game?  Chuck Hayes sinking the game winning free throws.
Edge: Lakers - But Chuck can sway it his way

Prediction: Rockets win, potentially on a last second shot to send shivers of doubt through LA.  Or maybe it will be false confidence, I'd actually rather that.