Share All sharing options for: Game 6 Recap: The Return of Luis Landry

Anyone else think the Rockets can't win without Yao Ming?  How much longer can we talk about "stunning wins" before we all stop and realize that this scrappy bunch is one helluva basketball team?  If you're still in doubt, that is, if you still believe that every Rockets win is merely an outlier, then turn on your TV and actually watch them play.  Tonight would have been a good place to start, as the Rockets, led by their shallow frontcourt, defeated the Lakers 95-80 to force a seventh game in Los Angeles.

We like our power forwards in Houston.  They're so popular that we've combined them into a single entity.  Problem is, Luis Scola and Carl Landry haven't done a whole lot together since the postseason began.  Before tonight, they were polar opposites.  If Scola played well, Landry didn't show up, and vice-versa.  It was time that the two finally put together a complete game.

Too much focus was placed upon Ron Artest's game five performance, when it should have been placed upon our horrible post play.  Rick Adelman made it clear to his team that we were going to score in the paint as often as possible.  That meant running the offense through a single post player.  With Yao Ming stuck on the bench, Scola stepped up and became our go-to player once the game began.  Every time down the court, the ball went to Luis Scola.  Not Ron Artest, not Shane Battier -- Luis Scola.  Not only did the Argentinian Slayer deliver; he nearly had a double-double by the second quarter.

Scola used everything in his arsenal.  He Dream Shook Lamar Odom.  He plowed through contact from Gasol to make a layup en route to a three point play.  He hit open jumpshots from the elbow, as well as from the baseline.  He even made a few nice passes, namely a short dish to Chuck Hayes for two.

We've always known Scola to be "solid."  He gets his 13 and 9 every night, and yet he constantly goes unnoticed because it is expected of him.  Luis is our rock; our game-in and game-out player.  He simply does what is asked of him: to hustle, rebound, and make open jumpers.  The Rockets asked him to do more tonight, and he responded.  You'd never expect a clumsy, undersized power forward to suddenly blow up for 24 and 12 in a playoff game against an opponent in Pau Gasol that had shut him down for the entire series.  But it happened, and in the most dire of circumstances.  I'll take it with a grain of salt, or a handful, or an entire bowl - whatever skepticism of a repeat performance this may come with, I'll most decidedly take it.

I've been bashing Luis all series long for being hesitant.  Through five games, he had become wary of shooting upon catching a pass, and looked generally nervous going up against a tall defender in Gasol on the block.  But tonight, Scola found his swag, or his mojo, or whatever you want to call it.  He.  Found.  It.  And he attacked the Laker front court with everything he had in him.  Adelman called a timeout in the first quarter during a big run just to give Luis a rest so he could stay in the game.  He deserved every bit of rest that a ten minute ESPN timeout could give him.

However, Scola eventualy cooled down and was forgotten on offense.  As the third quarter began, the Rockets became...(gulp)...stagnant!  We hadn't looked this inept of movement since JVG and T-Mac were running the show.  We were dribbling way too much, and it became clear that we were just throwing up prayers instead of running an offense.  The Lakers took the opportunity to make a big run, and cut our sixteen point lead down to three.  We needed a sparkplug, a wake-up call.  Anything to start us up again. 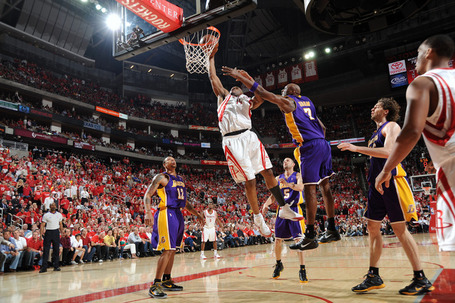 Immediately after coming into the game, Landry got the ball in the post and attacked the basket.  He jumped through two defenders, brought the ball down to his waist in mid-air, and then brought it back up again to complete a reverse layup despite being fouled.  The crowd, which included myself on this occasion, went nuts.  Landry hit the ensuing free throw, and soon after, our offense, ignited by the crowd, found its rhythm again.  We pushed our lead back up to eight by the time the fourth quarter began.  From there, Rick Adelman decided that Landry was the best option, and he stuck with him for the remainder of the game.  Good call, Rick.

Carl hit a jump shot to bring the lead to nine points.  However, about three minutes later, Pau Gasol hit his third shot in a row, and the crowd became uneasy.  Was this the time the Lakers would come back?  Was Pau Gasol going to take the game over?  We got our answer right away.  As an added bonus, it was in the form of a posterizing Landry dunk that nearly blew the roof off the Toyota Center.

From there, the Rockets continued to build their lead on a string of tough Aaron Brooks jumpers.  Then our defense went on lockdown and put an end to L.A.'s comeback attempt.  Punch the plane tickets; we're going back to California.

But from start to finish, and in the most impressive of Rocket runs, there was one constant: Luis Landry.  The duo finally brought it to the table and gave us the inside presence that we so desperately needed.  It was quite the triumphant return.

Aaron Brooks' performance was equally as impressive.  He was much more patient on offense, and while I still hate the fact that he dribbles ten seconds off the shot clock before passing, it sure beats a turnover.  He made a few lazy passes, and he got a little too aggressive at times, but as long as he is compensating for those turnovers by scoring the basketball and getting into the paint, his mistakes can be overlooked.  I would also like to point out that Aaron made Jordan Farmar look like a cripple on a pick and roll play.  Brooks came around the screen, crossed Farmar, and then blew right by him.  Farmar then waived the white flag and grabbed Brooks around the shoulders to foul him and prevent him from an easy layup attempt.  At least Farmar didn't fall over.  That would have been even funnier. 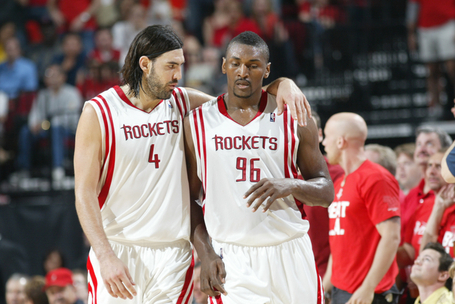 I'm going to skip over Ron Artest.  There is no point in breaking down his 6/17 shooting night, other than pointing out that I thought his shot selection was much improved from Game 5.  The shots just didn't fall.  I will credit Ron's defense, however, as it was tenacious and smart.  He didn't lose his head when he got matched up with Kobe this time around.

We saw another example of the Bryant Doctrine tonight, which states that "if a player makes physical contact with Kobe Bryant of any kind, Kobe has the right to retaliate violently."  His reaction to Ron's physicality was completely unnecessary.  If Ron fouled him, then he should have simply walked away upon hearing the whistle.  Instead, he had to escalate the situation and make contact with Ron's face, which just further makes Bryant look like an arrogant asshole.  It's the prime reason that I'm not going to watch Spike Lee's Kobe Doin' Work.  There won't be any mention of his reputation for being dirty on the court.  We will only see the ESPN highlights version of Bryant, as opposed to the entire picture.  But whatever - if he keeps getting T'd up, we get more free throws.  Hooray.

Bryant's game itself was visibly off, and he only got 32 points because of his nine free throws and 27 shot attempts.  Another great defensive game from Shane Battier.  And speaking of defense, it took the Lakers six minutes to make their first field goal.  We came out strong on the defensive end and never looked back, save the third quarter.

There was only one particular aspect of the Rockets' play that irked me, and it was the fact that Kyle Lowry got so much more playing time than Von Wafer.  I get it: Von was a jerk a few games ago, and he wasn't boxing out Sasha Vujacic tonight, but he shot the ball well in his limited minutes, and unlike Lowry, he is actually a threat at the three point line.  Each time the ball was moved to Lowry's side, he would be standing on the perimeter with no option but to drive.  And with Shannon Brown guarding him, it was tough for Lowry to create any separation for a layup attempt.  Adelman should have put Wafer in the game to give us another shooter, as, at that point in the game, our only other shooting threat on the floor was Shane Battier.  Luckily, Carl Landry came to the rescue.

One more note on Landry.  He's obviously struggling to stay with Pau Gasol defensively.  So why don't we double?  Why not send an extra man to help him out?  We did it a few times, and it worked for the most part.  Gasol is a gifted passer, so doubling may backfire once or twice if a Laker hits an open shot on a kick-out pass.  But if I were Coach Adelman, I would much rather force a jump shot from Trevor Ariza than have Gasol score at will over Landry.

Celebrate: only ten turnovers compared to nineteen assists!  It's a miracle!

So much for Andrew Bynum returning to prominence.  He didn't score a single point and drew three fouls in nineteen minutes of playing time.  Bynum was not the priority for the Lakers this time around.  He was forced to look for his own offense, and he found absolutely nothing.  Look for him to be a bigger focus of the Laker offense in Game Seven.

The Brian Cook Barometer was in full effect, as Cook did not play a single minute, thus indicating our great success.  It's always comforting to see Cook in his sweats for four quarters.

That's about it.  The Rockets played like a team that wasn't ready to see their season end just yet (I'm borrowing from Doug Collins, by the way).  They outhustled the Lakers, and like they did in Game 4, they fed off of the great crowd and executed their offense very well.  But now we leave home and go back to Los Angeles for Game Seven.  I have mixed emotions about our chances of winning. 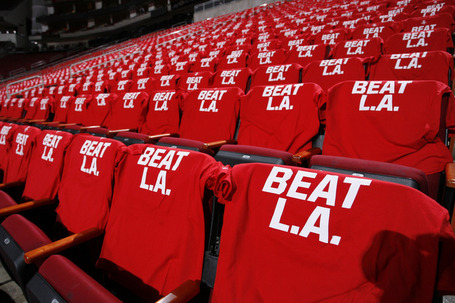 Can we win a game on the offensive?  Can we win without our backs against the wall?  The Rockets use the adversity directed towards them as motivation to win all the time.  But in this game, I think people will expect a much better performance from the Rockets than last time around.  And for anything to be expected of the Rockets is just asking for danger.  For once, the Rockets will have to put all of the emotion aside and win a basketball game straight up.  It seems like the emotional stuff doesn't carry all the way to California.

We need to come out swinging like we did tonight.  We need to set a defensive tone early.  Kobe is going to have a bounce-back game; we know that.  But we can control everyone else.  We're too talented not to be able to do so.  I really hope this wasn't our last game in Toyota Center.

It's time for one more miracle win.  And yes, a road win on Sunday would count as a miracle.