Share All sharing options for: A Rockets Game 7 pep talk from....... Yoda.

The Rockets feature a 6'5" starting center in Chuck Hayes.  The tallest remaining player on the team is Luis Scola, who is probably 6'9" but is not exactly a high jumper.  Furthermore, the Rockets apparently lack NBA-level athleticism; the only true athlete on the team being Von Wafer, who has been banished to the bench by Coach Sleepy.  Carl Landry is another good athlete, but he got shot in the leg and is not exactly 100%.  Meanwhile our best offensive player is a midget and the team leader is a "no stats" all-star of sorts.  When things get tough, the team takes its cues from a guy most famous for having a cup of beer poured on him in the middle of a game.  And the coach can usually be found napping on the sidelines...

In contrast, the Los Angeles Lakers have the best player in basketball in Kobe Bryant.  They have another All-Star in Pau Gasol.  They have a coach that has won 9 championship rings and once actually spoke to *the* Michael Jordan.  (And Jordan spoke back!)  The Lakers also feature a trio of tall front court players in Gasol, Lamar Odom and Andrew Bynum.  The Lakers are God's gift to basketball.  Or so I am told.  They are all athletic and young and theoretically better overall players than anyone according to ESPN some media outlets...

which is why few people, if any, are giving the Houston Rockets a chance to win Game 7 in Los Angeles this Sunday.

As a result, and because motivational speakers do not count against the salary cap, it has come to my attention that Les Alexander has gone "outside the box" in a way and hired someone to address the team before the big game.  I think he's a friend of Yao Ming's -- if only because they have similar patterns and tendencies when speaking the English language.  He is a wise man and a warrior (though wars do not make one great).  He has seen the Dark Side and defeated it.  If there's anyone who understands the task facing the Rockets on Sunday... it's this man.  He's even so awesome he goes by one name.  You know him simply as: 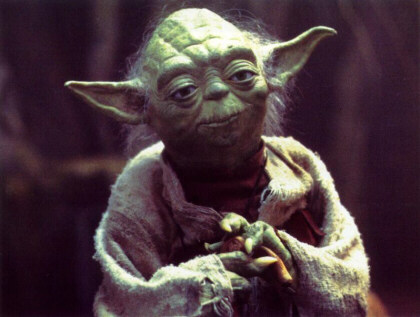 They say the Rockets are too small to beat the mighty Lakers without Yao, Deke and T-Mac.  Yoda sees a different way:

Size matters not. Look at me. Judge me by my size, do you? Hmm? Hmm. And well you should not. For my ally is the Force, and a powerful ally it is. Life creates it, makes it grow. Its energy surrounds us and binds us. Luminous beings are we, not this crude matter. You must feel the Force around you; here, between you, me, the tree, the rock, everywhere, yes.

(And when Yoda speaks of "the rock" I can only presume he's referring to the basketball.  Tricky with the slang, this one is.)

When they say the Rockets should fear and respect the Lakers... Yoda sees it differently:

Fear is the path to the dark side. Fear leads to anger. Anger leads to hate. Hate leads to suffering.

They've said that the Rockets stand no chance without the big two of Yao and Tracy and that it's okay if the Rockets eventually lose because they had a built-in excuse with all the injuries.  Yoda accepts not this rationale:

Death is a natural part of life. Rejoice for those around you who transform into the Force. Mourn them do not. Miss them do not. Attachment leads to jealousy. The shadow of greed, that is.

Meanwhile, the Rockets have young and sometimes inconsistent point guards.  Brooks and Lowry have been at times amazing... and at times infuriating. Yoda also has a message for these young padawan learners:

Control, control, you must learn control!

As for the fans and opponents who have doubted the Rockets and did not believe they are capable of winning?

That is why you fail.

So, go ahead and continue doubting the Rockets.  Keep believing the Lakers will just win because it's their presumed destiny.  That is why the Rockets continue to win.  They believe in something greater than themselves.  And this is why they will conquer Darth Vader Kobe and the Lakers in Game 7.  Yoda said so himself.