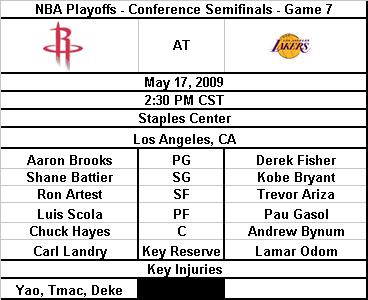 We've gone over the match-ups for 6 games.  Now, let's go over what the Rockets need to do to put themselves in a position to win.  I'm not saying every one of these things has to happen, but 3 out of 5 will keep the game close.

Point Guard
Brooks/Lowry vs. Fisher/Brown/Farmar -  To win this match-up Lowry and Brooks need to bring their magic to the road.  Brooks has to drive the lane and look for the open man, but not be afraid to finish.  You could say the exact same thing for Kyle Lowry, run, drive, score or pass.  One things for sure, this HAS to be one of the 3 spots the Rockets win.  A loss of an edge here will just about guarantee a blowout.  Even a close match-up will make a Rockets win iffy.  The good news is that even when they haven't played well, the Rockets have won the point guard battle.  If I could have three things they would be 1.  Smart passes 2.  Come to the ball at all times 3.  Drive the lane, repeatedly
Edge:  Rockets

Shooting Guard
Battier/Wafer/Artest vs. Bryant/Vujacic - Battier has held Kobe for 3 of the 6 games, and it has been the biggest key to Rockets victories.  That's not to say Kobe didn't score or shoot well, it's just that he worked about 30% harder to do so and it was at the expense of his teammates to some extent.  Will Kobe's teammates show up?  Hopefully not, but even if they don't, making Kobe into a one man scoring show can help the Rockets win, as long as he has to work extra hard and long for those shots.  Force him to the places he likes to shoot least and Chuck Hayes continue to defend the pick and roll well (just watch the fouls).  If Kobe shoots more than 25 times the Rockets will have a chance to win.  Von Wafer coming off the bench and adding a spark with the second unit could really come through as well.  This could be a break out of the doghouse type game.  If he goes for double digits, it's a very good sign for the Rockets.
Edge: Lakers

Small Forward
Artest/Battier vs. Ariza/Odom - Artest on Odom has been a defensive masterpiece, it needs to continue in Game 7.  If Lamar Odom goes for more than 16 the Rockets could find themselves on the wrong end of the war.  Keeping Odom from energy plays that he needs to stay focused is important and Ron Artest is exactly the guy that can do that.  No dunks for him or Ariza, that's a good recipe for a Rockets win.  Ron needs to take care of the ball as well.  No lazy passes, not even one and no crazy jumpers.  It's time for the Ron Artest of Game 6 against Portland to show up.  No one on LA can or has guarded him, it's been on his shoulders whethere a shot went down or not.  It's time to pump up that Ron Ron magic.
Edge:  Rockets

Power Forward
Scola/Landry/Cook vs. Gasol/Odom/Powell - Luis Landry had a night in Game 6, but Game 7 needs to be the game of their lives.  It's time to show the league that you can be a star Mr. Scola.  Come out with the passion and fire that makes you who you are.  Rebounding out of this group is absolutely key.  A line that I expect from the duo is somewhere in the neighborhood of 28 and 22, if it's close to that, the Rockets will have a shot.  Gasol will score, Odom will be guarded by Artest, and Powell hasn't contributed much.  It's just important to contain all of those guys on the offensive glass.  Box out and get good position and good things will happen.
Edge: Lakers

Center
Hayes/Scola vs. Bynum/Gasol/Mbegna -  This one is easy:  Stay out of foul trouble Chuck, it's just that simple.  Do what you always do, but stay away from the ticky tack calls.
Edge: Lakers