Share All sharing options for: Once again... this time with emphasis! (David Stern assigns Joey Crawford to ref Game 7)

David Stern really isn't even trying to be subtle anymore.  Nope.  Yeah, the one game where the Rockets/Lakers matchup almost ended up in a brawl... guess who the lead referee was?  That's right -- Joey Crawford!

You would think that Stern would like to avoid the mere appearance of impropriety by assigning damn near anyone but Crawford to be at today's game.  Take a big, BIG guess as to who has been assigned as the lead referee for Game 7 in Los Angeles.  That's right -- Joey Crawford! 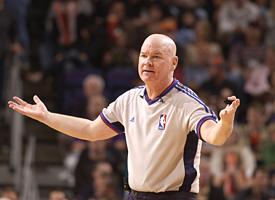 I hate you Joey Crawford.  I know you have an agenda.  I also know that your particular agenda (assignment?) for today is a polar opposite of my preferred outcome for Game 7.  This does not make me a happy person this morning.

This is essentially a memo to Kobe Bryant that errant elbows will be allowed all throughout this afternoon's contest.  At this point, the only thing that would shock me more is if Jake O'Donnell was brought out of retirement to screw the Rockets over again.