It's all over and done with.  Your 2009 Houston Rockets have finally closed the curtain for good.

I could be in a worse mood.  I could be devastated.  I could be angry.  But I've accepted our end result.  And I like this Rockets team too much to be mad at them.

This squad really, really tried.  They did what they could.  Unfortunately, they had a ceiling.  So did the Los Angeles Lakers, but their ceiling was much higher.  It's the depressing reality of the situation.

Rooting for the Rockets has been a mental struggle all series long.  Actually, let me re-phrase that: Believing in the Rockets has been a struggle.  We love our Rockets and what they bring to the table game in and game out.  Rooting for them wasn't the issue.  We had no reason to complain about this team.  But we knew the odds, and the odds were slim.  It was hard to believe in what we were rooting for.

We know our team well.  We know that the Rockets can fight, that they can muster up more courage and heart than the opponent, and that they can surprise quite a few people at times, including ourselves.  But we also know the difference between a road game and a home game, and just how much that impacted the depleted roster that we saw before us.

Entering Game 4, you wanted to tell yourself that your Rockets could prove everyone wrong.  You wanted to believe.  And yet, deep down inside, you knew it was nearly impossible to win this series.  You knew it would take a miracle - an absolute miracle - for the Rockets to advance.  Rooting for them to win, logically speaking, would have been a waste of time.  It was as probable and as obvious an ending as The Bucket List.

But you did it anyway.  And it paid off as much as it could have.  It was all a rarity.  Stuff like this doesn't happen very often.  These Rockets did everything that they could for you.  They put logic aside.  They put statistics aside.  They made everyone forget about "predictions" by actually doing their job on the court.

At the end of the day, the 2008-2009 season, by our initial standards, was a failure.  We had higher aspirations for this team.  Tracy McGrady, Ron Artest, and Yao were going to lead us to the Western Conference Finals or further.  We felt that the only team better than us was the Lakers, and we felt that we could beat them.  Well, we didn't.  Everyone got hurt at some point.  Rick Adelman's rotations were changing daily.  We suffered through Rafer Alston for half the season.  Too much went wrong.  Had you told me our fate back in October, that we would lose in the second round, I would be pretty ticked off.

However, we can not ignore the endless obstacles through which we had to fiercely plunge.  Our season as a whole may have been a failure, but our postseason play was in an entirely different ballpark.  Houston should be proud of their Rockets for what they accomplished in May.  It was a truly remarkable run, and one that I will remember for a long time.  Seldom have I seen such a stand taken by an underdog.  We can only smile when we remember this feisty bunch.

On that note, here's a brief series recap: 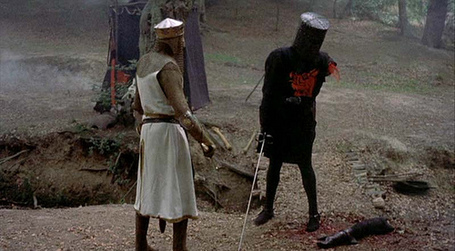 Round 2 with the Lakers began with the Rockets stuck in the same predicament as  the Black Knight above.  Deke was on the bench with an injured leg, leaving us thin at center against one of the more formidable frontcourts in the NBA.  But no matter - turned out it was "just a scratch" as the Rockets won Game 1 in Los Angeles.  We were certainly off to a fantastic start despite our disadvantage.

Then we lost two ugly games that aren't really of note.  To top off our Game 3 home loss, we lost Yao Ming.  Yikes.

By the time Game 4 came rolling around, with Yao Ming pronounced out for the remainder of the playoffs, the Rockets looked more like this: 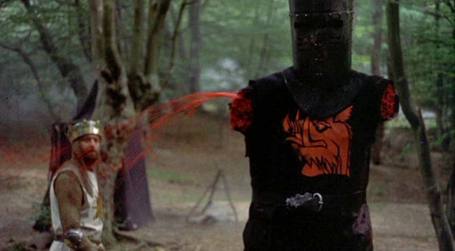 Yes.  It was that "just a flesh wound" mentality that the Rockets employed with Game 4 on the horizon.  They were determined not to lose again at home.  It was simply not going to happen.  They fought valiantly throughout the contest, as the opponent put up little resistance.  We ended up crushing L.A.

Then Game 5 happened.  We won't speak of that again.

With Game 6 on the horizon, we found our swag again.  Soon, we were kicking at the helpless Lakers with every bit of strength that we had within us.  They didn't put up much of a fight. 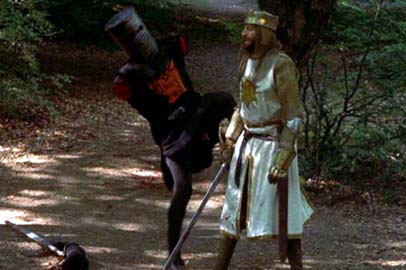 We bled all over the Lake Show en route to a victory in Game 6.  We had done the unthinkable by forcing a Game 7 without Yao in uniform.

Yet, as the fateful afternoon neared, there were doubts.  We had yet to win a game in L.A. without Yao.  The last time out, we had lost by forty.  Things were looking grim. 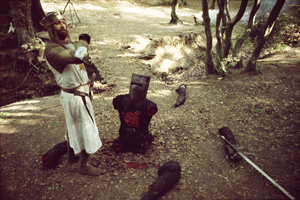 "All right, we'll call it a draw."
[King Arthur rides off]
"Oh, oh, I see! Running away, eh? You yellow bastard! Come back here and take what's coming to you! I'll bite your legs off!"

It was just too much for us to handle.  A draw would have been nice.  Like in Game 5, the Rockets were on the road against a team that had made all of the necessary adjustments.  And so that was it.  We lost, and they won.  It happens.

Not much needs to be broken down about Game 7.  It was nearly the same things we saw in Game 5.  We couldn't shoot to save our lives, we got obliterated in the paint, and Ron Artest was outscored by Chuck Hayes.  The experience of the Lakers proved to be an advantage as well.  Often times, we made some bad decisions that a team like Los Angeles simply wouldn't make in a Game 7.  I thought Von Wafer could have played more, but there is no sense in whining over that now.

Would we have liked to see a better performance from our Rockets in Game 7?  Of course.  Could we have won the game?  Yes - had we made a few shots in the third quarter, we could have brought the deficit down near single digits, and then who knows what could have happened.  But fact is we lost, so we will deal with it the best we can.

All I can say is that we've got plenty of reasons to be excited for next year.  I know you're sick of hearing that.  But it's true.  It's still a great time to be a Houston Rockets fan.