Share All sharing options for: The winner of the Rockets/Lakers series will be the 2009 NBA Champion

Yes, I'm going there.  I have no problems stating it.  Whomever is fortunate to survive the war of attrition that will be the Rockets/Lakers 2nd round series... that's going to be the team that collects this from Mr. Stern in June. 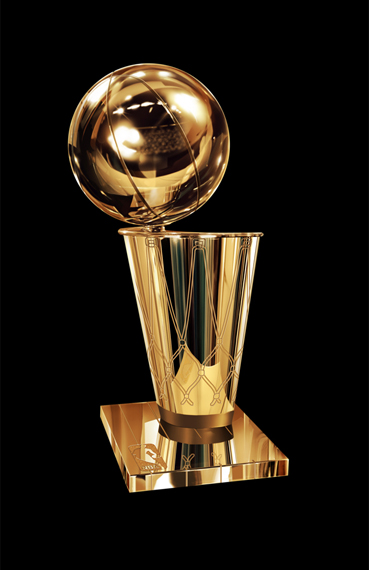 The Lakers are the obvious favorite to win the series, and the homecourt advantage only helps the cause.  Kobe is admittedly on an insane, obsessive mission of types to win his fourth ring this year.  Let's face it, the Lakers are damned good.

Meanwhile, the Rockets just got a massive monkey off their back by winning a first round series.  Which means -- no pressure.  None at all.  While Artest stated to the fans Thursday night that they are not done with their goals, a simple series victory is now going to allow the Rockets to play free and loose.  Don't expect a lot of mental mistakes due to pressure or playing "tight".  Yao is no longer an annual playoff flameout.  Hell, you might even see Coach Sleepy call a play or two now.  Anything is possible.  As Simmons likes to state, the proverbial ceiling has been removed.

The Rockets will be motivated by T-Mac's tears, too (T-Mac said the Lakers are going to win the championship this year.  More reasons for his former teammates to stick it to him.)

And yet... the Lakes are 4-0 against the Rockets so far this year.  Further, the Lakers won an astounding 65 games this year.  And somehow did not have the best overall record.  The Rockets weren't too shabby at 53 wins, but the Lakers regular season was on a whole different level.

I can already hear the peanut gallery:

"What about Cleveland?"
"Aren't you ignoring the Mavericks and Nuggets?"
"The Rockets won't win this series with the referees no longer on their side!!"
(this particular comment probably came from Portland)

Here's why none of that matters -- The only team that is true a matchup nightmare for the Rockets is already eliminated.  (Haha, you suck Utah!)  Denver does not scare me.  Nor does Dallas.  And the Rockets will want revenge for the last game of the regular season if it comes to that.  Over in the East, does Boston scare anyone?  The Rockets own Orlando (Yao > Dwight).  The Rockets have also shown the supposed best team in the NBA how defense is really played.  The last team LeBron wants to see in the NBA Finals would be the Houston Rockets.  (And it's not like the Lakers don't completely own the LeBrons this year either.)

Remember?  LeBron with 0 assists?  Yeah, that was Houston's fault.

Meanwhile, the Lakers are not exactly a great matchup for the Rockets, and all of us here were hoping to avoid Kobe until the Western Conference Finals.  Actually we were hoping that the Rockets could play Dallas... then Denver... and hope that someone eliminated Kobe before the Rockets had to.  But that's no longer an option.  The good news is that the Rockets have a healthy White Pills to throw at Kobe this time around. 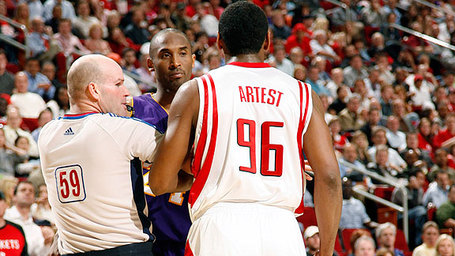 Last four games against the Kobes:

Lakers 93, Rockets 81.  This was the game where fans reached the breaking point in watching Artest dribble around and not pass.  He's been much better since.  This is also the only game where the Lakers faced the current version of the Rockets roster (save for Carl Landry, who will make a huge impact this series).

Lakers 102, Rockets 96.  Also known as the "don't trash talk Kobe!  Noooo!" game.  Kobe was quiet, and then Crazy Pills had to go and say something to him about being the worst player in the world.  Whoops.

Lakers 105, Rockets 100.  Also known as the game featured in Michael Lewis' article on Shane Battier.  Alternatively known as the "f--k you, Rafer!" game where he shanked two free throws at the end.  Again.  Fortunately, Rafer is banished from our fair city and won't play a role in this series.  Yeah, I was at this game.  20 feet away from Kobe when he drained that long 3 at the end.  Ugh.  But there was no Artest in this game.  And no Bynum.  Landry had a MONSTER game of his own.

First game:  Lakers a lot.  Rockets not so much.  Tracy McGrady played in this game.  Or, rather, he kinda showed up and took a lot of shots.  He only made one.  Enough said.  I'm going to ignore this game for analysis purposes.  The Rockets from this game are nothing like the current version.

In reality, the Rockets have only played the Lakers once this year.  The other three games featured players that won't be anywhere the Staples Center or the Toyota Center over the next two weeks.  (Though T-Mac might be in the trainer's room catching up on the latest issue of Vogue magazine.)

What should be the goal for Houston?  Steal one of the first two games in L.A.  That's it.  Steal a game, and hold serve at home in Game 3... that's when we'll see whether the Rockets have what it takes to be a champion.  If the good guys can get past Kobe, there isn't a single team in the league that can stop the Rockets.  This is not going to be easy.  But it can be done.