Share All sharing options for: Your obligatory May 19th NBA Draft speculation 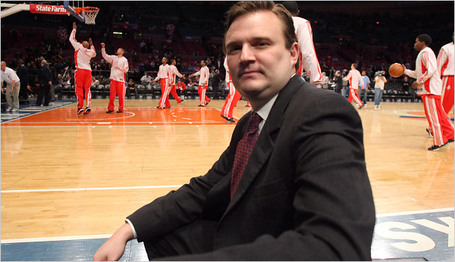 Though today's lottery results don't change a thing for the Rockets, I've succumbed to blogger pressure and will discuss our options...because everyone else is doing it.

We don't have a draft pick.  But we do have money.  Lots of money.  Thus, the word on the street is that we will be buying a draft pick for the fourth straight year, perhaps even a first rounder.  Jonathan Givony of Draft Express hinted at this scenario back on April 20th:

Now, Rockets General Manager Daryl Morey tells us that his team does not plan on standing pat in this draft. "We plan to buy our way back into the draft using some of this money" Morey told us via email this week, referring to the money his team was able to save by trading Francis.

Morey did not specify which round the team will be looking to move into. It's widely believed that due to the global economic crisis, there will be numerous draft picks available in the bottom half of the first round this year as teams look to avoid being burdened by guaranteed contracts.

Likewise, Jonathan Feigen noted, "With no picks in the upcoming draft, the Rockets will try to buy a pick again, maybe even a first-rounder."  So we know it's true, as Feigen never fails.

Buying a draft pick is certainly OK with me.  We are looking to win now, build later.  However, unless a certain player whose identiy I will reveal later is available, we will not be trading back into the first round.  More Feigen:

The Rockets would love an athletic 7-footer who can block shots and hit jumpers. More likely, they will seek a less-expensive role player to fill in when size is needed.

I realize that we would like to grab a center for cheap, but athletic 7-footers who can block shots and hit jumpers aren't normally cheap.  Hell, I would love to have a player like that for a low price, but I just don't see anyone on the market that we could get at this point without giving up a lot or paying top dollar.  Chris Kaman?  Eh, maybe - it would be nice.  But the Clippers are also trying to move Baron Davis, which throws a wrench in the whole process.  You would think that the Clippers would like to package the two players into one deal.  And if you think that Morey is about to pick up Baron Davis' gigantic contract, think again.  As long as Davis is a Clipper, Kaman-to-Houston is unlikely.  That is, unless Morey outduels Mike Dunleavy, which would be very, very likely.  So don't completely rule out any possibility of Kaman just yet.  But don't expect it either.

As for free agent bigs, the list of unrestricteds reads:

I would like Varejao, Zaza, or Andersen, but I think they'll be retained.  O'Neal is too expensive.  Either Swift would be idiotic.  Ratliff is practically done.  Foyle is horrible.  Moore and Howard are just as bad.  And Mihm is worse.  It's an ugly, yet deep list.

What about Blount?  Collins?  Thomas?  Rasho?  You never know.  We'll address this in a later post.

Now for the other possibility: drafting a center.  Feigen said that we could buy back into the first round, which isn't unthinkable in this economy.  And we are looking for an athletic 7 footer who can shoot and block shots, yes?  So what about...(deep breath)...B.J. Mullens.

B.J. Mullens?  B.J. Mullens.  Yes, the athletic-as-hell 7 footer from Ohio State.  It's not too farfetched.  He would fill our need at backup center, and would give us a player to develop behind Yao Ming.  True, he's not a great rebounder and is still extremely raw, but if we could buy our way back into the mid-twenties, Mullens could be there.  This time last season, Mullens in the twenties would be considered a steal for the ages.

I only mention Mullens because, well, there isn't another option in the first round, much less in the rest of the draft.  In fact, this is the most center-thin draft in years.  So consider Mullens your only first round option, assuming we draft big.  For us to reach on someone like Henk Norel in Round 1 would be a stupid waste of money, and Daryl Morey does not deal with stupid.

What if we bought our way into the second round?  Tyler Hansbrough?  Too short, too lousy at basketball.  His shooting form is popular on all-white, middle school teams.  Plus, he will probably go in Round 1 to a team like Utah, which would make my day.

Norel?  From what Draft Express has to say, he sounds like someone we are looking for, so it's a definite possibility.  However, we would like someone now rather than later, and Norel could stay overseas.

Josh Heytfelt?  Possibly.  He's 6'11, is a good defensive rebounder, can shoot it really well, and can run the floor.  Unfortunately, he's a defensive liability, something that doesn't fit our mold at all.  We like big men who are committed defensively, such as Yao or Deke.

Slava Kravstov?  I don't know much about him at all, other than he is a big dude who can play defense but can't shoot to save his life.  Sounds like Kyrylo Fesenko, part 2, but even worse.  No thanks.

There isn't anyone else I can think of at this point, so we'll leave the center talk alone with those name.

Quickly, Morey has stated that developing James White will be a huge priority this off-season, and if we re-sign Von Wafer and Ron Artest, we won't be drafting a guard or small forward.  I think it's clear at this point that center would be the way to go.

However, it is still early, and there is plenty of time for circumstances to change.  This list of ideas is also written with very little research into the subject, so take it with a grain of salt.  Just remember: Daryl Morey is smarter than you, and he has a plan.  60% of the time, he is right every time.