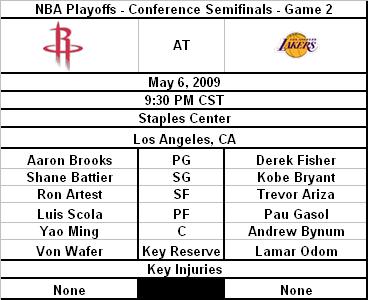 I have two major thoughts going into this game.  First of all, I'm sick of everyone in the media and Laker Nation acting like the Lakers played terribly all on their own.  The Rockets forced those errors.  Shane Battier made Kobe shoot from places that Battier wanted him too.  Yao Ming really is that good, actually he's even better.  So that's enough of that ridiculous line.  Could the Lakers have played better?  Sure, but if the Rockets play defense like that every game of the series, I absolutely guarantee a Rockets series win, with or without LA clicking on all cylinders going into that defense.  Second, everyone is acting like the Rockets are void of talent and the Lakers are the greatest team in NBA history.  Yes, clearly the Lakers are damn good.  Kobe is the greatest player on the planet, I agree with that.  But come on, the Rockets were 1 win against Memphis away from being the number 2 seed.  Alright, now that I got that off my chest, on to the match-ups:

Point Guard
Brooks/Lowry vs. Fisher/Brown/Farmar -  Game 1 was not a fluke.  Brooks and Lowry are better than what the Lakers have to offer at the point.  Why is it that people want to act like LA has no holes?  They don't have many, I can freely admit that, but they are far from infallible.  The Rockets have 2 point guards on the roster that would start for the Lakers, that right there gives them the edge.  No I don't care if your homerism still thinks it's 5 years ago and Derek Fisher is good.  Let's put it this way, I would give Rafer Alston the advantage here, that's how far Fisher has slipped.  Now, this isn't to say that Brown and Farmar can't live up to their potential, just that they haven't, and it's not likely to start in this series.
Edge:  Rockets

Shooting Guard
Battier/Wafer/Artest vs. Bryant/Vujacic - While Battier is the small forward on offense, it is his defense that matters most in this series (and every other one for that matter).  The Rockets effectively stopped in Game 1 (Yes, he scored 31, so what).  Was it luck? (No) Was it planning and skill? (Yes) Did also have an off night partially because he was sick?  (Can't say for sure but given his track record, I'd say clearly yes is the answer).  Want to know the fun part?  The Lakers weren't/aren't built for to win by himself.  They are built for him to facilitate and score within the offense.  seems more cocky than he normally does (that's saying something) and remember I'm not a hater; he's the best player in the league in my opinion.  But right now, after that loss I can feel his cockiness taking over and manifesting in a shooting spree.  If it does, the Rockets winning changes go from 30/70 to 50/50.  If he is only shooting 17 plus foot jumpers it goes to 60/40.  Hopefully the Rockets don't change up the strategy too much.  It worked in game 1, and you'd rather the Lakers win this game since they are likely to anyway, than give up any secrets for game 3 and 4.  Battier should be on as the primary defender 80% of the time with Artest flashing and helping during that.  When Artest does cover he needs to body guard him, but not rough him up.  Keep honest, but don't fire him up.  Is any real basketball fan not excited about the Kobe/Rockets SG match-ups the rest of the way?
Edge: Lakers

Small Forward
Artest/Battier vs. Ariza/Odom/Powell - Last game Dave assessed the Lakers with an edge at the small forward position.  I questioned it because Artest is better than Odom, period.  That said, he was comparing Battier here, and not Artest.  Clearly with rotation and depth, the Lakers have a good combo at the 3, but the fact that Odom will play so much 4, means I’m comparing Artest to Ariza here, and that’s not contest.  Ariza is solid and can be fun to watch, while Powell gives a lot fo the same energy that Carl Landry has given to the Rockets in the past.  I’ve never bought into the Odom hype, but his two man game with Gasol is a thing of beauty.  Hopefully the Rockets can continue to disrupt it with their power forwards ala Game 1.
Edge:  Even

Power Forward
Scola/Landry/Hayes vs. Gasol/Powell/Odom - I have to put a disclaimer here:  I don’t like Pau Gasol, read any comments about him that I have with caution.  He’s just never done anything to impress me past some nice stats.  Yes he produced in most of the time, but was never a true number 1.  Yes, he has produced in LA but he has drawing the double team mostly from Gasol’s man.  Maybe I don’t give him enough credit, in fact, that’s a completely fair criticism.  But his and flopping, combined with a complete lack of toughness don’t demand my respect.  That leads to Scola, who some describe as a flopper.  I don’t agree with that assessment because there is a hug difference between flopping and getting position, drawing the offensive foul on your man and selling the call to ensure poor refereeing does not prevail.  But for arguments sake, let’s say he is a flopper.  Scola is still tough as nails and rarely argues unless he is right (he’s not Deke out there arguing every call).  If you replaced Gasol with him on the Lakers, do they really fall off?  He wouldn’t put up quite the point totals because Gasol is more fluid, but he would rebound more and increase his scoring still.  Landry is better than Powell so this comes down to the fact that Odom plays a lot of power forward and when he is in with Gasol at center the edge clearly goes to the Lakers.
Edge: Lakers - But no where near as big as some think

Center
Yao/Hayes vs. Bynum/Gasol/Mbegna - Will the Lakers double ?  Will the front him? Can Bynum even do that with his knee in the shape it is?  They can’t do what they did in game 1 or the Rockets will be up 2-0.  The X-factor here is whether or not is healthy.  If he is, the double will be most effective when it comes from him on the baseline.  If Ariza is on Artest again instead of on Battier, he will be a non-factor in this as well.  One thing is for sure, Bynum is no match for .  Why is this the shortest section today?  Because is clearly that much better than LA at center.  I also don’t have any answers on what is going on in Phil Jackson’s head.
Edge: Rockets

Prediction: I'm sticking with my original prediction, it's been right so far.  Lakers win Game 2, maybe even in a blowout.  It won't matter though, Rockets are in this for the long haul.