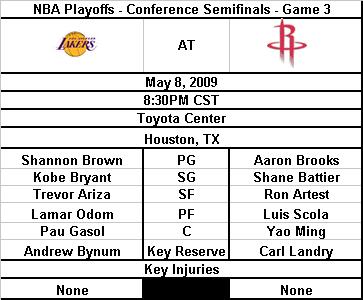 Point Guard
Brooks/Lowry vs. Fisher/Brown/Farmar -  Will this be a rallying point for the Lakers?  It'd be sad if it was since what Fisher did was pathetic, but it's very possible.  Can Aaron Brooks translate his road success to home success?  The most interesting aspect of tonight's game is how much the Rockets will use the two point guard lineup that worked so well in game 2.  It will clearly depend on Phil Jackson's rotation with 1 less point guard that he can play.
Edge:  Rockets

Shooting Guard
Battier/Wafer/Artest vs. Bryant/Vujacic - Shane Battier got the best of Kobe Bryant in game 1, Kobe got the best of Shane in game 2.  I thought it was hilarious that Kobe was yelling "You can't stop/guard me" to Shane when he so thoroughly disrupted him in the first game.  Did he think that was going to get into Battier's head?  Because that is absolutely not going to happen.  Did he really want Shane to focus even further?  I guess we will see tonight.  The Wafer wrinkle is just another interesting story to add to these playoffs.  Wafer has apologized to the team and the fans.  Frankly I don't know what happened, but my guess is both Wafer and Adelman overreacted.  It's water under the bridge now though, Von, given some minutes is going to have a huge game tonight.
Edge: Lakers

Small Forward
Artest/Battier vs. Ariza/Odom/Powell - Will Artest try to take the game over?  Or will he get even more focused and completely eliminate bad shots?  It really could go either way.  I stand by my assessment that what he did after getting elbowed (wherever it was) was the correct thing to do.  He had to show Kobe that he wasn't going to be allowed to do whatever he wanted to do.  Now it is incumbent upon Ron to be Ron Artest and not Crazy Pills.  Trevor Ariza is, as usual, a wild card in this series.  He's been decent but hasn't really had an effect on the games.  Past a few awesome plays he hasn't been anything special.  That could all change tonight, but it will depend on if Kobe keeps shooting or if he starts distributing.
Edge:  Even

Power Forward
Scola/Landry/Hayes vs. Gasol/Powell/Odom - Gasol really limited what Yao could do.  Unlike Przybilla before him, Gasol is actually moving his feet very well and not resorting to arm, jersey pulling and beating on Yao.  This is actually good news because Gasol cannot guard Yao once he gets the ball, he can just force the Rockets to work harder to get it to Yao.  Gasol has been a lot better than I have given him credit for in the past though.  He does all of the little things and works hard on the court.  Lamar Odom has been everything I thought he would be in this series, namely "nothing special".  Luis Scola has had a tough go of it in the first couple of games.  I fully expect him to have a break out game in game 3.  And I'm still not sure why Carl Landry didn't get to play in the third quarter more.  The Rockets have actually had the edge at the power forward spot in this series, mostly because Gasol has been playing center mostly.
Edge: Lakers - But no where near as big as some think

Center
Yao/Hayes vs. Bynum/Gasol/Mbegna - I'm not even going to talk about the Lakers centers since Gasol already was mentioned.  This game rests on Yao's shoulders.  Whether he simply occupies two defenders properly without letting them recover, or he beats the front it hinges on him.  20 points from Yao tonight guarantees a Rockets victory.  I'm chalking Game 2 up to some poorly timed fouls more than Yao not beating the double/front.  He really didn't have the time to do so on the court.  Game 3, 24 and 14 is coming
Edge: Rockets

Prediction:The Rockets are going to win this game, period.