Share All sharing options for: Billy Mays to attempt to sell Von Hawks 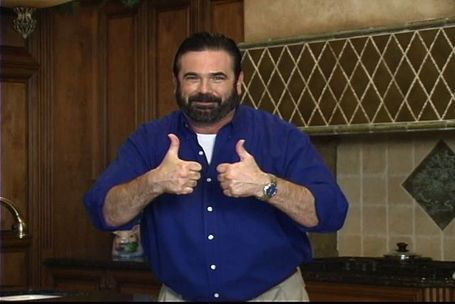 "IT'S INCREDIBLE!  WE'VE ALL SEEN HAIR-DO'S AND HAIR-DON'TS, BUT THE VON HAWK IS DEFINITELY A HAIR-DO! " said Mays, when asked how he was doing.

According to Mays, the Von Hawk is a mohawk-style haircut invented by Houston Rockets guard Von Wafer.  When teammate Ron Artest got the same haircut, Mays knew he had a new product to sell.

"IT'S OUT OF THE PARK, IF YOU KNOW WHAT I MEAN!" Mays said Friday morning.

Though visually appealing, the Von Hawk presents a challenge for Mays, as it is merely a haircut and cannot actually be shipped.  When asked how he actually plans to sell the Von Hawk, Mays responded, "BARBERS!  WE'RE GOING TO SEND THEM COAST TO COAST, NORTH TO SOUTH, EAST TO---," before stopping momentarily to use his inhaler.

An actual copy of the soon-to-be-broadcasted infomercial has been released to the press.  Rumor has it that Mays' selling point is that the haircut will increase one's basketball ability.  A short clip from the infomercial shows Mays thunderously pronouncing that the Von Hawk will "TAKE YOUR INSIDE, OUTSIDE, AND YOUR SHORT GAME TO THE NEXT LEVEL!"

Fellow TV salesman Vince Offer has yet to announce a rival product, only saying that Mays is "an absolute moron."