Playoff Recap: Rockets fail to find their stroke, turn Game 3 over to Lakers 108-94

Share All sharing options for: Playoff Recap: Rockets fail to find their stroke, turn Game 3 over to Lakers 108-94

Here's a list of Houston fan reactions that most effectively sum up Game 3:

That should do it.

There were about three extremely difficult shots that were made over the course of Game 3, and they were all made by Kobe Bryant.  Big surprise.  Otherwise, it was a game of open shots made and open shots missed, opportunities taken and opportunities missed, and a whole lot of turnovers.  Though they did many things well, the Lakers did not win this game.  We lost it in every way possible.

Kobe scored 33 points on 28 shots - that's fine.  Pau Gasol finished 4/11 for 13 points - even better.  As for the other Lakers, there were plenty of solid performances, but nothing remotely memorable.  The Lakers were by no means on top of their game, which says a lot about this loss.  In the second and third quarters, how many times did you see a wide-open Rocket miss a shot?  How many dunk or layup attempts did we either miss or have blocked?  Los Angeles can probably count their examples on one hand.

When Houston closed out on shots and played good defense, the Lakers missed.  But when we failed to rotate and left players by themselves, like Ariza and Farmar and Odom, the Lakers capitalized.  The Rockets can not say the same about their performance.

To me, our fate was decided in the second quarter, when Los Angeles continued to miss shots, and yet we continued to miss our attempts as well.  However, had jump shooting been the only deciding factor, we may have had a chance.  But our bad habits showed up yet again as we turned the ball over seventeen times.  L.A. took advantage and made their offense much easier by running the break.  Again, we can't say the same thing about ourselves, as we only forced six turnovers.  Unfortunately, the only area of the game in which Houston has been consistent this series is in turnovers.  We've had at least 16 each game.  And it has to stop.

We can start by dribbling less and passing more.  All too often we turn the ball over in the paint after trying to dribble through three or four defenders.  Note to Houston: if every Laker on the court is converging on your drive, then look outside, because someone will be open.  I must have seen Shane Battier sitting all by his lonesome in the corner about five times.  He could have pulled up a lawn chair and taken a break, because we weren't about to pass to him.  Which is funny, because he shot a respectable 2/5 from behind the arc.

To further elaborate on Battier, take a look at the Portland series.  When we needed a clutch shot down the stretch, it wasn't Ron Artest shooting the ball; it was Shane Battier.  And if I remember correctly, he went 3/3 on ridiculously difficult three point attempts.  Why go away from Battier in the fourth quarter of this game?  For all of the mistakes that we made in the first half, we actually cut Los Angeles' lead to six in the final four minutes.  It was at that point that Artest tried to take over, completely forgetting about Battier in the process.  It was in that quarter that Battier was wide open the most, and his zero shot attempts echoed to tonight's theme: missed opportunities. 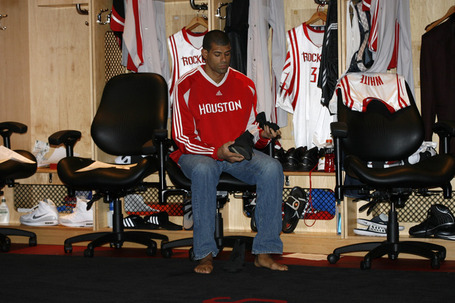 Shane's performance was one of his best of the season, albeit he didn't score much.  He played great defense on Bryant, had four offensive rebounds, eight total rebounds, seven assists, a steal, and only one turnover.  Bravo, Shane.  If only your teammates could help out a little more.

As time ticked away, Artest kept driving.  He had blocked everyone else out of his mind.  It was now Ron versus the Lakers.  We all know how that tends to work out.  The Rockets, a team that has succeeded because of team chemistry and team basketball, had suddenly dissolved into solely Ron Artest.  Finally, to put the Artest's out of their misery, Kobe hit a dagger of a three pointer with about two minutes left to put the Lakers up by eleven.  I turned off my television.

However, because I didn't care to view the final two minutes, I missed a potentially devastating play.  Luckily, I saw a replay.  With about a minute to go, Artest was still trying his hardest, and he didn't want to allow Pau Gasol an easy layup on the break.  So he fouled him.  And that's all it was - a foul.  He went for the ball with his hands, and he slightly missed, knocking Gasol down in the process.  It shouldn't have even been a flagrant.

But, surprisingly, Ron-Ron got ejected.  This wasn't a Dwight Howard elbow to the face, or a Derek Fisher shot to the stomach.  It wasn't a table leg through the heart [just punched my ticket to Hell].  It was a rough basketball play.  However, because Steve Javie is legally blind, even after viewing the replay, the referees decided to uphold the ejection.  It must have been a result of Artest's past.  That's the only reason that I can think of for Javie and his crew to kick Ron out of the game, and even then, it's a horrible reason.

I expect Stu Jackson and company to reduce the foul to a flagrant one, as wrong as that may be.  They'll stick by their officials enough to change the call without making them look like complete idiots.  But let's face it: If Ron wanted to take Gasol down, he could have done something far worse.  Like throw him to Barcelona. 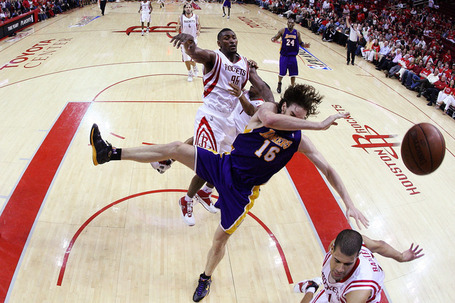 As for the remainder of Artest's game, it was a flurry of missed threes.  He shot 2-8 in all, and these missed shots were particularly gut-wrenching because they were open (by Ron's standards).  Ron doesn't miss open threes - that's how good of an outside shooter he is.  But he just didn't have it.  For once, I don't blame his shot selection, as far as jump shots go.  He took the open shots, and he missed them.

Not sure what Von Wafer was doing out there.  Looked to me like the words "role player" were no longer familiar to him.  It's always great to see him hit open shots and energize the crowd, but that's not the Von that we saw.  Wafer chose to force tough shots off the dribble, effectively killing one possession after the next.  Ever notice that Von doesn't make a whole lot of shots when he is contested?  It wasn't about to change now.

Perhaps Wafer was trying to win back the confidence of his team.  Perhaps he felt that he needed to score 20 points in order to make up for his Game 2 disaster.  Whatever the case, he hurt us far more than he helped us.  He was playing outside of his shell.  Credit the Lakers for some great defense on Wafer, but he made it quite easy for them.

For the first time in a while, the problem with Yao was not getting the ball to him, but rather scoring once he received the pass.  The Great Wall could have scored thirty points had he finished down low and made another turn around jumper or two.  His ankle was obviously bothering him (and will be a concern heading into Game 4), but he didn't sprain it until the fourth quarter.  His nine free throw attempts are a good sign, but his three blocked shot-attempts stood out the most to me.  If Kobe Bryant can race in from the elbow to block a Ming dunk attempt, then so be it - that's great defense.  But Yao was outmuscled by everyone else, and it was embarrassing to watch.  Pretty soon, everyone will be calling him soft again, naive as it sounds.

Remember how our primary advantage in this series was supposed to be our guard play?  Well, you can scratch that off the list for now.  Jordan Farmar and Shannon Brown outplayed Kyle Lowry and Aaron Brooks yet again (mostly Brooks, though).  The most telling statistic of all is that Brown and Farmar combined to shoot twelve free throws.  Brooks and Lowry took only three free throws.  It's not that our point guards have suddenly lost all of their aggressiveness, but on this night, Farmar and Brown were the first to every ball, and once they had it in transit, they were able to go strong to the hole and draw fouls.  They beat Lowry at his own game.

Oh, and so much for Derek Fisher's suspension.  It didn't hurt the Lakers whatsoever, as Kobe is still their floor general.  The suspension did quite the opposite, as our speed advantage was nullified.  We may be better off with Fisher back on the floor in Game 4.

No comment on Luis Scola's performance.  I mean, the rebounds were great, but there is something about him that makes me angry right now.  So, for now, no comment.  It's better that way.

We finally rebounded the way we know how to.  Los Angeles still managed to snag ten offensive rebounds, but we got nineteen of our own, and in all, out rebounded the Lakers 56-43.  It's one of the few fronts on which we've improved since Game 1.

Looks like Phil Jackson is pretty dead set on keeping Andrew Bynum as far away from Yao Ming as possible.  Bynum only played 14 minutes and scored just four points.  But like I said after Game 2, it's a smart decision and causes multiple match up problems for the Rockets.  Luis Scola guarding Trevor Ariza?  Yikes.  Ariza's three trey's made that mismatch evident.

Game 1 was a wake up call to the Lakers.  Game 2 was a wake up call to the Rockets.  And Game 3 was a chance for each team to take a table leg up on the other in the series.  It was all about opportunities, and because the Rockets missed theirs, they are now sitting in a 2-1 hole.  I can't help but relate Game 3 to Game 3 of the Portland series.  It was a win that the lower seed needed to have and didn't get.  It was a game that was winnable, but wasn't won.  Hopefully we won't suffer the same fate as our friends in Oregon.

To state the obvious, Game 4 is a must-win.  We'll keep you updated on Yao's ankle/knee, as well as Artest's status with the front office.  It's time to see what our boys are made of in the most pivotal of games.  We've dealt with pressure before in these playoffs, but that was with a series lead.  Now we will need to make a comeback to see if we truly have what it takes to be elite.  This Rockets team is certainly capable of winning - there is no doubt about that.  But is beating the Lakers too much to ask?  I don't think so.  Anything is possible.  To be the best, you've got to beat the best.  Our chance to even the series starts Sunday afternoon.

On our home floor.