A note on divisons and strength of schedule

Share All sharing options for: A note on divisons and strength of schedule

Found this on ESPN.com: 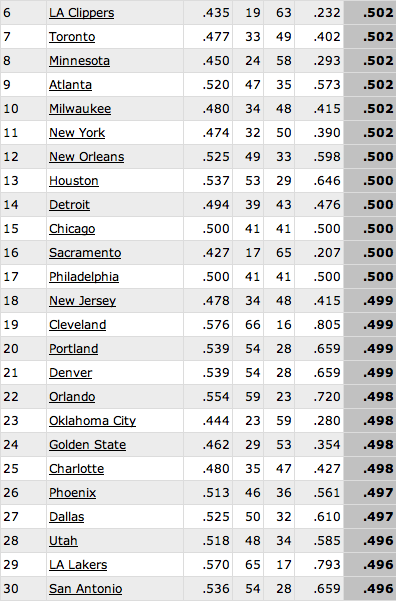 Not a whole lot can be taken away from this, as the percentages of the SOS from the highest to the lowest team differs by only .01.  But I would like to bring something up.

Notice that the two NBA Finals participants are towards the bottom in the schedule strength column.  The Houston Rockets have the second most wins of any team with a schedule strength of .500 or better.  My question is this: Why do we handicap teams with divisions?

We're going to pretend that excuses are welcomed here for a second.  What happens if the Lakers and Rockets swap places?

Obviously, the success of each team is impossible to determine before the start of the season.  But instead of forcing teams in the Southwest divison to constantly grind out wins every year while the Lakers relax in the Pacific division, why not get rid of divisions altogether?

What hurt the Rockets the most this postseason, aside from losing Yao Ming, was the fact that we finished the season as the fourth seed, when, in reality, we should have been the second.  True, we would have eventually run into L.A., but getting to the WCF is much more of a morale booster than getting to Round 2.  Certainly the must-win flop in Dallas can be put under a microscope as far as "woulda, coulda, shoulda's" go, but it did not have to come to that.  Had our strength of schedule been easier, we could have been sitting pretty heading into the final week of the regular season.  Again, we're throwing all logic out the window and replacing it with an epic excuse.  We are not in any way considering all of the wonderful reasons to have divisions in the NBA.  But what's wrong with that?  It's mid-June: I don't have a lot to write about.

It would be nice if each NBA team could play each other twice.  Then, each team could play 14 games against teams in their respective conference.  It would be a 74 game season, and every team's schedule strength would be evened out to a degree.  This post is no attack on Los Angeles, but for example, instead of playing the Clippers, Kings, and Warriors as often, they would have to play contending teams more frequently.  And that example only points to this season.  In five years, things may completely reverse in that division - the Kings, Warriors, and (gulp) the Clippers may be contenders.  But by eliminating divisions, that would not matter as much.  Nothing would be completely and perfectly even, but it would at least be pointed in that direction.

While the postseason serves to filter out the best team of the very good teams, I would at least like for the playoffs to have a more respectable seeding order.  That order would be better determined by eliminating divisions, thus evening out the schedules for each team and providing a better look at who deserves to be seeded where.  While this will not be happening soon, it's something to at least consider.

By the way, I did see a few comments suggesting we do an "offseason overview" of sorts.  When I find time in the next few days, I'll get to it.  Lee has already done some excellent work on this (here and here).  I've done a few draft posts here and here.  I'm hardly an expert on salaries and what could work trade-wise, but I'll provide as much information and extremely biased analysis as possible.  Again, feel free to post anything off-season related in the FanPost section.