I'm torn - who was a better #11 overall pick: Reggie Miller or Robert Horry?

Share All sharing options for: I'm torn - who was a better #11 overall pick: Reggie Miller or Robert Horry?

Ian Thomsen must have been bored of doing mock drafts, because this week he did an article ranking the best players to be taken at a particular spot in the NBA draft (Magic Johnson being the best overall pick ever...).

Now, it kills me that Olajuwon barely got mention in the "best #1 overall picks" discussion... somehow ranking behind the Fat Ass, but I digress.  No, my concern today is about the #11 overall pick.  Thomsen chooses Reggie Miller, who was drafted by the Indiana Pacers way back in 1987.  Damn I feel old.  But was Reggie Miller the best player ever chosen at this spot?  I mean... he was great, and I am a huuuuuge Reggie fan, but this is what Mr. Thomsen said about it:

11. Reggie Miller, Pacers, 1987: This has been a good slot in which to acquire shooting: Allan Houston, Robert Horry and Kiki Vandeweghe were all No. 11 picks, as was Jamaal Wilkes. But none made a bigger impact on the team that drafted him than Miller, a clutch scorer who matured to set a standard of leadership for the Pacers.

Sure, yeah, go ahead and reduce Robert Horry into the Allan Houston/Kiki Vandeweghe category of "good shooters".  I find that to be blasphemous.  Do any of those guys have seven rings?  I think not.  Reggie Miller doesn't even have one ring.  The one time Reggie did get to the Finals, Big Shot Rob was there to block him from the promised land.  For his third ring.  Of what would be seven.  One for both ring fingers and both thumbs. 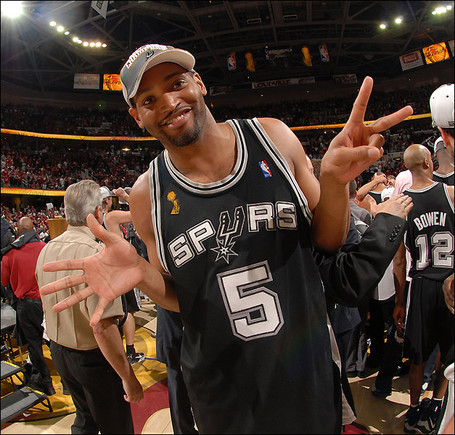 Man, I'm torn... who was a better pick there?  Reggie Miller or Robert Horry.  Both are future Hall-of-Famers, so it's not as easy as it may seem.  And while I am obviously partial to anything Horry does, I gotta admit that the Indiana Pacers might not even exist today if not for Reggie Miller.  So, championships or not, I think I gotta give him the edge here.  He saved a franchise.  That's something that not even Horry can say.

It isn't said enough... Reggie Miller was a badass. 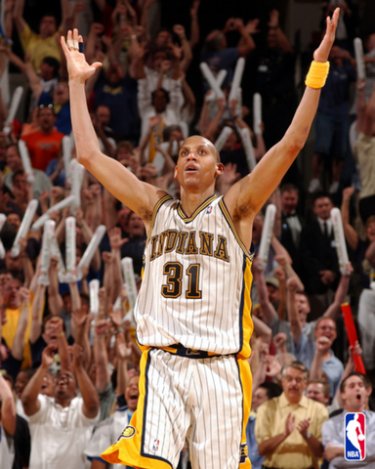 For full disclosure... there are exactly two players whose jerseys I own that never played for the Rockets.  One was Penny Hardaway (that guy was awesome until the knees gave out).  The other is Reggie Miller.  Of course, I own *two* Horry jerseys.  I even own the Rockets' pajama jersey with Horry's #25.  Not that I ever wear it.