Rockets Fans Around the Globe: Argentina

Share All sharing options for: Rockets Fans Around the Globe: Argentina

Send in your submissions to the global quest for Rockets fans.  We'd like as many as possible in order to see where all of you guys are coming from.  Send all submissions to tommartin@thedreamshake.com or tweet them here.

"In my country, most people are Spurs fans.  I believe that I am the only die hard Rockets fan.  I mean, I watch every single game and read The Dream Shake, of course. I've been a Rockets fan for almost 2 years now.  The weird thing is that I have no idea how i became a Rockets fan - I mean I started watching the NBA, and that was it; some days later I was rooting for the Rockets." 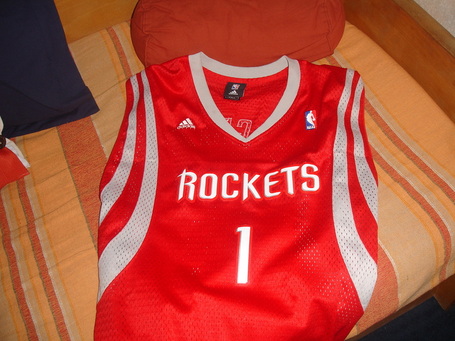 "This is my T-Mac jersey.  I would wear it in the picture, but it doesn't fit anymore."

Let us know where you are!