Share All sharing options for: How the 2009 Orlando Magic are eerily similar to the 1995 Houston Rockets

I've finally come out of my "Houston Rockets eliminated from the playoffs" coma.  It allowed me to closely watch most of the Conference Finals games.  In particular, I got to watch a lot of the Orlando Magic (because their games with Cleveland started at reasonable times).  By watching these games I started to notice some peculiar trends and similarities to my favorite basketball team of all-time.

Yes, it says here that the Orlando Magic are eerily similar to the 1995 Houston Rockets. 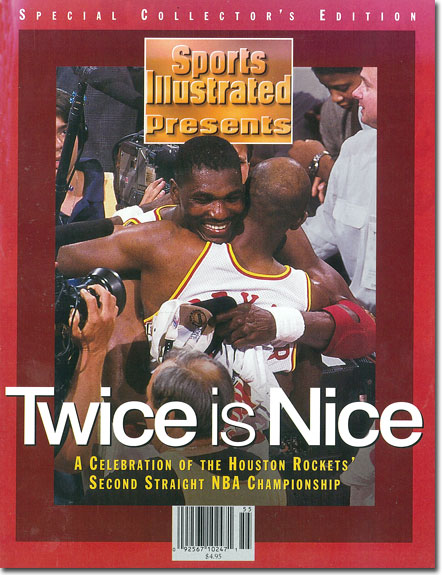 For one, both teams were surprise entrants in the NBA FInals.  The Rockets were a six seed that were supposed to lose to the Utah Jazz in round one (when the first round still had only five games).  Alas, Utah couldn't hold a 12 point fourth quarter lead.  Because Utah sucks, you see.  The Rockets then went down 3-1 against the Suns in round 2... only to crawl out of that hole and give Phoenix the Kiss of Death.  After that, Hakeem de-pantsed league MVP David Robinson and the Rockets coasted in 6 games over a heavy favorite.  Where they proceeded to sweep the Magic in four games in the Finals.

In contrast, the Orlando Magic were never expected to get beyond the second round.  They were a young and impetuous team lead by a happy-go-lucky center.  Boston was supposed to beat them in Round 2... even without the services of Kevin Garnett.  Unless you count "dropping F-bombs from the bench" as an asset to a team.  Orlando went down 3 games to 2 and lacked home court advantage.  No matter... they cleaned up the mess in 7 games and went to face the Cleveland Cavaliers.  While the Magic didn't exactly embarrass league MVP LeBron James in the process, they certainly flustered him and won in 6 games over a heavy favorite.

It doesn't end there.  Not only did the current Magic follow a similar path to the FInals, they did it in a similar fashion.  What do we remember about the Houston Rockets' offense?  Rudy T popularized the "inside-out" game.  The offense begins with entry passes into Hakeem, where he would either score himself or kick it out to open shooters.  Guys like Robert Horry, Sam Cassell, Elie, Clyde Drexler, Pete Chilcutt, and even Kenny Smith.  Most everyone said it was a terrible way to win because the Rockets relied too much on 3-point shooting.  No matter... they won anyway.

Look at Orlando.  They have a powerful presence inside with Dwight Howard.  He's getting much better about passing out of double-teams.  Stan Van Gundy has designed an offense built around the big guy, but also surrounding him with legitimate shooters.  Guys like Rashard Lewis, Hedo Turkey-Glue, Mickael Pietrus, Courtney Lee, and even Rafer Alston.  Again, critics said this was not a way to win in the playoffs.  No matter... Orlando sent LeBron home confused and silent.

An analysis of the rosters is even a good mirror image match.

You have the obvious Hakeem Olajuwon and Dwight Howard comparison.  The dominant 20/10 big men who were also the best defensive players in basketball.  Shot blocking extraordinaires who could alter the game with their mere presence on both ends. 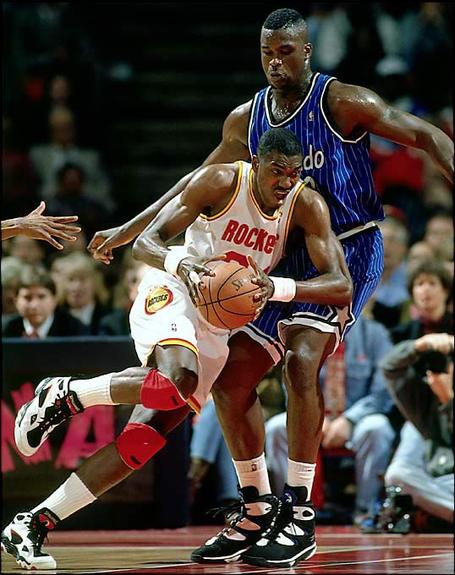 But don't overlook the other similarities...

There's the infuriating point guard comparison.  The Rockets had Kenny Smith (who I still blame for losing the 1993 Western Conference Semi-final Game 7 in Seattle.  You are paid to make jump shots, Kenny.  Yet you couldn't make one. Thanks for nothing.)  On the other side, you have Rafer Alston.  Who sucks.  (It's well-documented.)

You have the surprisingly clutch in the playoffs player.  The Magic have Hedo Turkoglu.  The Rockets had Robert Horry.  And while it's wayyyy too early to compare the awesomeness of Robert Horry to Turkoglu, it's a fair comparison if we limit it to the role these two guys play at the end of games.  Maybe Hedo learned something from Horry in series past? 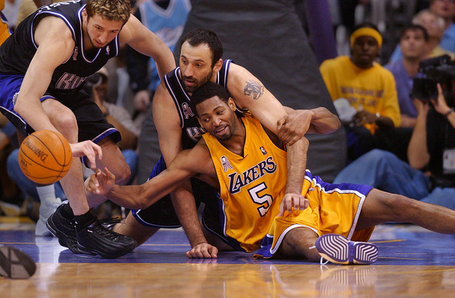 There's also the impact "young" guy.  The Rockets had Sam Cassell in his second year.  The Magic have Courtney Lee (who the Rockets desperately wanted to draft themselves this year.)  Neither player was a starter for his respective team, but both were integral to the eventual outcomes.

There's the proverbial "second banana" all-star swingman on each team.  The Rockets had an aging Clyde Drexler.  Acquired by a mid-season trade.  The Magic have Rashard Lewis.  Aquired by a mind-boggling free-agent contract.  Both know they aren't the star of the team, but they know they are all-stars and they live(d) up to that status most every night.  Both are also native Houstonians.  Which gives me a reason to cheer for Rashard. 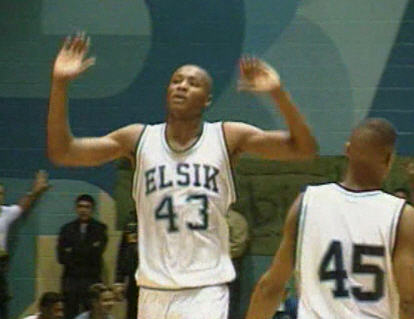 Each team has a token white guy shooter.  The Rockets had Pete Chilcutt (and Matt Bullard the year before).  The Magic have JJ Redick.  All of these guys got no more than 8-10 minutes a game and were horrible defensive liabilities.  But don't you dare leave them open!

Both teams even have the very needed "good luck charm" player rotting on their benches.  The Rockets had Chucky Brown - who was made famous by Charles Barkley wondering who the hell he was.  The Magic have Tyronn Lue - who always seems to be on teams that make deep playoff runs.  Both have championship rings.  No one can really explain how or why.

Even the coaches are similar.  Rudy Tomjanovich was a fan favorite for being a blue-collar guy with a bit of a taste for alcoholic beverages.  Stan Van Gundy is a fan favorite for looking a whole hell of a lot like an adult film star.  Both coaches would be hoarse by the first time-out of any game.  And both are criminally underrated.  (Rudy T somehow isn't in the Hall of Fame... while Stan Van Gundy somehow is the target of constant job speculation.)

There's even a similar underlying storyline...

And oh, yeah... the last time Orlando even made the Finals was when the Rockets kicked their ass.  Which brings back good memories for me.

Though as much as I see the comparisons to the 1995 Rockets... there is one thing that will be lacking for Orlando in the end.  What is that you may ask?  Simple... the 1995 Rockets got a ring.  The 2009 Orlando Magic will not.  Sorry, but Kobe Bryant didn't play on that 1995 Orlando team.  And typically the team with the best player will be victorious in the Finals.  In 1995 that player was Hakeem.  In 2009, that player is Kobe, much to the chagrin of Dwight Howard fans.  Sad, but true.  I think the Lakers close this one out in six games on their home court.