Superman is hardly The Dream

Share All sharing options for: Superman is hardly The Dream

Saw the NBA Hall of Fame today. If you've ever been before, it's a pretty sweet setup, despite the fact that it is shoved in between a Cold Stone Creamery and a Pazzo Ristorante. Felt like I was going to a Radio Shack when I parked. The billboard for the plaza listed all of the attractions: LA Fitness, Hilton Garden Inn, Max's Tavern, Pazzo, The F------g NBA Hall of Fame, and Cold Stone. Loved it.

The museum itself has got a full-size court to play on after you've been through all of the exhibits, which feature jerseys, memorabilia, and best of all, interactive activities to play around on. You know, just in case I got bored of all the incredible basketball history hanging everywhere.

About halfway through my tour, I came across the highlight of my visit: Hakeem Olajuwon's shrine. Okay, so it was just his spaceman stripes jersey and shoe behind some glass, but it was nice to see some recognition for the man, especially after catching a glimpse of the monument built for Paul Pierce around the corner. They do love their Celtics.

Anyway, I took a picture (see after the jump) of Hakeem's box, then moved on to everything else, including the section of the museum dedicated to the Rockets. However, to my great disappointment, they threw the Comets memorabilia into the same glass case as ours. Nothing annoys me more than the WNBA. Nothing.

I concluded by tour by purchasing a DVD from the store entitled "The NBA's 100 Greatest Plays." Consider it my personal contribution to the HOF. After watching the DVD, I counted two outstanding plays involving Hakeem (far too few), and only after viewing those plays (Dream Shake on Robinson, blocked shot versus Portland on the break) did I come to an otherwise obvious realization.

Dwight Howard is nowhere near as good as Hakeem Olajuwon was. And to add to that, he's not even the same kind of player. The comparisons are just...wrong. In fact, if you want a better comparison, look at the history of centers on Howard's own team, the Orlando Magic. Who's that guy who has suddenly become more famous for his Twitter account than his Hall of Fame basketball credentials? Hakeem's opponent in 1995: Shaquille O'Neal.

Before he became an absolute fatass, Shaq wasn't just a handful to guard because of his height or strength; he was athletic too. Very, very athletic. Just about as athletic as Howard.  Granted, he was three inches taller than Howard, but he was of the same mold as Dwight.  His goal was to dunk whenever possible, his free throw shooting was a liability, and he was an excellent shot-blocker.

However, the Dwight vs. Shaq comparisons end there.  As good as Howard is for his age, you can't give him the ball and simply expect him to score.  Take last night's game for instance.  Down the stretch, when Orlando, in the final five minutes of the game, put together their little run to force overtime, who was taking shots?  It wasn't Dwight Howard.  The few times that he caught a pass down low, he would slowly try to make a move before being stripped of the ball.  Passing to Dwight was suddenly off-limits.  It was the exact opposite with his two predecessors.  With O'Neal or Olajuwon, you could dump it inside and expect good things to happen.  You couldn't afford not to get them the ball.

Hakeem was not only faster, quicker, and a better shooter than Howard; he was infinitely smarter.  When watching Howard, all of his moves seem to be carbon copies of what he might do in practice.  They go according to plan, and only according to plan.  He can't adjust to defenders.  If he goes up one way, he's going to keep going that way until he is fouled.  On the other hand, Hakeem could read defenders.  He could adapt his moves on the fly, something that any true post player can do.  And on top of that, he was an elite athlete and had a polished jump shot.  You don't need me to tell you how much that helped.

Dwight's a dominant force, but he's not a dominant basketball player - at least not yet.  Hakeem knew the game, and he knew how to use his talents.  Until Howard can improve mentally, his accomplishments and his talent pale in comparison to Olajuwon's.  It's not an argument. 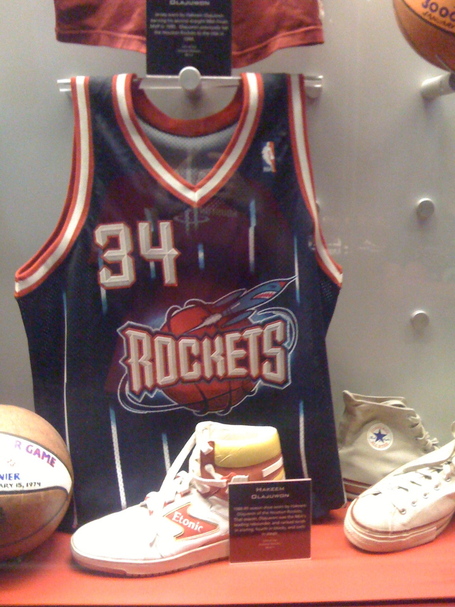 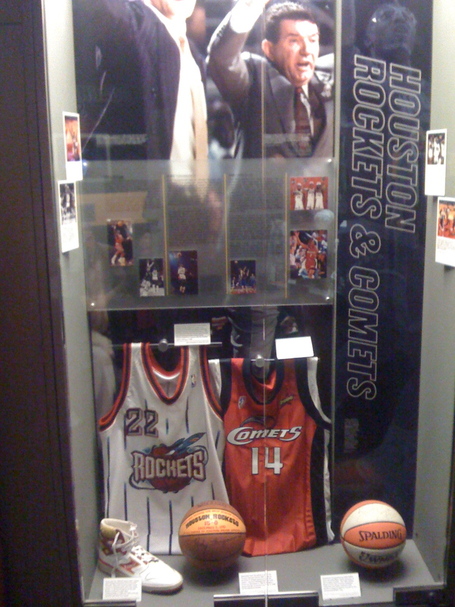