Rockets Fans Around the Globe: Brazil

Share All sharing options for: Rockets Fans Around the Globe: Brazil

I didn't think I would see any more of these pop up in my e-mail inbox.  Luckily, I was wrong. Milton, from Brazil, was on the ball, and sent in a great description of Brazil.  Send in your submissions to the global quest for Rockets fans. We'd like as many as possible in order to see where all of you guys are coming from. Send all submissions to tommartin@thedreamshake.com or tweet them here.

"In our country, soccer is the most popular and the only sport that really matters. I became a basketball fan late in the 80's basically because I sucked on soccer, but also influenced by some of my best friends (that also sucked on soccer).

There were serious problems for the Brazilians who wanted to follow the NBA back then, let alone watch the games, so I took a few years before picking a team to root for. (I didn't want to end up a fan of the Clippers or the Jazz (thanks, lord), you know) And man, let me tell you, everyone I knew was in love with the Bulls!

I started rooting for the Rockets while watching the 1995 playoffs - a.k.a. the "heart of a champion" campaign. Actually, it's not that I started, it's that I just couldn't stop.

As of today, I know very few people that actually follow the NBA, let alone the Rockets. Let's hope someone shows up in the comments!

All the Rockets hardware I have date back to 1996, when my father travelled to America. Believe me, it's hard to get anything Rockets down here.  I've tried." 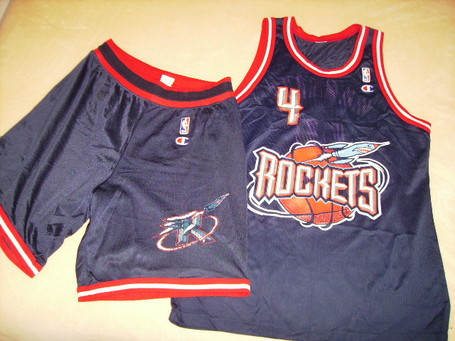 "First, the 1996 Charles Barkley uniform (for the record, I asked for the Hakeem jersey)." 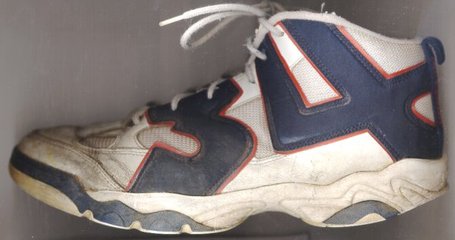 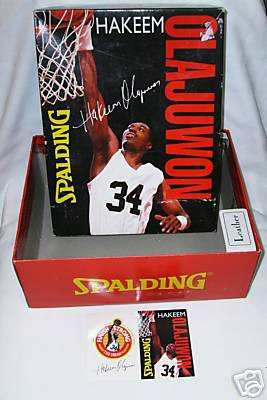 "And second, the Spalding Hakeem 34 "Finish Strong" sneakers (I found these pictures, but mine looked a lot more, ahem, "used" then this when I had to dump them - I kept the box until a few years ago)."

Props to Milton for sending this in.  Keep it up, Rockets fans!