So Yao is out... what next for the Rockets?

Share All sharing options for: So Yao is out... what next for the Rockets?

We know officially now that Yao Ming will miss the entire 2009-10 season.  This hasn't been surprising or shocking for about a month now, but it still sucks to see.  Additionally, while we've heard that Tracy McGrady's rehab is ahead of schedule and that everything is going well post-microfracture -- it's still unlikely we'll see McGrady able to take part in a game until January or February (and whether that's in a Rockets uniform is a whole different matter). 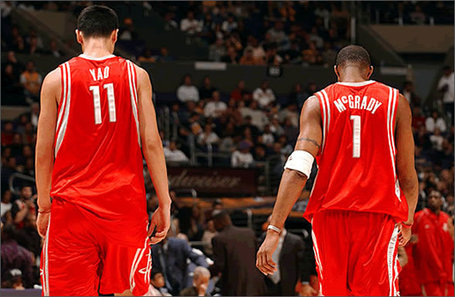 The good news is that Daryl Morey is not sitting on his hands cursing the gods and moaning about how unlucky he is.  No, that's just what I would be doing.  Okay it is what I am doing at this very moment.  So, uh, good thing *I* am not the GM of the Rockets (then again, I would have signed Robert Horry... and how awesome would that have been?)  Nevertheless, the Rockets have a lot of questions entering next season.

But first of all, to everyone who has been complaining about Morey not acquiring a legitimate center to either back-up Yao or to relace Yao:  are you crazy?  This is the complete list of legitimate centers (i.e., guys that actually play the position) in the entire NBA.

(in no particular order)

... that's it.  That's the list.  Now, I know there are a bunch of names you want to toss out to fill the list:  Al Jefferson, Chris Anderson, Amare, Chris Bosh, David Lee... maybe even Tim Duncan.  Here's the thing -- none of those guys are a center.  They may be forced to be listed as centers.  But they are all power forwards... and in the case of Amare and Chris Anderson, they might even be small forwards.  The point is that you just don't go out and "get a center" anymore.  Most teams in the NBA fulfill the center position via smoke and mirrors.  It's been done before.  For the Rockets, however, it is further complicated because you don't just replace Yao Ming.  Every generation has maybe 2-3 legitimate franchise centers.  The Rockets have been fortunate to have three (Moses, Hakeem, Yao).

Therefore, instead of complaining about not having a center... or ripping on Morey for not cloning Yao (though I'm sure the Chinese government is working on it) ... or trading McGrady's expiring contract for Dwight Howard (even if we throw Brian Cook in as a sweetener)... how about we work with what we have?  While I don't expect David Andersen to be the answer to all of our problems, Luis Scola has raved about him, and dammit that's good enough for me right now.

As of today, our lineup next year will be:

off the bench we will have a plethora of bodies, just none taller than 6'10".  Kyle Lowry, Carl Landry, Brent Barry, Jermaine Taylor (?), Joey Dorsey (?), James White, Chase Budinger (?) and the aforementioned Andersen...

/momentary pause while I stop to wipe away a few tears/

Okay, so the Rockets are going to be the smallest team in the NBA next year.  And no one except Aaron Brooks, Kyle Lowry and Brent Barry have the ability to actually dribble the basketball.  No problem.  Rick Adelman's entire system is geared towards quick passing and not one-on-one activity.  And with Battier, Scola and Chuck, you know these guys will play tough defense.  You'll never question the effort of this group.  Plus, it will be kinda cool to see Luis Scola try to be a 20/10 guy (though this will kill our leverage next year when we try to re-sign him).

I just have no idea how we are going to put the ball in the basket.  Center or no center.  A typical Rockets win will probably be of the 82-79 variety.