Share All sharing options for: Adrian Wojnarowski is trying to write Yao's tombstone a bit prematurely

[alternate title:  The rumors of Yao Ming's demise have been greatly exaggerated]

And so it begins. Yao will have surgery next week.  In response, the sportswriters of the world have already begun playing leapfrog to see who can write the first obituary for the NBA career of Yao Ming.  This week's candidate?  Adrian Wojnarowski.

By publishing such hyperbolic guesswork as:

"All across the world, the fears that Yao never plays basketball again are real and justified..."

"Whatever happens, this has turned into one of the sport’s saddest stories. Yes, it’s reminiscent of Bill Walton’s saga, but Yao is a far bigger, far more important figure in basketball history. Yes, Walton could’ve been one of the most accomplished centers in history, but Yao’s powers have been truly transformative."

"Together, they all conspired to use him, wear him out and ultimately toss him aside."

Dammit, stop speaking in past tense as if he's dead!

"His blessing turned out to be his curse: His deftness and mobility at 7-foot-6 could’ve been his undoing. His lower body couldn’t support the agility and crumbled beneath him."

Objection:  lacks foundation; the witness is not an expert in medical issues.

About the only thing that was moderately accurate in Mr. Wojnarowski's sob story (aside from the unnecessary and continued use of past tense) is this:

Basketball has had a lot of folk heroes who never met their promise, but make no mistake about Yao Ming: He met his destiny. He brought the NBA to the world, and the world to the NBA. There are Hall of Fame players with MVP trophies and championship rings who never gave so much to the game. Yao Ming goes away for a year now, maybe more – maybe for good – but his legacy is untouchable.

The only thing anyone knows for sure is that Yao is going to have surgery next week.  Oh, and that his foot kinda hurts, but not really.  Even Yao said he was surprised at the diagnosis last month because he wasn't feeling pain.  A little bit farther north geographically, there's a 7'4" dude named Zydrunas who had a very similar procedure done to his troublesome foot eight years ago.   Big Z came back from that surgery to be a multiple-time All Star.  Yet people want to bury Yao and prematurely assume that he's never going to be the same again.

If anyone can overcome this injury it's Yao Ming.  There isn't another player in the NBA who is more dedicated to his team and to his sport (okay, maybe Kobe).  This article written a few years ago is a pretty good description of how much Yao wants to be great.  It's well worth your time to read.  And I have no doubt Yao Ming will return from this surgery ready to kick ass again.  He may not average 25 and 10 for a full season again.  He may not be able to play 40 minutes a game for 82 games... but who can?  We've always asked way too much from the Great Wall.  Maybe for once we can do him a favor and stop writing him off so early.

Yao Ming will walk through that door again. 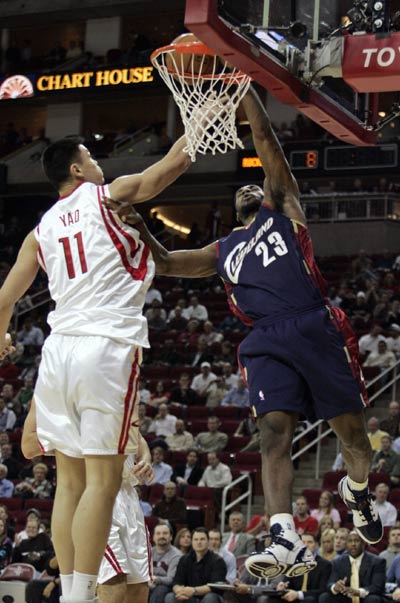