Ron Artest is Twittin' like he just got paid. But he actually didn't.

Share All sharing options for: Ron Artest is Twittin' like he just got paid. But he actually didn't. 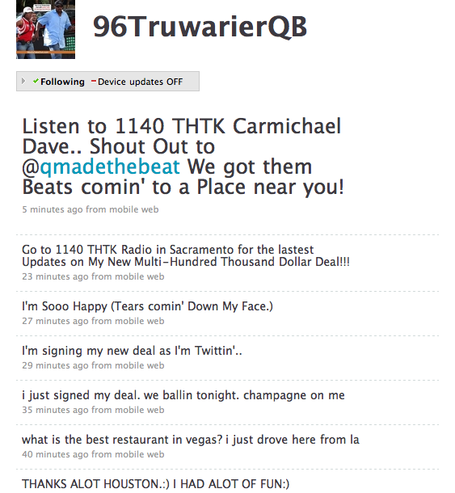 Ron has a sense of humor.  He just told Carmichael Dave that he was kidding.  I hate practical jokes.

However, I do think that this may be the end for Ron.  He was recently in L.A. and talked to the Lakers.  After that, LeBron James met with him in person and made a pitch for Ron to come to Cleveland.  It's tough to see him turning either one of those teams down.  He wants a ring, and it will be much easier for him to get one in either Los Angeles or Cleveland.

It would really shock me to see him re-sign with Houston.

It was a false alarm. A message attributed to Artest — "THANKS A LOT HOUSTON :) I HAD A LOT OF FUN." — appeared on Twitter late Wednesday. Artest’s agent, David Bauman, said that the message was sent by an imposter.

"That is not Ron’s account," Bauman said. "That’s what happens with the so-called new media."

Unless Twitter is straight up lying to us when it says "Verified Account" at the top of the page, you can disregard that statement.