Share All sharing options for: A look at the Rockets 2009-2010 schedule: November 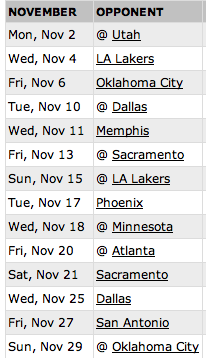 November looks like a butcher shop.   Los Angeles (twice), San Antonio, Dallas (twice), at Utah, at Atlanta - it feels like we're under the knife.  On top of that, perennial stinkers Oklahoma City, Sacramento, and Memphis have improved.  Honestly, the Minnesota game, along with the home games versus Sacramento and OKC are the only sure-fire wins.  And that's assuming that a shaky roster such as the Rockets can really have any "sure-fire" wins.

If there is hope for a decent November record, it lies in the divot-sized chip on our shoulder.  Too many should-be wins were given away in 2008-09 due to a lack of a killer instinct, as the oft-favored Rockets played down to their competition.  This team should overcome that.  Each player is looking to prove his worth whenever possible.

And that includes the fourth quarter, when throats should and will be stepped on.  Pray that we'll be lowering the foot.

On paper, November could be the Rockets' toughest month, and if it is not, then it's right up there with December.  There are three back-to-backs, and aside from Phoenix, each of these teams are as good or better than they were last season.

Of course we'll beat... Oklahoma City on November 6th.  The Rockets will have a day to rest after playing the Lakers, which should be plenty of time for Morey's minions to suck up to Kevin Durant.  LeBron may be 2010, but Durantula is 2011.

It will take a miracle to defeat... Los Angeles on November 15th.  You could argue that beating Utah in Salt Lake City is asking too much of these Rockets.  Of course, you'd be banned instantly for doing so.

Don't be shocked if we beat...  Dallas on the 25th.  Having four days off after the Kings game should bode well for Houston, and while Dallas is loaded offensively, it remains to be seen if they can defend.  A subpar shooting night from the Mavericks could lead to a strong win for Houston.

Watch out for...Minnesota on the 18th.  Big Al is back, and while Minny's draft strategy was quite lame, the Timberwolves have always managed to hang around against Houston in the Twin Cities.  I'm not calling a loss, but I'm not betting my couch on a win either.

Best Case Scenario: Rockets finish the month 9-5, including a win in Atlanta.

Realistic Prediction: Rockets finish the month 7-7.  And hey, a .500 record in November would be fine by me.