Ruminations from the Bench - the NCAA can't vacate my gorilla dunks!

Share All sharing options for: Ruminations from the Bench - the NCAA can't vacate my gorilla dunks!

[scene:  Joey Dorsey gets the news that the NCAA might force Memphis to vacate everything from its 2007-08 basketball season]

Joey [sees story on ESPN about Memphis]:  What the f--k?  They want to take our whole season away?  Can they do that?  Where's Jesse Jackson and the dude with the weird hair to fight for our rights?  This is like a violation of my civil rights or some s--t!

Shit... I better find out what's going on.  That freshman better have some answers for me!

Derrick Rose:  Hey, fuck you Dorsey, I'm not a freshman anymore.  In fact, I finally get paid more than you now.  What do you want?  My brother's on the other line asking about getting reimbursed for travel expenses... even though I already paid his friend for taking my SATs.  Greedy bastard.

Joey:  They say they may take our season away!!  You remember - the year I took us to the FInal Four!  Shit, we could even have won the whole thing if you could make a damn free throw.  Stupid freshman.  You owe me.  Joey only got 2nd place poon that night.  I was all ready to wear my "fuck like a champion" t-shirt that next day, too.  Dammit.

Rose:  How does any of this concern me, Joey?  I did my time, umm, I mean my one year.  Now I'm in the NBA.  I'm a pro, bitch.  Why should I care what happens to Memphis?  That would be like you caring about the skanks you banged on the road that year.  Why would you even care?  Don't you get NBA-quality tail now?  Quit living in the past.

Joey [missing the entire point]:  Oh, shit!  I didn't even think about that!  If they wipe out our season, that ho from your dorm can't be tryin' to collect no child support and shit from Dorsey no mo' - cause the NCAA said it never happened!  Yup, Joey's sexual record be cleaned of bitches from that year.  Good thinkin' freshman.  I forgot how helpful you could be...

Rose [bored]:  Whatever, dude.  Go call Cal and leave me out of this.

[Derrick Rose hangs up... Dorsey frantically gets Coach John Calipari on the phone]

Calipari [nervously]:  Oh, no, Joseph - did they get to you, too?  Just say "no comment".  And promise me you won't tell anyone about that night in San Antonio before the NCAA Championship game.  The girls were not particularly attractive, but they sure had a lot of "personality" if you know what I mean!  Right, Joseph?  Right??

Joey [giddy]:  Coach, that's what I'm calling to tell you!!!  Derrick Rose told me that shit doesn't count anymore!  You don't have to worry about your hot-ass wife finding out about any of that!!  The NCAA is about to rule that our entire year never happened!  Like "poof!" bitches be gone and shit!  You can safely move back to Memphis now because that girl can't file that harassment complaint against you no mo'!

Calipari [annoyed]:  Joseph, that's not exactly how it is going to work.

Joey [confused];  I don't understand, Coach.  Did you go and bang that girl again?  Cause if you did it in the calendar year of 2009, Rose and I can't help you no more.  I think that shit might still count, Coach.  You might want to verify with the NCAA though.  Or just call Derrick.  Freshman seems to have the answers to this particular dilemma.

Joey:  Oh, don't worry, Coach.  Now that they are taking an entire year away from me... I gotta go out and make up for lost time.  I have to double my gorilla dunks next season just to make up for what the NCAA is about to take away from me!  Talk to ya soon, Coach! 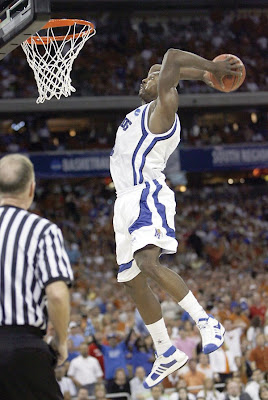