A guide to making Luke Ridnour feel better about himself

Share All sharing options for: A guide to making Luke Ridnour feel better about himself

Or, to put it bluntly: "How to play horrible defense."

The defensive lapses have been appearing much more frequently for the Rockets, and the sad thing is that it's on silly stuff like this.

Here is a brief photo essay dissecting exactly how Luke "Actually Panned Out Better Than Luke Jackson" Ridnour managed to go coast-to-coast against the Rockets with about nine minutes remaining in the second quarter of last night's game against the Bucks.  It irked me so much that I went to all of this trouble to show it to you. 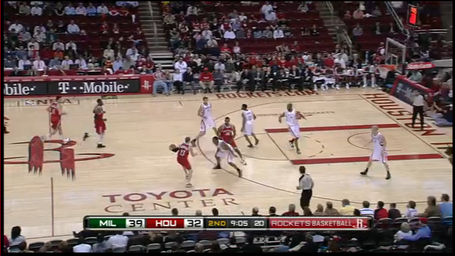 From the start, the Bucks have an advantage: a pick-and-roll is in play, except the defender (Andersen) of the screener (Thomas) is out of position.  This can either allow an easy roll to the basket for an assist, or it can set up a nice driving lane for the ballhandler.  On this play, the latter happened.  Andersen wasn't set, allowing Ridnour to blow by him. 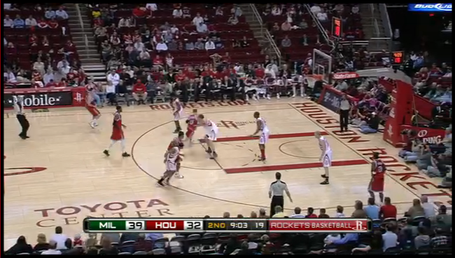 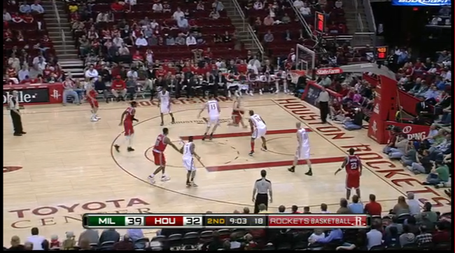 Basically, Carl Landry watched Ridnour take two dribbles against a staggering Andersen without making a single move.  Most elite shot-blockers can afford to wait until the last minute to help on a driving guard (although the really good post defenders are normally a step ahead of the guard and force him to pass or dribble out of the lane).  Landry is a good defender, but he is by no means labeled as a shot-blocker.  This is just bad defense.

Step 4: Nail in the coffin. 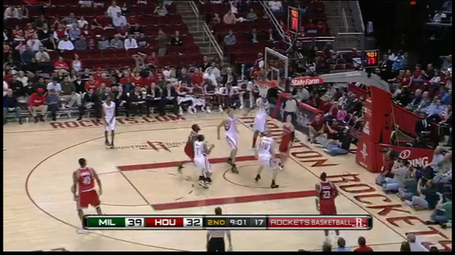 If you can't tell, that's Landry still up in the air trying to block the shot by the time Ridnour has already hit the ground.  And thus, the Bucks have just scored the easiest two points of the entire game.  Thankfully, Luke returned the favor by missing a very makeable shot to seal the Rockets' victory.

It's tiny plays like this that kill the Rockets against weaker teams.  You just don't see them against the Lakers or anyone of that caliber.