Once thought to be masters of "scrappy," it appears that the Rockets have suddenly found a brand new term under which to be labeled: predictable.

Viewing a Rockets game has become akin to watching an episode of Law and Order. Occasionally, the show will end differently than in the previous episode, but otherwise, you already know what's going to happen. Someone is killed. Detectives search. Van Buren tells detectives they are stupid. Big confession. And then it's time for a Jack McCoy inspirational speech. Hey, let's do it all over again next week!

Now, if you put a pair of five year-olds in front of a television set and had them watch three Rockets games, by the time they reached the third, you would most likely hear the following at the beginning of the second quarter: Okay, the Rockets got to score a lot first. Now it's time for them to let the Nuggets score, too. My point is that doesn't take a genius to notice what has become a staple of Rockets basketball, that being the inevitable second-quarter lull.

As usual, the Rockets got off to a great start. It was quite a pleasure to watch. They attacked the paint, made a couple of outstanding passes that led to easy shots, and forced the Nuggets to take contested jump shots.  By the time it ended, the Rockets were up by fifteen. They looked really, really good, and they did it without Aaron Brooks. They even finished the quarter on a high note, with Trevor Ariza stealing an inbounds pass for a jumper as the buzzer sounded. Finally, I thought: this must be it.  The Rockets will finally complete a half.

Naivety, for the win.

One of the surprising weaknesses of the Rockets' has been isolation defense (i.e. guarding an opponent one-on-one). You'd figure that a team featuring great individual defenders such as Shane Battier, Chuck Hayes, and Ariza would thrive when an opposing team decided to go iso. That simply hasn't been the case. The Rockets currently allow the fourth-least amount of assisted buckets per game, meaning that the isolation play is an opponent's best friend. Last night was no different.

As Denver force-fed Nene and Kenyon Martin on the block without much resistance (this brand of offense re-appeared late in the third quarter, and with successful results), the Rockets failed to find any form of offense with which to counter. There were no fast break points to be found. Open shots were passed up for contested shots. Everyone was hesitant to do much of anything. And if you were given the illusion that the Rockets had solved their defensive lapse problem, then think again. 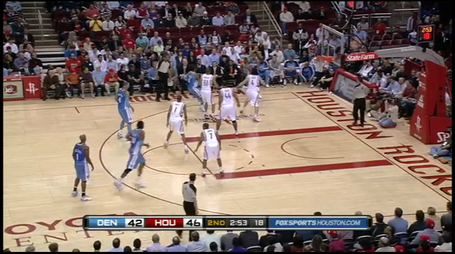 Chuck Hayes has no idea where Nene is on this play. Might he turn and look to see where he could be, before Kyle Lowry is forced to pick him up? 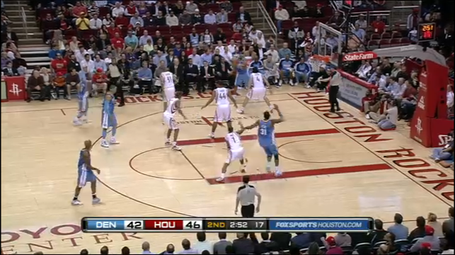 From halftime on, the Rockets and Nuggets kept within a safe distance of each other. It was a back-and-forth affair that would normally make for a fun game to watch. Unfortunately, with whistles blowing every other possession, entertainment was not an option.

I hate writing about refs. It's boring and tedious. You don't like to read about it, either. However, can you expect me to ignore something that had a gigantic impact on the outcome of the game? Each time a Nugget went up for a layup in traffic, it was a foul. As long as things appeared chaotic, a foul was called. To keep things "even," the officials would whistle the Nuggets for loose-ball fouls. This is why the discrepancy doesn't lie in the foul count, but rather the free-throw count (39-19). Without Melo, the Nuggets were still able to win because they took twenty more free throws than Houston. Otherwise, the Rockets' defense was actually pretty good. Oh, and because of some terribly petty calls, Aaron Brooks didn't play but 20 minutes. He scored 22 points. Go figure.

Anyway, despite the bombardment of whistles, the Rockets still had a chance to win the game late in the fourth. It was at that point that the Nuggets began to make shots from places other than the charity stripe. J.R. Smith made a couple of unguardable three-pointers, and Chauncey Billups nailed a contested baseline jumper. Throw in the Rockets' inability to score? Checkmate.

This little funk that the Rockets are in needs to end soon. They must find some consistency in the way they score and in the way they defend. Currently, the Rockets are 17th in scoring efficiency, and 18th in defensive efficiency. All that means is that a few bounces on either end of the court could determine the outcome of the game on any given night. This is not a good thing.

1. Chase Budinger was worthless. He made some terrible passes, and missed some wide-open shots. Bummer.

2. Perhaps the Rockets should consider double-teaming the post more often. Especially if Kenyon Martin has already taken Luis Scola to the hole for a lay-up on back to back possessions.

3. Houston's pick-and-roll execution sucks. I can't tell how often a pick is meant to be a ghost screen, because that is really all they ever are. Thus, the defending point guard is able to easily recover, essentially wasting five seconds of shot clock time.