The Bulls are 5-3 and starting their circus trip. Much like the Spurs' rodeo trip, the Bulls have to face all three Texas teams, then they have to face the Lakers, Suns, Nuggets, and Kings. It includes three back-to-backs, and of course the Rockets don't get any of that second game in as many nights action. The Bulls haven't won on the road yet, but they've only played two games outside of the United Center.

The Bulls should run away with the Central Division. The other four teams they are competing against are the Pacers, Bucks, Cavs, and Pistons. The Bucks could cause trouble, but I see these Bulls as runaway favorites, especially when they get Boozer back. That hurt to write.

Check the matchups for my memo to Kyle Lowry.

Keys to the Game:

On to the matchups...

D-Rose is great. He's become more of a leader this season, and his experience with the national team had to have made him better. 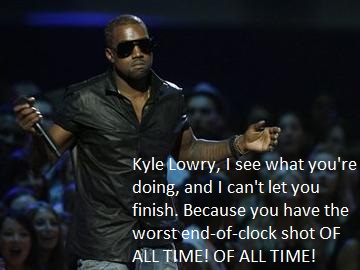 Kevin Martin. All he does is win. As was stated in the Knicks game thread, Martin isn't as effective in the fourth quarter, but the Rockets wouldn't be in most games without Speed Racer. Please give him the ball. And he should be taking those last-second shots at the end of quarters. He might be able to draw a foul or (gasp!) make a shot.

Keith Bogans isn't very good. Let's leave it at that. We all remember him as a Rocket.

Remember when Luol Deng's value was high enough that he could be traded for Kobe Bryant? Yeah, not so much anymore. The Englishman Dukie is having a good year so far, though. 20/6/3 ain't bad, and he had 20/9/6 against the Wizards a few nights ago.

Shane is an enigma. I can't tell if he's washed up or whether he's playing just as well as always.

Scola should kill Gibson. Just dump it down to him and watch him work. If they double, he'll pass out to the three-point shooters. If they play straight up then Scola can use his array of moves to kill the Bulls down low.

Gibson is shooting 60% from the field, but he's only trying to fill in as best he can until Boozer comes back and he returns to the bench.

Brad couldn't guard Amare, so RA pulled him. Understandable move by a veteran coach. I expect Miller to get more time against his former team and to spread the court and keep Noah honest.

I don't know what to think about Chuck Hayes. I thought he played well, but Dave brought up some good points. It's true that the Knicks missed a ton of layups, but that was a nice change of pace from teams making every contested shot near the rim like they had before our trek to MSG.

Noah is one of the best rebounders in the NBA, and does a great job doing the dirty work for a team that lacks other guys who hit the glass. Once Boozer comes back they will kill it collectively on the glass.

Advantage: Rockets if Hill plays. Otherwise, even or slightly Bulls.

Bulls: Korver questionable, Boozer out. The basic lesson here: don't play for the Utah Jazz or you will get injured. Even after you switch teams. Also, don't be a douche.

Prediction: My roommates both made good predictions last time, and we won, so they're up again, with a special guest.

Yaseer: "Bulls win 102-97. Bulls pull away in the third, and the game won't be close despite the score."