Call this one a balanced effort.

By halftime, Chuck Hayes was on pace for a triple-double. By game's end, Kyle Lowry nearly got one, falling only three rebounds short.

Lee finished with nine points on 3-4 shooting (2-2 from behind the arc), had two rebounds, one assist and zero steals. It wasn't a knock-you-dead performance, but when factoring in Lee's fantastic defense on Monta Ellis, there may not have been a more important player on the floor. Ellis finished with 18 points on 21 shots and could not find a way around Lee to the basket. He was forced to pull up from just inside the three-point line far too many times for Golden State's liking. As I told Christian at the game - the TDS folks were there in person - it's much easier to guard Ellis when he isn't having the game of his life, as he did when the Rockets first faced off against the Warriors in Oakland early in the season. Those long, fadeaway two-point jumpers? They did what they were supposed to do. They missed.

You could tell by watching Lee run through screens and handle the ball that he is beginning to learn the offense much better. Sure, performing on offense always becomes easier when playing against Golden State, but on many occasions, when Lee might have pulled up for a jump shot with a hand in his face - as he has done far too many times thus far - he instead passed the ball back around the perimeter and looked for a better attempt. Sure enough, Lee made the shots that didn't require him to shoot over a defender less than two inches from his body.

Jordan Hill is clearly in The Rick Adelman Doghouse For Flashy Young'ins Who Ain't Quite Widdit™. Von Wafer has been there. It is not a fun place. If there is any evidence that Hill and Adelman are budding heads, it's that Hill played less than five minutes against the Golden State Warriors, a team practically built for Hill to jump all over. At the same time, it became somewhat obvious why Adelman may not be gushing over Hill's height: he's not using it very much. On three straight possessions, Golden State took the ball to the rim, either right over or around Hill.

For anyone who is still confused, Jordan Hill is not a shot blocker. Unless he gets a major boost of Jordan Adrenaline on an impending dunk attempt, he can't jump as high as you'd think. And on defense, he finds no such adrenaline boost. He misses assignments constantly and always seems to be a step late on his help. I love Hill's ability to grab offensive boards and hit the mid-range jumper, but until he figures it out on defense, Luis Scola, Brad Miller and Chuck Hayes will continue to see more minutes. They're all one-dimensional, but they excel in that one dimension. Jordan Hill is kind of average at just about everything.

Ish Smith had a -10 in eight minutes of playing time. That is probably not what he set out to do tonight. Dorrell Wright had 24 points for Golden State. Jeremy Lin added eight points. Thus, all is right in the world.

All in all, it was a solid win, and we really can't be picky about wins these days. The Rockets took on a team on a losing streak of its own, took advantage of their opponent's lazy defense and got the W. Well done.

Also, speaking of strange occurrences, allow me to go supercalifragi-ballistic with this next stat: 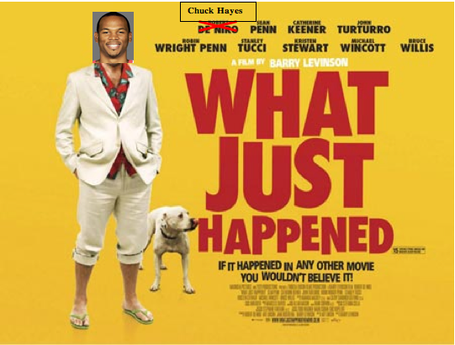 "Remember, remember, the 24th of November, when miss a free throw, Hayes did not.

I see no reason why, on the day all logic died, this should ever be forgot."