Getting Carl Landry The Ball: Just How Difficult Is It?

Share All sharing options for: Getting Carl Landry The Ball: Just How Difficult Is It?

Forget about the Miami game. Just obliterate it from memory. It was stupid.

After thinking more about Jonathan Feigen's piece that I linked to yesterday, I went back and took a look at the film from the 76ers game. Feigen pointed out how Philadelphia doubled or fronted Landry constantly, and how ineffective the Rockets' offense became when they couldn't get him the ball. I noticed the same thing. Anyone who watched the game did.

I took a ton of screenshots of Landry's time on the offensive end, and came up with some solutions and ideas for getting him the ball, as well as ideas for countering a fronting or doubling defense.

Photos and analysis after the jump...

The Rockets start in a double high post with Scola and Landry at each elbow. As Scola receives the ball, Landry will turn and set a stationary screen for Chase Budinger as he cuts towards Scola to receive a pass. Iguodala follows Budinger through the pick, leaving Landry with Brand southwest of the elbow. 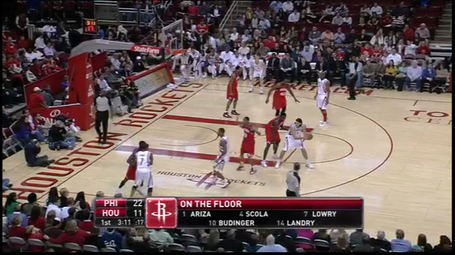 Once Chase catches the pass, two things are in play: 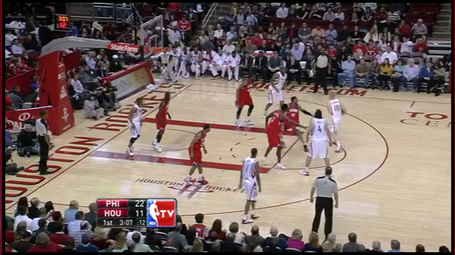 1. Budinger is in great position to make a pass to Landry.

2. Landry isn't going to be fronted at the elbow. This allows for an easy bounce pass, and because Scola is a threat at the opposite elbow, Dalembert isn't going to double. Landry ended up making an easy jumper over Brand.

Exception: This is Carl's first possession on the court, and since Brand is on him, it's less likely he will be fronted. Still, getting Carl the ball near the elbow with Scola at the opposite end allows for a one-on-one matchup. Landry ended up making an easy jump shot over Brand.

Take the ball down the court, wait for Carl to come up to the elbow, and simply pass it and move. If he comes back up to the elbow to receive the pass, he can't be fronted. This is very simple. 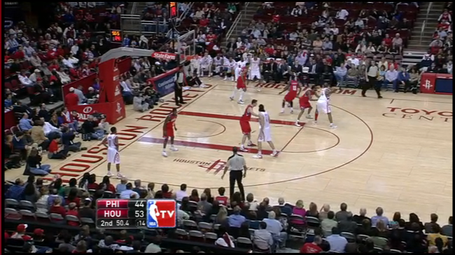 Notice that Scola is also at the elbow, allowing for Carl to pick out a driving lane through the paint. Landry's quicker than most of his defenders, and successfully drives for a short jumper, which he makes. 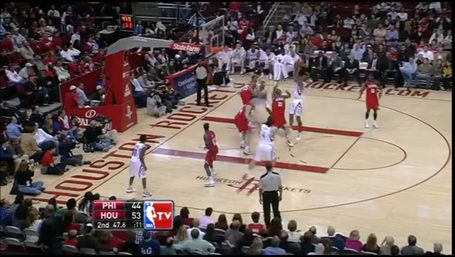 Exception: It would be nice if we could get Carl the ball a little deeper on the block. It's better to tell Aaron Brooks to beat his man off the dribble than to ask Carl to do the same thing. Then again, the purpose of this simple play is to give a playmaker a chance to make a play.

Hit him when he's open!

Landry appears to have good position on Thaddeus Young, if for just a second or two. 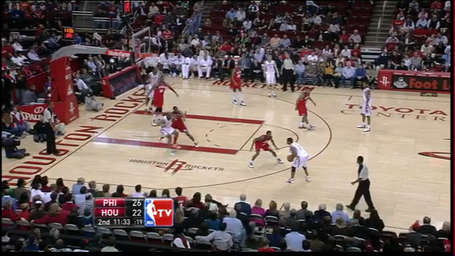 Kyle Lowry fails to feed him right away, allowing the much quicker Young to finally step in front of Landry and prevent an entry pass. 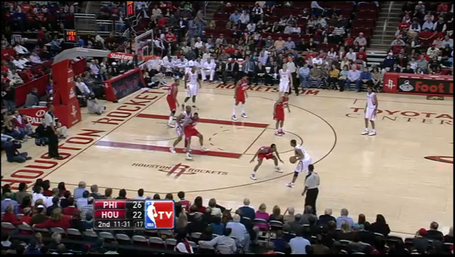 The next time around, Trevor Ariza has the ball on the wing. Carl is able to get open for just a second, but this time, Ariza feeds him right away. 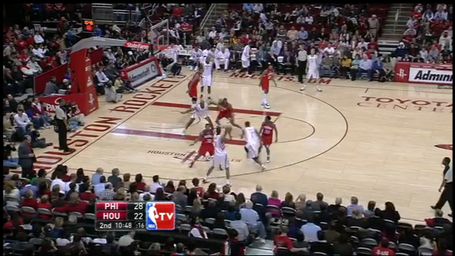 Carl catches the ball in stride as Young is caught off balance, and is able to make a reverse layup inside. If the Rockets are going to make an effort to get Carl the ball, they must recognize how little time he might be open when posting up. This is also an example of Carl's improvement from past years in that he is able to adjust his delivery to the basket instead of just going straight up and getting blocked.

Fake the pick and roll, and just roll

Carl comes towards Aaron Brooks to set a screen. Observe. 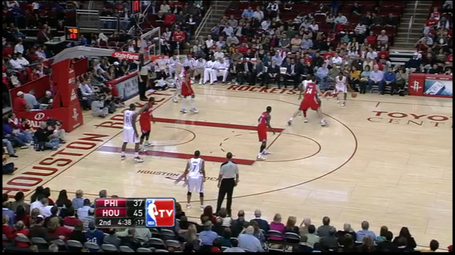 However, instead of dribbling around the pick, Aaron picks up his dribble. Landry immediately cuts towards the basket. Brooks makes a great pass, and Carl catches the ball in stride for a layup attempt. 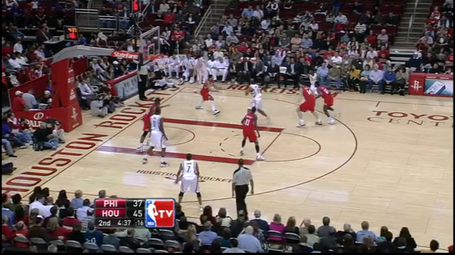 Exception: This usually works only once, before the guard begins to jump the pick, or before Landry's defender plays it safe.

This example, in the fourth quarter, shows Landry hanging around opposite to where the ball is. He should probably move towards the ball to try to post up. 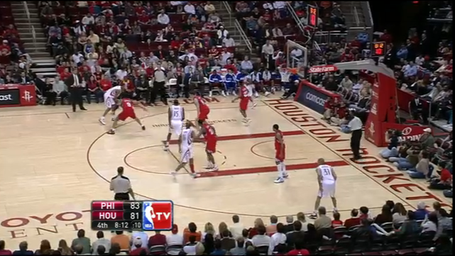 Yet, nothing happens. Interesting. Let's see if he was just pacing himself. Ok... now! 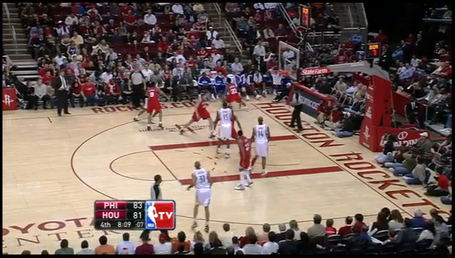 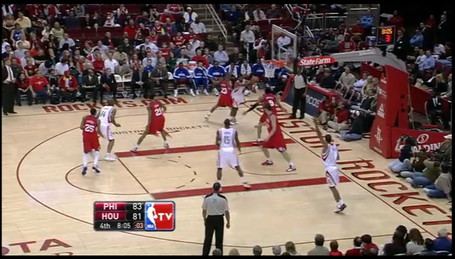 Finally, Landry moves, but by this time, he can't post up, and Brooks is stuck in the corner. Dorsey needs to set a pick, or Landry needs to try and get position on the opposite block himself. At this point in the game, we need to get Landry the ball, and we can't do it if he's not trying to post up.

On this occasion, Landry was actually doubled, both over the top and in front.  First of all, it's a tragedy that it took half the shot clock for the Rockets to first look to Carl in the post. But anyhow, it's impossible to get him the ball when this happens. 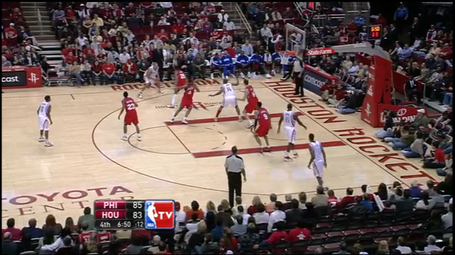 But look what happens when the ball is rotated up top... 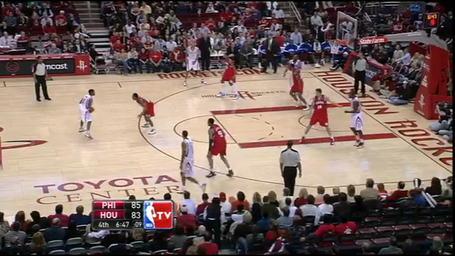 We're back where we are started. Why not try to post Carl up again? Remember what Yao became so effective at doing in the playoffs? Re-posting. On this play, there may not have been enough time to do so, but this exact play repeated itself about four or five times in the fourth quarter alone. We took one look at Carl, and he wasn't open, so we decided to watch Trevor Ariza or Shane Battier hoist up a tough shot.

So, if not Landry, who else can benefit?

Put Scola on the opposite block

On this possession, Landry is fronted in post. Notice that Scola is also on the block with Landry. 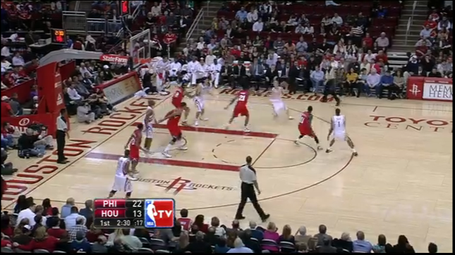 With Landry receiving special attention, there is no help sent to Scola's side of the court. Luis has easy one-on-one post up versus Thaddeus Young, and converts. 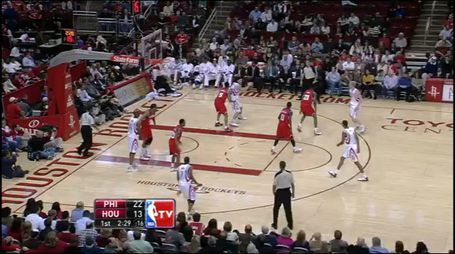 Rarely do the Rockets use two post players (or for that matter, use Landry and Scola at the same time), especially at the end of games. This doesn't make a whole lot of sense to me. Yeah, Hayes is an elite post defender, and much better than Scola, but in certain games, the Rockets need as much offensive firepower as they can get. If nothing else, it reduces the chance of a double team on Landry and opens up space for him to post up successfully.

Other simple ways to get Carl the ball that don't require a camera to discuss:

Joey Dorsey or Scola can be Carl's best friend

Dorsey, on multiple occasions, caught the ball in the paint, took a power dribble towards the basket, causing Carl's man to help, and then Dorsey dished off to Carl for a layup attempt. Chuck Hayes won't normally attract help. Dorsey and Scola will.

Drive the middle with a guard, like Aaron Brooks or Kyle Lowry

This is pretty basic. If Carl's man helps, dish off. If not, open layup.

Send a guard to the corner, try an entry pass from the corner

1. Philadelphia is a terrible match up for Houston. They're incredibly big, and can afford to send quick guys such as Young at Landry without giving up any size in the paint.

2. It's really not that difficult to get the ball to Landry, as long as the Rockets put in the effort to get Landry the ball.

3. Landry's got to put in work of his own. He can't give up after one post-up attempt, and he needs to command the ball late in games.

4. The next step will involve dealing with a double team once Carl catches the ball. However, Carl is much quicker and more explosive than, for example, Yao Ming - it shouldn't be too much of a problem.

5. Free Luis Scola. It will help everyone out.