Consider last year's Kyle Lowry trade A New Hope, a change from old to new. That makes the Kevin Martin deal the Empire Strikes Back of the group, utter brilliance coupled with a swift punch to the gut. And to top it off, to answer any remaining questions, we have the Jordan Hill trade, the ultimately satisfying Return of the Jedi that makes the entire ordeal an absolute masterpiece. Could we think of a better pairing than George Lucas and our own general manager?

It's because of Jordan Hill, and a couple of draft picks that could help solidify our place among the league's best for years to come. It's absolutely worth the bad contract in Jeffries. 100 times out of 100. Best of all, once that bad contract leaves, assuming we don't want to keep him, we're still youthful and still competitive, and able to go after even more talent in either free agency or on the trade market.

I have only two concerns for the Rockets for now - they are with the team itself, not with the trade. Because I really, really like the trade.

For one, this probably means the end of Luis Scola. When this summer approaches and Scola and Kyle Lowry are up, I can't see Morey passing on his cheaper golden boy to bring back a 30 year-old Scola, when Hill will be hopefully taking the slot in a year or two. I'll miss Scola, assuming this is the end. But it's for a good cause.

Secondly, we can't assume that this is going to work right away. Brooks, Landry, Battier, the core of yesterday's team; they all grew up together as Rockets. They learned to play together, figured out who was good at what, and developed unparalleled chemistry. And the chemistry spread throughout the locker room, forming one of the most tightly-knit, resilient rosters in recent memory.

So give it some time. But celebrate, fans. Our GM just pulled off a heist for the ages. 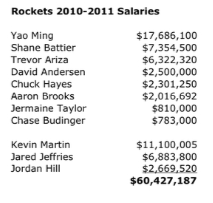