Game 54 Preview: The start of the Speed Racer era.

Share All sharing options for: Game 54 Preview: The start of the Speed Racer era.

Your Rockets take on the visiting Indiana Pacers this evening. The Houston squad has gotten something of an extended layoff from the trade deadline, and they face a Pacers team that lost to the Chris Paul-less Hornets last night. Oddly enough (thanks to the wonderfully weird schedule produced by the NBA this season), this will be the Rockets' first meeting with Indiana this season, and I'm sure most of you haven't watched many of the Pacers' games.

In some ways, the Pacers have a lot to look forward to. Danny Granger is still Danny Granger (though he has regressed a lot this season), Roy Hibbert is improving into a quality NBA player, and they have a few other nice project players.

And yet the Pacers are also a team that has only 18 wins. Despite the presence of Danny Granger, they have one of the worst offenses in the league. Brandon Rush is regressing, TJ Ford still sucks pretty hard, Tyler Hansbrough hasn't quite turned out how Bird and Co. likely hoped (he hasn't been awful or anything, though), and their front office was not able to move any of their expiring contracts (or Troy Murphy, who almost certainly does not figure into their future plans) for draft help or prospects.

I'd like to think that the Rockets and Daryl Morey will provide something of a lesson to teams like Indiana (Memphis, NOLA, Charlotte, Minnesota, etc.), but the experience of Oakland in baseball shows the opposite. For some reason (I'd hypothesize that it has something to do with the kind of people who own small-market teams), bad teams rarely decide to revolutionize their front offices. Instead, if Morey's exploits do anything, guys like Sam Hinkie and Gersson Rosas will eventually be going to already-established franchises.

I'm sure Indy fans will counter that the problem isn't Larry Bird or the current FO, but the legacy of the infamous Malice at the Palace. That may be the case, but I digress.

In any case, this game is one that the Rockets must win. Morey made this clear in his post-deadline press conference. The Rockets have to win games like this, and they need to start winning more games against good teams if they want to make the playoffs.

For the Rockets, this is the beginning of a new era. The T-Mac/Yao tandem is done, and the Martin/Yao era is about to begin. In the meantime, Kevin Martin must learn to play on a winning team. He certainly has experience being on playoff-bound teams, but his blossoming as a star came when the Kings were losing a lot of games. The Rockets have almost thirty games to figure out how our new 2-guard fits with the rest of the boys. Once training camp starts, they'll have to figure out how he plays with Yao.

Consider the following preview something of a guess. We don't know how the Rockets will play alongside Martin, nor do we know what, exactly, Adelman plans to do in these first few games. Jason Friedman calls Martin a "lock" for playing time (with Jeffries relatively likely to see time, and Hill a possibility). I assume Martin will be starting, but I don't know whom he'll replace (Battier, probably, given how much time the Rockets like to give Trevor, as well as Battier's willingness to come off the bench).

The Rockets are now sporting a relatively "small" lineup. They have lots of wing players (though, as has been noted previously, Morey and Co. seem to really like big wings: Battier, Ariza, McGrady, etc.) and something of a dearth of frontcourt peeps. I imagine Adelman will be once again going for a modified (actually effective) version of Nelly ball: look for Ariza/Battier playing the 4. 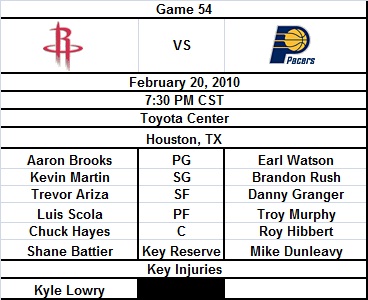 Earl Watson has apparently replaced TJ Ford as the Pacers' starting point guard. As Kelly Dwyer wrote at the start of the season, "I wouldn't trust TJ Ford to run my next scrapbooking workshop," so this is probably a good thing. At the same time, Watson isn't exactly tearing up the court, either, and the Pacers' poor PG corps isn't helping their awful offense. There was a time when Watson was a fairly decent option at point, but that time has passed. Not a terrible defender, but not great. Brooks should be able to exploit the matchup, but (then again) the last time I said that the Rockets lost by 33 points.

Martin replicates so many of Brooks skills (three-point shooter, very quick, poor passer, etc.) that I wonder how effectively the will play alongside one another. Tom briefly went into this on Thursday, and I agree that it shouldn't be too much of an issue, but I suspect that Martin's arrival might eventually lead to Lowry starting and AB coming off the bench as a sixth man.

Rush has something of a reputation as an all-around player and relatively good defender. At the same time, he's inefficient and doesn't contribute much on the glass. Not much else to say, I guess.

Martin hasn't been nearly as good this season as he was in the past, and that's largely been attributed to the "chemistry" nightmare of a Tyreke/Martin backcourt. Still, he's a premier shooter, and I doubt he'll have much trouble tonight. Expect him to improve the Rockets' fast-break abilities.

Granger has had a tough time this season: injuries, declining shooting percentages, teammates failing to improve, etc. At the same time, he's still a great scorer, and he's maintaining his scoring averages, even if that has come with a decline in efficiency.

We all expect Ariza's efficiency to improve after the Martin trade. He'll be able to stop playing the "initiator" on the offense. He can go back to being the complementary player the Rockets signed him to be, and hopefully his experience as the first/second option on offense has taught him some valuable lessons.

Scola is now the Rockets' only real offensive option in the low post. Hill isn't there yet, and there's no guarantee he'll even be getting playing time. For the first time is a long while, Scola will be getting virtually all of the time at the 4, which might mean he'll start proving our "20-10" predictions from the offseason true. Oh, and he'll fourth-quarter time, which is cool, I guess.

Troy Murphy is basically the grand counterargument to Dave Berri's WP48. In case you don't know about it, WP48 basically assigns all credit for a defensive stop to the defensive rebounder. Thus, Troy Murphy comes off as a superstar when looking at WP48. He's super-efficient on offense and one of the best defensive rebounders in the league. He's Berri's dream, and while he's a good player, he's not the best power forward in the NBA. When getting results like that, we have to legitimately ask how one of the league's best players could be on a perennial loser like the Pacers.

Just like Scola, Chuck likely benefits from the Landry trade. Until Andersen improves, Chuck will get a pretty big increase in minutes, I imagine. Still one of the best defenders in the NBA, blah blah blah...

Hibbert is turning into a pretty good NBA player. Right now, he's one of the leaders in blocks, and his rebounding isn't too bad, either. The issue, of course, is that his offensive efficiency continues to be much less than perfect, particularly for a guy who can (conceivably) just rise up over almost all of the players who guard him. But as Chuck shows, height differential isn't all it's cracked up to be. Besides, the NBA is littered with giants who, for whatever reason, could never convert their size into a legit offensive game.

Overall, the Rockets hold a significant offensive advantage. And, even with the loss of Landry, their bench is much, much stronger than the Pacers'. That combination should make this a relatively easy victory (knock on wood).

Who should go to the bench?

This poll is closed