Share All sharing options for: Game 49 Preview: Showdown at the FedEx Forum!

We haven't done one of these in a while (we're lazy, you see), but the Grizzlies interest me enough to motivate me here.

In a lot of ways, the Grizzlies and the Rockets are polar opposites. The Rockets entered the season with a band of ragtag role-players: generally high-efficiency, low-usage types. They included a few young guys, but it's, for the most part, a veteran squad. The Grizzlies, however, had the exact opposite problem: they had "too many" young players who were used to dominating the ball. And then they traded for Zach Randolph (and signed, briefly, Allen Iverson), and the Grizzlies (in my mind, at least) became self-parody.

And yet here we are now: both Memphis and Houston were largely counted out by the NBA establishment, but are currently tied for 9th-place in the remarkably strong Western Conference. The voices arguing that the Rockets would still be a good team sans-Yao were relatively few, but those arguing that the Grizzlies would be any good were even scarcer. Hey, I thought they'd suck. Like, really, really badly, too. My immediate reaction to the Z-Bo trade was, "Wow, another typical Grizzlies trade." Far smarter minds than my own thought the same thing, but now Randolph actually resembles a quality NBA player, and we all look like the idiots. "Who's 'Memphis' now?!" I imagine all the Grizzlies fans shouting to their team's critics.

This is insanity. Both of these teams are huge surprises for the NBA, and I'm reasonably certain that the simultaneous appearance of the Grizzlies and Rockets in the same arena will cause a monumental shock-gasm in all of the viewers.

Okay, so enough about how crazy these two teams are. What's gonna happen tonight? 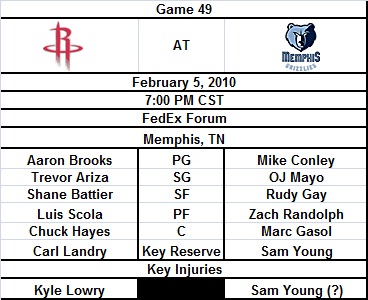 The Rockets, oddly enough, are the most average team in the NBA. They're fifteenth in offensive efficiency (1.072 pts/possession) and fifteenth in defensive efficiency (1.067 pts/poss). The Grizzlies are a little more of a run-and-gun team: ninth in offense (1.094 pts/poss) and 24th in defense (1.097 pts/poss). Going by efficiency differential, the Rockets are a tad better, but it's pretty close, and the Grizzlies are at home tonight.

I'm gonna go with djturtleface on this one: I'm not really impressed with Conley, especially when compared to Brooks. Brooks is a better shooter, their assist numbers are pretty close (with Brooks edging him out this season), and Aaron beats Conley in usage. Just as importantly, Brooks has finally met a starting point guard with worse turnover numbers than him! Where Conley is better than Brooks on the boards, and without Lowry around to clean up the frontcourt's mistakes in rebounding, that's going to be important (though Brooks stepped up his rebounding game in a big way against the Warriors).

In truth Ariza's more of small forward, but the distinction is subtle and I imagine that Ariza will probably be guarding Mayo tonight. Mayo came into the league as a prospective superstar. His college career didn't quite live up to expectations, but everyone knew he was going to be big. Thus far, those expectations haven't quite been met, either. But Mayo is turning into a valuable offensive player in his sophomore year, and I bet that's going to continue to improve. Mayo is becoming a very efficient, shot-creating guard. He doesn't really do much else, but if you're going to pick a role-player to emulate, Ben Gordon and the other bench scorers of the world aren't bad choices. Ariza's impact is more difficult to quantify. He's unquestionably superior on the defensive end, he's better on the boards and elsewhere he's pretty comparable. Except, of course, for his horribly inefficient shooting this year.

In some ways, this is a tossup because of how difficult it is to really value defensive contributions. But, at the same time, Mayo has been really, really good at shooting the ball this season.

Since the trade for Battier, the Rockets are 9-3 against Memphis. The head-to-head matchup of Gay vs. Battier has, I think, favored Shane pretty heavily for a variety of reasons: First, Gay isn't the most efficient of scorers when he's facing bad defenses (though he's much better this year), and so Battier is able to slow him down relatively easily. Second, Gay has been the most important player on his team for his whole career (one could argue that this is not true this year, though), and so stopping Gay was always pretty much stopping the Grizzlies. With more offensive talent around him, this isn't nearly as true as it used to be.

Still, I think the past numbers speak for themselves. Battier is generally able to force Gay to shoot (even more) inefficiently, and doing that against the other team's primary offensive option is critical.

Here we have two very comparable players. Both are excellent rebounders, both shoot efficiently (that's really only true for this year's version of Randolph, but whatever), and both are fairly poor defenders. They both even have reasonably well-developed post games.

The difference this season is that Scola is shooting slightly worse than normal, while Randolph is shooting much better. Ultimately, I get the feeling that this is partly because Scola is being asked to do much more than usual, but the point remains.

Randolph's playing better this season, but we can count on Scola to not be nearly as stupid as this guy.

Did Chris Wallace really know that Marc Gasol was the saving grace of the Pau Gasol trade, or did he just stumble into decency? We'll probably never know, but I'm sure it doesn't matter that much for Grizzlies fans. Marc Gasol this season is like a souped-up, bigger version of David Lee and Luis Scola with a quality defensive game. He makes his living cleaning up his teammates' messes, and he succeeds by being ridiculously accurate and rebounding well. I wish the Rockets had a center like him, I really do.

Well, actually, one could make the argument that Chuck's pretty similar, right? Sure, the Chuckwagon irs even less usage-intensive than Gasol, but he's efficient, he rebounds, he defends, and he plays good team basketball. He's just six inches shorter (and that's an overrated problem, but I digress). Of course, he doesn't contribute as much on offense, and he isn't nearly as efficient.

On balance, I think Gasol wins. Chuck's the best post defender in the league, but Gasol is just better all-around.

In the end, I think the Rockets' main advantage lies in their superior bench. Obviously, the bench isn't quite as good with Lowry missing, and we saw the bench struggle a bit against a depleted Warriors squad earlier in the week. Conley isn't really in rhythm with the rest of his teammates, and even if he were he wouldn't be able to replace Lowry's contributions. At the same time, Landry is vastly superior to anyone on the Grizzlies' bench (Sam Young is arguably their "sixth man," and he's listed as day-to-day), and that matters quite a lot. Probably a lot more than "momentum" or the home-court advantage.