It's that special time of year again: the Superbowl is over, spring training doesn't start for another month, and the NBA is the only thing that matters in sports (hockey doesn't count, and let's all face it - the NCAA kinda sucks). It's one of the few times in the year when you can be sure ESPN will lead with an actual basketball story.

The Rockets face their final opponent before the All-Star Game tonight. Houston badly needs the rest afforded by All-Star Weekend: Lowry's out with an ankle injury (as well as any lingering problems from his knee injury), Ariza suffered a hip injury against the Sixers, and the overall balls-to-the-wall intensity that the Rockets have set for themselves over the past few moths has taken its toll. 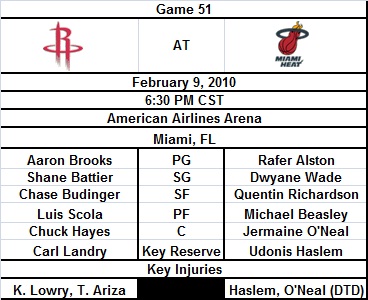 Both the Rockets and Heat are fairly banged up. We already talked about Lowry and Ariza, but Battier's still dealing with lingering problems, as well. For the heat, both Haslem and O'Neal are listed as day-to-day, though both will play tonight. Replacing Kyle Lowry with Garrett Temple isn't exactly a recipe for great success, and while placing Budinger in the starting lineup improves the Rockets' offense, Ariza's defensive intensity will be missed. And it's not like Taylor's been tearing it up in his few minutes on the court (though he hasn't been especially poor, either).

On the macro level, the Rockets have a slight advantage in offensive firepower (1.07 pts/poss vs. 1.06 pts/poss - it's a larger difference than you'd think), while both hold their opponents to 1.06 pts/poss on defense. The Heat are very much a classic Pat Riley team (slow, half-court offense), but otherwise these teams are very similar.

The Rockets, however, are much deeper than the Heat, though this depth is undermined somewhat with the loss of Lowry and Ariza (particularly Lowry). This isn't Memphis-level suckitude for the Miami bench, but the Heat offense relies almost entirely upon the "big three" of Wade, Beasley, and O'Neal.

The last time the Rockets faced the Heat, they were done in by a great game from Wade coupled with a poor game from Carl Landry. Keep that in mind tonight. The Rockets rarely win when Carl has a bad night, and the ability to force Wade into poor shots will be critical (no shit, right?).

Oh, Rafer Alston, how far you've fallen. After getting traded to the Nets as part of the Vince Carter deal, he proceeded to complain loudly enough to convince the New Jersey management to release him. Rejoining Miami, he's basically done what we all expect from Rafer: inefficiently jacking up shots. Unfortunately, he hasn't combined that deficiency with what made him a decent point guard whilst in Houston: good defense and relatively competent floor-generalship. He's turning the ball over more, he's clearly lost several steps, and he isn't nearly as able to create shots or assists. Rafer has entered what may be the final year of his NBA career, and the days when he managed to partly carry the Rockets through the final days of the 22-Games seem pretty long ago. Nevertheless, he managed to find a little of that sporadic brilliance the last time he was in Houston, and we all know he's fully capable of jacking up nine threes and hitting seven of them.

Aaron has to exploit Skip's defensive problems. He has to see this as the Fisher-esque matchup that it is.

Wade is still one of the best (IMO, third after only LeBron and Chris Paul) players in the game right now, and this season's performance has been almost as good as last-season's MVP-caliber effort. He's looking for what will likely be the penultimate contract of his career (provided the next CBA doesn't massively fuck with the length of contracts, I suppose), and it's really a shame that another one of these seasons will be devoted to a complete non-contender. Still, the Heat have every reason to believe that he'll re-sign the summer, and it's really just a question of surrounding him with talent (something obviously impeded by Wade's reluctance to sign an extension).

Anyways, the Heat's recent losing streak is at least partly the result of a slight decline in Wade's production over the past several weeks. He hasn't been shooting quite as efficiently, his rebounding is down, and he's been turning the ball over a little bit more. Small failures sometimes lead to large results, particularly when they're compounded with other small failures, and your team isn't really blowing teams out, anyways. Maybe the Rockets can capitalize on a poor performance from Wade, but I wouldn't bet on it. He can still explode for another great game at any time.

Battier's still doing his thing, lingering pains notwithstanding, and we can expect another solid game from him tonight. With Ariza out, Shane's definitely going to be guarding the superstar, and he won't be able to expect much defensive help from Budinger. Usually that means Battier doesn't shoot quite as much (it's tough to shoot less, but he can do it), concentrating purely on defense, though he'll still take the open shot when it's presented to him. Shane's obviously getting a little older each game, his defense isn't quite what it used to be, but he's still one of the premier defenders in the league. Expect a good matchup.

Chase gets his second start ever tonight (I wonder how Carl feels about that). His last start was back in December against Detroit, a 16-point, 12-rebound effort for his first NBA double-double. He's clearly able to take on a starting role, and his defense thus far has been surprisingly good, even as his offensive contributions have declined slightly over the season.

He'll be facing Quentin Richardson. Q-Rich's numbers have declined a little this year: he's shooting a little less, scoring a little less, etc. That sort of decline is weird for a guy in the middle of his prime, but there you have it. He has played decently for the Heat after being passed around this summer like a box of donuts at a Charles Barkley convention, and I guess that's cool. Ultimately, though, he's pretty much mush: a halfway-decent offensive player in the NBA who turns into $7.5 million in cap space this summer.

Beasley's not contributing the sort of superstar-level games that were expected out of him coming into the draft, but after all of his problems in the offseason, it's nice to see him earn a starting position. He's getting better inside (though the three-point game that many criticized him for last season has all but disappeared), and he's developing into quality NBA player.

Scola isn't quite living up to our expectations coming into the season, but he's still one of the most valuable pieces on the Rockets, even if his position as "2nd-best Rocket after Yao" has been supplanted by Landry.

Overall, Scola's just more efficient, he rebounds better, and both of these guys have glaring defensive issues.

The good news for Heat fans is that O'Neal has turned into something much more than simply a massive expiring contract. He's a valuable part of the Heat, though he's certainly no better than a backup on most winning teams. He has rebounded from a series of decidedly sub-par seasons, increasing his accuracy around the rim and putting in solid defensive efforts. For a team trying to compete for the playoffs and shed salaries, O'Neal would be a valuable piece. One can imagine the Heat packaging O'Neal and Beasley together for a player combo like Iguodala and Dalembert, but Wade's contract situation obviously prevents that.

Hayes is still one of the (if not the) best defensive post players in the NBA. Despite the routine commentary of "HERP DERP ONLY 6'6"!!!" on opposing teams' sites, he continues to put the defensive hurt on other centers. Last time, he held O'Neal to 16 points and 15 shots, and I would expect no less tonight.

They're comparable rebounders, oddly enough (perhaps not oddly to anyone paying attention), but O'Neal's clearly better on offense. That's possibly outweighed by Hayes' superiority on defense. On the other hand, O'Neal defends the rim better, but Hayes keeps more shots away from the rim. It's a tossup.

This is a very winnable game for the Rockets, but it really comes down to containing Wade and outplaying the Heat bench. If Landry plays strong, Battier stops Wade a little, and Temple doesn't fuck anything up, the Rockets win. I'll appeal to that old sportswriter crutch of "momentum," and say that the Heat continue to stumble into the All-Star Game, while the Rockets reverse Saturday's loss to the Sixers. Rockets win 101-96.