Random thoughts on "Chris Bosh as a Rocket" in 2011

Share All sharing options for: Random thoughts on "Chris Bosh as a Rocket" in 2011

Much has been made of the star free agent class of 2010.  LeBron James.  Dwyane Wade.  Joe Johnson.  Amare Stoudemire.  Paul Pierce.  Rudy Gay.  Tracy McGrady.  Even Yao Ming might be one.  But one name continually seems to dominate the rumors in the comments of this blog:  Chris Bosh.

Every time we talk about potential free agents here or potential trades Daryl Morey might make this summer........ someone always feels compelled to mention Chris Bosh's name.  Presumably because he'd be a major acquisition for our team.  And that he might be a better center for the team if Yao Ming is unable to come back at 100%.  Or maybe that he's from Texas and could be the next Hakeem/Clyde to come home and win a ring.

To which I say... uhhhhh... take it easy, Champ.  Why don't you sit this next one out, stop talking for a while.

Here are five reasons why I hesitate to annoint Chris Bosh as being either a smart pick-up or a potential next superstar of the Rockets' franchise:

1.  Bosh has already expressed a desire not to sign with a team from Texas.  Any chance of a hometown discount or for Bosh pushing to be a Rocket -- well, that's just not gonna happen.

2.  Is Chris Bosh really worth a max contract?  According to most reports, sometime soon the NBA and its players will enter into negotiations on a new CBA.  By all indications, the proposed CBA is going to reduce the number of years a player can sign for and also reduce the amount of a max contract (possibly even making the entire "max contract" idea disappear).  If Chris Bosh is acquired via a sign-and-trade and a max contract is part of the package, this would likely cost the Rockets the rights to Luis Scola (we'd probably have to renounce his rights), Shane Battier, and one of our young players like Budinger or Hill.  Not to mention the fact that Bosh would be signed for 30% of the Rockets' salary cap for 2010-11 (approx. $17.3M per year for 6 years).  I don't know about you, but I just don't see this as being a good value when a year from now the most a player might be able to collect is $15M over only 4-5 years.  Morey doesn't seem to be the type to just throw money around.  Though, before you say anything - Yao is worth it because he brings in off-the-court dollars and worldwide exposure that someone like Chris Bosh never could.

3.  If Chris Bosh is your best player, are you really a Championship contender?  I'm just asking........

4.  What has Chris Bosh ever really done?  He has been in Toronto for 7 seasons already.  Yeah, seven years flies by quickly, doesn't it?  Anyway, in his 7 years as a Raptor, the following is the team's record each year:

Chris Bosh's teams have made the playoffs only twice in his career, he's only played in 11 playoff games and he's never advanced past the first round (sound familiar?).  Only once has his team even finished in first place in its own division - and it's not like the Raptors have to battle the likes of the Spurs and Mavericks every year.  Shouldn't a "max" player have dominated the Eastern Conference just a bit more than this?


5.  About the only successful thing Chris Bosh has done was be cast as a member of the Na'vi in the movie Avatar. 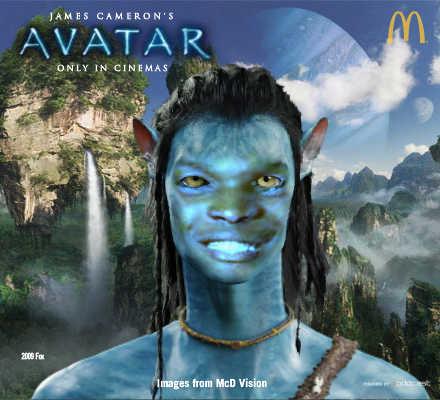 In conclusion.......... in light of the above, I merely ask that everyone slow down on all the Chris Bosh talk.  For one, it's frustrating to talk about something so highly unlikely.  But the "highly unlikely" aspect becomes downright annoying when the myth of the player quickly surpasses his actual on-court ability and likely contributions to any new team.  Yes, he's tall and he's good and he's better than Hilton Armstrong.  But he's not the potential savior of the Rockets.  So, please, I beg of you, let's keep some perspective on this.

(Now, if the Raptors want to sign-and-trade us Bosh for the aforementioned Hilton Armstrong, Jared Jeffries' 2011 expiring contract and a draft pick or two........ then hell yeah, let's do that deal!)