Share All sharing options for: Will Conroy's Missed Opportunity

With 7:52 remaining in the second quarter of Wednesday night's loss to Sacramento, Will Conroy missed two technical free throws. That doesn't sound particularly entertaining. It's just two missed free throws. Gee, Tom, thanks for completely wasting my time, ya jackass.

But not so fast. If you consider the circumstances surrounding those free throws, you'll understand why those misses could be very costly for Conroy.

With 9:14 remaining in the quarter, Coach Adelman pulled Kevin Martin from the game in favor of Shane Battier. Aaron Brooks was already on the bench. This left a lineup of Battier, Dave Andersen, Jared Jeffries, Chase Budinger, and Conroy. In other words, it was a chance for the D-League star to show what he could do when given the keys to the offense.

Conroy began by setting up Andersen for an open jumper, which Dave nailed. Then on the defensive end, Conroy grabbed a loose ball and sprinted towards the other basket before being fouled by Tyreke Evans. It was a clear path foul, an automatic two free throws. The Rockets were down by three. This was a great chance to bring the lead to one with the two scoring studs getting some rest.

At the 7:52 mark, Conroy stepped up to the line, casually took the pass from the referee, and chunked up an awful looking shot that clanked off the left corner of the rim. Even Clyde Drexler remarked how poor an attempt it was. But no matter - it was just a case of the jitters. He'd be sure to knock down the next one, right?

Nope. Clank. Right off the back of the rim. The rebound was in the air long enough to let out a slow sigh of frustration.

If you were looking for a reaction, it wasn't going to come from Conroy. Instead, it was Adelman who looked distressed. Normally, if he's not up talking to refs, Rick is seated forward in his chair, like this. 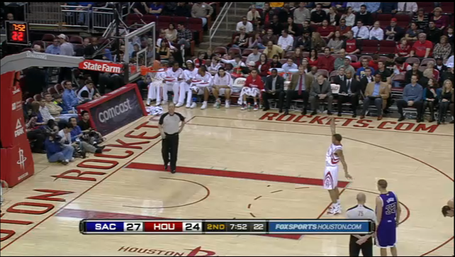 After Conroy's first miss, Rick put his head in his hands. Not an uncommon reaction, but it was, after all, a reaction. 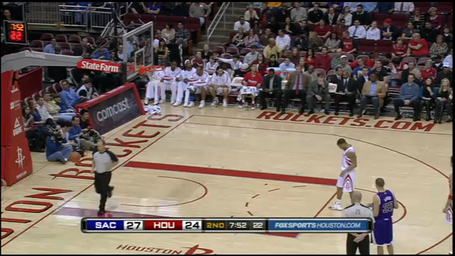 As Conroy took the ball to take his second attempt, Rick sat in his chair like a coach confident in his player. Or not. 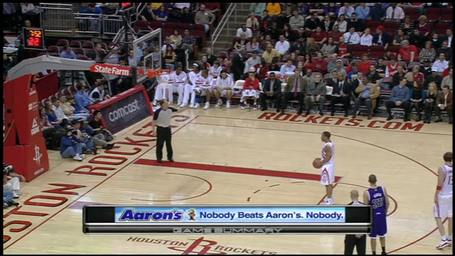 Finally, as Will bricks the second attempt, Rick goes all the way back to looking down again. Clearly, getting Sleepy to move this much meant something had irritated him. 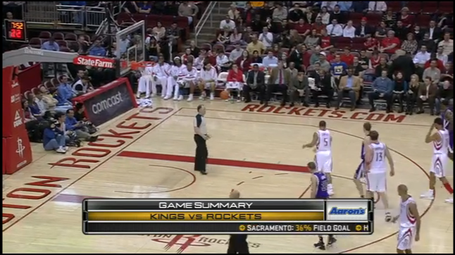 Rookies and 10-day guys like Will don't have a long leash. They have their short moments to make a difference, and if it's a positive difference, then they may get a second contract and a slight increase in playing time. If it's a negative difference, it's almost certainly a guilty verdict. These guys don't get the benefit of the doubt; they have to make their own benefits. Even something as small as two missed free throws in the second quarter can hurt a player like Conroy's chances of keeping a roster spot (especially when the misses are followed up by a three-pointer by Ime Udoka on the other end).

It's not as if Will was battling for a starting spot, because as soon as Lowry returns, he'll likely be called down once again. But who knows what could have happened had Will knocked down those freebies? Maybe Adelman leaves him in the game and he makes a good play. And so on.

Now, perhaps sometime in the near future, it's likely that Conroy won't be given another chance. I doubt Adelman or Morey would demote a guy for simply missing two free throws. But Conroy hasn't done anything to impress anyone yet, and this only adds to his "meh" performance thus far. Even the smallest of missteps can prove costly, especially for someone who desperately needed a favorable bounce or two.