An Alternative Way To Grade Shooters

Share All sharing options for: An Alternative Way To Grade Shooters

John Hollinger has a nice post up at ESPN.com that delves into the shallow depths of a term called "secondary percentage." The statistic was originally conceived by Bill James (yes, the baseball guy), and was brought to the mainstream basketball world by none other than Kevin Pelton of Basketball Prospectus.

Hollinger uses secondary percentage to support the case that Chauncey Billups is one of the best pure shooters that the league has ever seen. It's a bold statement, but by the numbers, Hollinger is correct. But Billups only shoots in the low 40% range from the field, right? Yes, but that's too simple.

Billups makes his money off free throws and three pointers. His field goal percentage may be low, but that doesn't take into account the various ways that Billups can score just by shooting. Thus, if you subtract Billups' field goal percentage from his true shooting percentage (formula = Points / 2 * (FGA + (0.44 * FTA))), then you come up with 19.1%, which is a staggering number. In short, this maximizes Billups' effectiveness as a three-point shooter and free throw shooter, two of the most efficient ways to score in basketball.

Does this kind of efficiency sound familiar? Yes, because it applies to Kevin Martin in the same way. Much like Billups, Martin scores from behind the arc and at the free throw line as often as possible. Thus, he leads the Rockets in secondary percentage.

Here is the complete list of current Rockets who have played in 19 or more games: 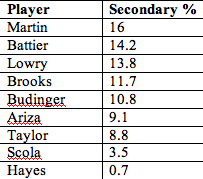 As you can see, this is a statistic that pertains to outside shooters, so Luis Scola and Chuck Hayes aren't of much significance in this respect. Perhaps now you have a greater appreciation for how efficient and effective guys like Martin, Shane Battier, Aaron Brooks, and even Kyle Lowry are as shooters. If you're still a bit confused, take a second look at the Hollinger article - it explains things quite well.