It is official.  We are in the offseason.  The Rockets' season is over.  For the first time in this blog's existence, there will be no playoff joy in Mudville.  No teams to irrationally hate over a seven game series.... except...

for the next 2 months my loyalty shifts temporarily from the Rockets to whomever is playing the Utah Jazz.  Because I really, really hate the Utah Jazz.  And with Duke winning the NCAA Tourney and FIGJAM winning the Masters, I just can't take another team I dislike being champs.  Fuck Utah.

Meanwhile, this blog will not go dark until October 2010.  'Cause we got shit to talk about.  Namely, reintroducing naughty language into this blog to remind our readers that only Tom considers himself a journalist.  The rest of us are shit-talking fans.  Pure and simple.  Besides, if you can't handle certain words, the Internet isn't a place you should be visiting anyway.  And there has been a distinct lack of "whimsy" here in the recent months.  I blame it on Joey Dorsey getting traded.  So, with no actual games to bitch about, we get to pick on players, coaches and NBA transactions with a bit more specificity.  Or maybe dedicate the next six months to getting Rudy T into the 2011 Hall of Fame Class (and Robert Horry into the 2014 class).  Just a thought.

But before we get to that point, let us quickly close out and recap the 2009/10 Houston Rockets season.  Considering that sports blogs exist on two fundamental tenets:  (a) top 10 "lists" and (b) gratuitous photos and or mentions of Erin Andrews a/k/a Erin Pageviews, I hereby present you with 10 reasons to be happy the Houston Rockets season is over (and indirectly why we should greatly anticipate October 2010).

With no further delay... be glad it's over, because:

10.  That means the Rockets no longer have to start a 6'6" dude at center.  Look, I like you Chuck Hayes.  I really do.  But I like winning more.  Starting an unathletic, slow and dwarf-esque guy at center who is shorter than most shoooting guards... well that's just not a recipe for long-term success.  It worked to start this year, but teams quickly caught on and Chuck's minutes per game eroded faster than Tiger Woods' credibility post-Turkey Day.  In six months, some random guy name "Yao" will be starting.  He is a full foot taller than Chuck.  12 freakin' inches.  Just sayin'.  In a sign of optimism, I suggest Yao just fire his tailor and prepare to never be inactive again. 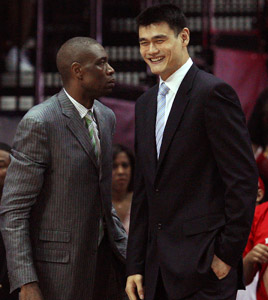 9.  Trevor Ariza has six months to learn how to dribble a basketball.  There really isn't anything else to add.  Except to say that for a player with so many ball-handling responsibilities in Coach Sleepy's offense......... Tweek is just awful at controlling his dribble.  I know kids playing junior high basketball that have better fundamentals. 8.  The NBA Draft is only 2 months, one week and 3 days away.  Given Daryl Morey's short but illustrious history as the Rockets' GM, the Draft is where the Rockets kick more ass than Happy Gilmore after he learned how to putt.  And now the Rockets have assets to work with.  Uh oh!  (Though, a little note on the NBA Draft:  Fuck you, New York Knicks for giving the Utah Jazz your pick this year.  Now they might get to pair Deron Williams with Evan Turner.  That gives me nightmares.)  But seriously, in 2007, Morey turned nothing into Carl Landry.  And shortly thereafter a random guy from the Euro leagues named Luis Scola.  Not to mention drafting our favorite midget ABZ.  In 2008, Morey again had his hands tied yet still delivered us Crazy Pills after trading for Donte Greene and letting him gun his way to a 40 point summer league game.  Oh, and this is also the draft/trade where we got that Dorsey guy.  In 2009, Morey bought another couple picks and secured Chase Budinger and Jermaine Taylor.  Not bad.  There's a reason we consider Morey to be a genius or something.

7.  Staying with the draft theme, I fully expect Daryl Morey to bring me a random rookie personality that I can turn into a parody character next year.  The roster currently has too many nice guys and Shane Battier's been around too long for me to all of a sudden turn him into a caricature.  Even though he's perfect for the role.  I mean, the dude has a karaoke contest now.  And he does karaoke all over midtown.  It's almost too easy to poke fun at - and simultaneously awesome.  So I better have that to look forward to (and indirectly, every reader here, too).

6.  This summer may be the first time a group of sports fans can say "Wait 'til Next Year!" and truly mean it... and not be seen as fair-weather fans.  The 2009/10 Rockets never really had a shot.  They played hard, they played tough, but they just lacked the ability to grind it out against the parade of superstars that dot the NBA landscape.  By February they simply got worn down.  Why?  Because it's fucking hard to win in the NBA.  Even the worst team in the league would destroy an all-star team of college athletes.  With ease.  Next year........ the Rockets get to take out all that pent-up aggression on the rest of the league.  Especially the Great Wall.  I greatly anticipate this.

5.  Coach Sleepy can go into hibernation.  He has been looking stressed.

4.  We no longer have to think about, talk about, discuss or criticize any of the following players:  Rafer Alston, Tracy McGrady, Luther Head, Brian Cook, Hilton Armstrong, and Brent Barry, among others.  They are all someone else's problem now.

3.  We can look forward to the Rockets focusing all of their energy on re-signing Luis Scola and Kyle Lowry.  For the last handful of years, the Rockets have always had a major hole in the roster.  Be it a power forward (2004-2007), point guard (any year where they didn't have Sam Cassell up until drafting ABZ), a shooting guard (ever since that T-Mac guy forgot how to run or jump), or a shot blocking big guy (okay, we kinda still need another one of those).  The Rockets now have an excellent blend of veteran leadership (Yao, Battier, Scola) to mix with an influx of young, athletic players (ABZ, Budinger, Hill, Taylor, Ariza).  Bring back Scola!!!  Bring back Lowry!!!

(If for no other reason... I'd love one day to hear Scola randomly start talking about the time he scored 44 points in a game like he is Al Bundy or something...)

2.  There might be a return of the Rockets featuring the most awesome sight in basketball:  a 7'6" Chinese man being the designated technical foul shooter.  Granted, Kevin Martin kinda kicks ass at free throws and may even be better than Yao, but please do not take this away from me.  All those years people excused the FatAss for being unable to shoot free throws... then Yao comes along with perfect form and fundamentals and makes him look like a dick.  (Eat the soap, rook!)  That's always outstanding.  At least I will not have to worry about Brooks choking away clutch 4th Q free throws anymore.  I want to really like him, but his late-game shooting at the line makes me cringe.  I have eternal faith in Yao.

1.  Okay, I admit.  I was wrong.  The Rockets far surpassed my "they will only win 35 games" prediction.  But was I really that wrong?  It was often painful to watch the Rockets play in January and February.  They failed to make the playoffs.  Next year will be completely different.  I promise (hope?).  Before a single trade/signing is made... I'll call it now:  the 2010/11 Houston Rockets will win 57 games.  Yes, 57.  (If for no other reason than the fact that "56" is a number often referenced and confused by some overrated hitting streak in a different sport.)

Now bring on the offseason.